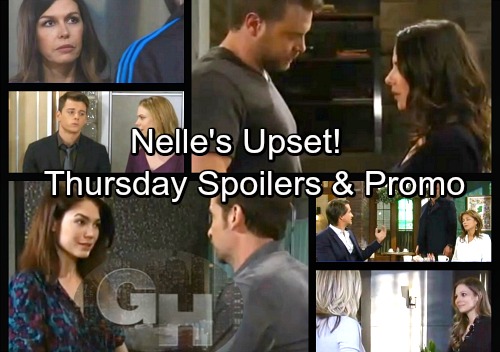 General Hospital (GH) spoilers for Thursday, March 22, tease that Carly (Laura Wright) will want to have a little chat with Kim (Tamara Braun). She’ll suggest that she’d like to talk about Josslyn (Eden McCoy) and Oscar (Garren Stitt). The teens assured their parents that they weren’t even thinking about sex, so this must be about something else.

Perhaps Carly’s just worried about Joss falling so hard. This is Oscar and Josslyn’s first major romance, so heartbreak seems inevitable. Most people don’t stick with their first love forever. Carly may hope that Kim’s taught Oscar how to be gentle. She just doesn’t want her baby girl to get hurt.

Kim and Carly will be on the same page, so maybe they’ll advise the teens to slow down and keep things in perspective. Meanwhile, Nelle (Chloe Lanier) will have a tense conversation with Michael (Chad Duell). Since Nelle managed to blow Michael’s date for him, he obviously won’t be in a good mood.

Nelle will face some frustration when Michael doesn’t seem concerned about Carly. She’ll argue that Carly’s completely unhinged – at least when it comes to her. Nelle will think it’s horrible that Michael can’t see it, but he won’t believe his mom is the problem. Michael will probably just give Nelle a lecture about pushing Carly’s buttons instead of backing off.

Across town, Alexis (Nancy Lee Grahn) and Finn (Michael Easton) will sit down for a conversation. When Julian (William deVry) runs into them at Kelly’s, he’ll decide to make some trouble. It’s clear that Alexis and Finn’s friendship rubs Julian the wrong way, so Finn will call him out on his issues.

Other General Hospital spoilers say Andre (Anthony Montgomery) will meet up with Anna (Finola Hughes). He’ll want updates on the Heinrik hunt, but she won’t have much to go on. Andre will encourage Anna to live her life instead of getting hung up on all this. He understands her goal, but he doesn’t want this mission to be all she thinks about.

At GH, Liz (Rebecca Herbst) will push Franco (Roger Howarth) to come clean with her. They already talked about Jim Harvey’s (Greg Evigan) claims and the staircase incident, but Liz doesn’t have a grip on the story yet. She’ll want Franco to tell her everything he remembers, so he’ll be brutally honest about his possible murder attempt.

However, Betsy (Deborah Strang) intends to tell Franco and Drew (Billy Miller) the truth soon. Jim’s the baddie in this story, not Franco. That news could help Franco and Liz as they try to mend their slightly broken relationship.

At home, Sam (Kelly Monaco) will ask Drew for details on what happened with Jim. She may be curious about Drew and Franco’s time in the basement as well. These two seem to have formed a bit of a bond, so that’s sure to be an interesting development for Sam.

It sounds like General Hospital has another great episode in store. We’ll keep you posted as other GH info comes in. Stay tuned to the ABC soap and don’t forget to check CDL often for the latest General Hospital spoilers, updates and news.