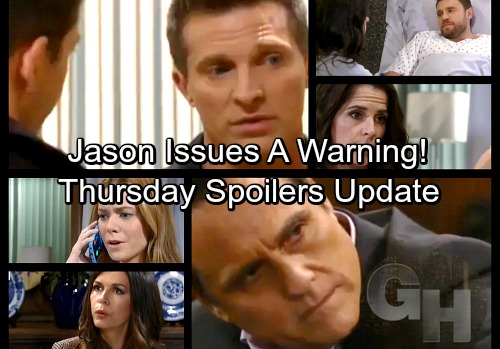 General Hospital (GH) spoilers for Thursday, March 8, tease that Nelle (Chloe Lanier) will get a stunning phone call. When the person on the other end shares big news, Nelle will stammer that it’s not possible. She’ll suggest it just can’t be true.

Perhaps it’ll be Nelle’s new landlord notifying her of the damage. Her apartment building may have been destroyed in that doozy of an earthquake. Luckily, Nelle’s got Quartermaine connections now. She’s having Michael’s (Chad Duell) baby and that’s allowed her to form a friendship with Monica (Leslie Charleson).

After Monica hears about Nelle’s dilemma, she’ll undoubtedly make a generous offer. Nelle will be moving in the Quartermaine mansion before you know it. Meanwhile, Anna (Finola Hughes) and Andre (Anthony Montgomery) will stop at a restaurant. They’re off on a trip to get answers about Anna’s child, but big surprises await.

For starters, a woman will appear at their table with information for Anna. General Hospital spoilers say Anna will make great strides in her search. Sadly, she doesn’t have her facts straight. It won’t be long until this wild goose chase comes to an end. There’s no point in looking all over for a daughter when Anna’s son is back in Port Charles.

Since Anna actually gave birth to a boy, it seems likely that it was Heinrik. Of course, GH fans know Heinrik has been living in PC as Peter August (Wes Ramsey). General Hospital spoilers say Peter will reach out to Maxie (Kirsten Storms) again on Thursday. He knows she’s had to deal with a lot lately, so he’ll want her to know she’s not alone.

Maxie will still be terrified about her baby’s potential diagnosis. She obviously won’t care that Faison suffered, but she’ll hate the idea of her kid facing Huntington’s disease. Peter will have some concerns of his own, but he’ll put those aside to help Maxie. He might urge her to keep her fears under control until she gets answers.

At GH, Sam (Kelly Monaco) will stay right by Drew’s (Billy Miller) side. She’ll be relieved that he survived the latest disaster. Drew will be happy to see Sam in one piece, too. They’ll come together for some sweet moments, but Sam will also have Jason (Steve Burton) on her mind. She’ll be careful to avoid spilling too much as she describes how Jason saved her.

Drew will probably be jealous, but grateful. That’s about the best we can hope for. Since Sam is clearly still in love with Jason, no one can blame Drew for being a bit insecure. Fortunately, Sam loves Drew as well. That could keep their relationship alive when things get tough.

Nearby, Jason will encourage Michael to trust his mom’s instincts. He’ll think Carly (Laura Wright) knows what she’s talking about when it comes to Nelle. Across town, Carly will give Sonny (Maurice Benard) the nudge he needs. She’ll think they should talk about how to handle Mike’s (Max Gail) Alzheimer’s.

It sounds like they’ll have to sit Mike down and discuss what’s next. We’ll give you updates as other GH details emerge. Stay tuned to the ABC soap and don’t forget to check CDL often for the latest General Hospital spoilers, updates and news.