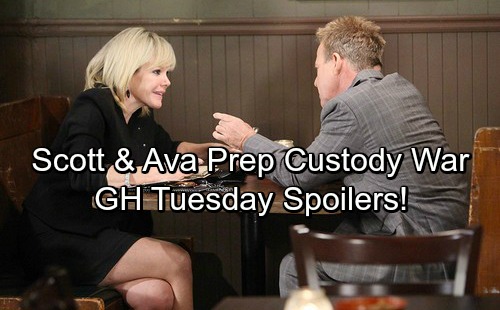 General Hospital (GH) spoilers for Tuesday, April 24, tease that Ava (Maura West) will have an important meeting with Scott (Kin Shriner). She’s tired of letting Sonny (Maurice Benard) and Carly (Laura Wright) control how much time she gets with her daughter. Avery (Ava and Grace Scarola) means the world to Ava, so she intends to fight for her.

Scott will weigh in on Ava’s chances in court. The kidnapping situation Mike (Max Gail) could work in Ava’s favor. If she can prove she’s the better parenting choice, Ava’s dreams could come true. Meanwhile, Nelle (Chloe Lanier) will do her best to build on the progress she’s made. She’ll hope she can be the one Michael (Chad Duell) leans on throughout all this.

Poor Mike will feel horrible about the trouble he’s caused. He never meant to spark panic or bring on a custody battle. Dante (Dominic Zamprogna) and Sonny will try to be there for Mike during this difficult time. They may run into some problems thanks to Mike’s dementia. He gets frustrated when he gets confused and that can lead to some tough outbursts.

Carly will also sit down for an appointment with Kevin (Jon Lindstrom) on Tuesday. She’ll open up about some of the crazy stuff she’s been dealing with. Carly will hope for good news, but Kevin may not be able to give her that. When he hears her wild recap, Kevin may be just as concerned as Griffin (Matt Cohen). Nelle’s plan to make Carly seem nuts is going well so far!

Other General Hospital spoilers say Kiki (Haley Erin) will face more Dr. Bensch (James DePaiva) drama. He’ll continue to make life miserable for her at GH, so expect some tense scenes. Over with Curtis (Donnell Turner), he’ll have a surprise for Jordan (Vinessa Antoine). General Hospital spoilers say Curtis is cooking up a proposal soon, so this could be the big day.

It sounds like things will be buzzing around Port Charles. Which storylines are you loving the most right now? We’ll give you updates as other GH details emerge. Stay tuned to the ABC soap and don’t forget to check CDL often for the latest General Hospital spoilers, updates and news.