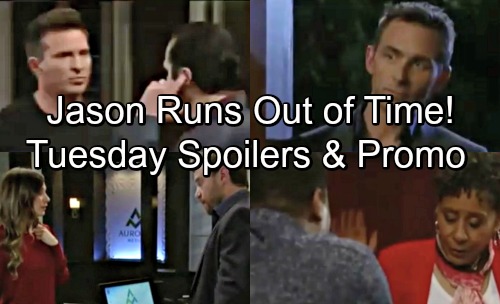 General Hospital (GH) spoilers for Tuesday, June 5, tease that Lulu (Emme Rylan) will get some shocking news. Dante (Dominic Zamprogna) will drop some hints about big changes at the PCPD. He’ll let Lulu know that Jordan’s (Vinessa Antoine) head could be on the chopping block. Perhaps all the drama surrounding Peter’s (Wes Ramsey) escape was just too much to ignore.

Meanwhile, Jordan and Curtis (Donnell Turner) will have a night out at The Floating Rib. After they spot Stella (Vernee Watson), Curtis may wonder if Jordan wants to leave. Stella obviously wasn’t happy about their engagement, so Curtis might think they should avoid making things worse right now.

However, Jordan will suggest that they have to tackle this head-on. They’ll probably share a tense conversation with Stella, but it’s doubtful they’ll make any progress. General Hospital spoilers say Stella will also have a chat with Felix (Marc Anthony Samuel). When he brings up Curtis’ recent proposal, Stella will throw her hands in the air and insist that she doesn’t want to talk about it.

Of course, Felix can be pushy when he believes it’ll help the situation. He may urge Stella to give Jordan a chance. She’s going to be in Curtis’ life whether Stella likes it or not, so keeping the peace would be for the best. At Aurora, GH spoilers say Drew (Billy Miller) will get a visit from Kim (Tamara Braun). He may open up about his conflicted feelings regarding the memory procedure.

Drew was all set to move forward with the danger, but talking to Oscar (Garren Stitt) may have left him with concerns. Does Drew really want to miss out on Oscar’s school events and the internship he’s applying for? Oscar wants to be working under Drew’s wing, but that can’t happen if his father dies on the table.

In Tuesday’s preview video, Kim says she knows Drew wanted something and he needs it now more than ever. Is she talking about the procedure to regain his memories or Drew’s new bond with his son? Kim was previously against the procedure, but her opinion could start to shift. Bottom line, this is Drew’s choice to make and he has to decide if it’s worth it.

Across town, Sam (Kelly Monaco) will get some irritating updates. She’ll realize Alexis (Nancy Lee Grahn) is helping out Valentin (James Patrick Stuart), so he’ll be helping Alexis out in return. Sam will be wary of any connection between these two. She knows that when Valentin’s involved, it only leads to trouble.

Elsewhere, Jason (Steve Burton) will grow frustrated. He’ll tell Sonny (Maurice Benard) that he needs more time to prove Nelle (Chloe Lanier) set Carly (Laura Wright) up. Unfortunately, it seems Jason won’t be able to clear his bestie’s name before her next court date. Carly’s fate is out of his control.