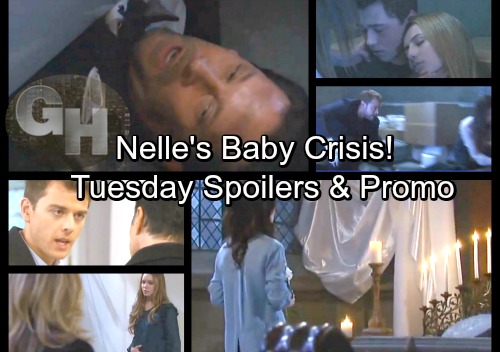 General Hospital (GH) spoilers for Tuesday, March 6, tease that Jason (Steve Burton) and Sam (Kelly Monaco) will try to help Mike (Max Gail). Franco (Roger Howarth) sent Mike to get some help, but memory issues are currently preventing the rescue. Mike can’t remember what he was supposed to be doing, but Sam and Jason will manage to get a few details out of him.

Jason will realize someone’s trapped, so he’ll just need to know who and where. Mike won’t be able to tell Jason the victim’s name, but he’ll eventually recall the area. General Hospital spoilers say Jason and Sam will rush over to the site of the damage. A tricky dilemma is coming up since Franco’s the one who’s stuck. Jason will have to free his worst enemy, so stay tuned for the tense scenes ahead.

Meanwhile, Liz (Rebecca Herbst) will worry at the church. She’ll be concerned about Franco’s fate, but she’ll still feel a sense of inner peace. Liz will believe Franco’s doing everything he can to get back to her.

Other General Hospital spoilers say Michael (Chad Duell) and Sonny (Maurice Benard) will spar at GH. Sonny will insist that Michael needs to get his head checked out and rest. He won’t want Michael to overdo it when he most likely has a concussion.

Michael will shut down the idea of sitting still right now. He’ll snap that he needs to find out about Nelle (Chloe Lanier) and the baby. At the gallery, Nelle and Carly (Laura Wright) will continue to clash. They’ll both be ready to get out of there, but the situation will quickly turn from unpleasant to alarming.

Nelle will suddenly feel a sharp burst of pain. She’ll believe she’s having a contraction. Carly won’t seem convinced at first, so she might urge Nelle to stop playing this up for sympathy. As Nelle’s pain gets more severe, Carly may determine that this crisis is real. She should see a different side of Nelle as fear takes control.

Elsewhere, Drew (Billy Miller) and Kim (Tamara Braun) will finally get the freezer door off its hinges. They’ll rush to Josslyn (Eden McCoy) and Oscar (Garren Stitt), but the unconscious teens will be fading fast. Kim and Drew will be desperate to save them, so some scary moments are looming.

At home, Ava (Maura West) will enjoy some peace and quiet with Avery (Ava and Grace Scarola). The earthquake left Ava with plenty of anxiety, but a night with Avery should ease her mind. She’ll undoubtedly hug her daughter a little tighter after this life-threatening ordeal.

It looks like a great episode’s on the way. We’ll give you updates as other GH news comes in. Stick with the ABC soap and don’t forget to check CDL often for the latest General Hospital spoilers, updates and news.