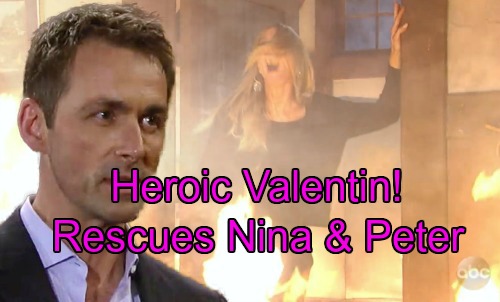 General Hospital (GH) spoilers tease that more obstacles are headed Liesl’s (Kathleen Gati) way. She’ll face another big one by the end of the week, so let’s consider what that might be. Thanks to GH’s latest promo, we know Dr. O will set the Wyndemere stables on fire. Nina (Michelle Stafford) will be desperate to stop her partner in crime, but her efforts won’t pay off.

Liesl will feel like this is the only way to solve their Peter (Wes Ramsey) problem. Nina would’ve preferred a less fiery solution, but she’ll have to deal with the situation she’s given. Unfortunately, that won’t be an easy task.

Liesl will probably just set the blaze and run. She won’t want to be around when firefighters, cops or anyone else comes to investigate. Liesl may assume Nina’s right behind her, but the caring blonde can’t just walk away. Nina’s got a good heart, so she won’t want to leave Peter in there. She knows Maxie (Kirsten Storms) would be livid if she allowed Peter to die.

General Hospital spoilers say Nina will try to save Peter from a scorching fate. However, that will put her in harm’s way as well. The fire will spread rapidly, so it won’t be long until the building starts to collapse around them.

Finn (Michael Easton), Franco (Roger Howarth), Sam (Kelly Monaco) and Curtis (Donnell Turner) have all been hot on the trail, but these characters don’t make sense as rescuers. It’d be better for GH to pick someone who cares about both Nina and Peter. It’d also be great if it was somebody who could use a little redemption.

Does that sound like anyone to you? This could be Valentin’s (James Patrick Stuart) big chance! He’s also putting the whole story together, so he may show up at the stables in the nick of time. If Valentin saves Peter and Nina from the flames, he could earn at least a few points. Nina may not be ready for forgiveness just yet, but this could be a huge step toward it.

As for Obrecht, she could encounter trouble on her way off the island. Any of the other sleuths we mentioned could stop Dr. O in her tracks. General Hospital spoilers say the drama’s about to heat up, so stay tuned. We’ll give you updates as other GH news comes in. Stick with the ABC soap and don’t forget to check CDL often for the latest General Hospital spoilers, updates and news.