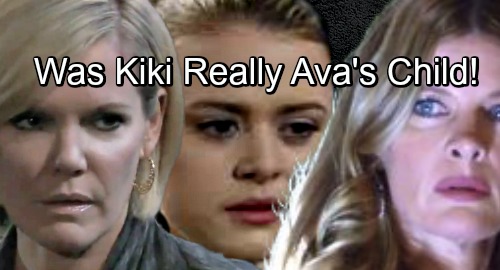 General Hospital (GH) spoilers tease that more mysteries will play out in Port Charles. Of course, a big one will involve getting to the bottom of Nina’s (Michelle Stafford) daughter situation. Sasha (Sofia Mattsson) isn’t really Nina’s biological child, so it seems Nina’s still got one out there. Unless, of course, the missing daughter is already dead and gone!

That could be the case if GH ultimately reveals Kiki as Nina’s kid. Let’s consider what that story might look like. It’d be a bummer for Nina to never know the truth until it was too late, but that’d also bring great drama. Nina wouldn’t get a chance to bond with Kiki as her daughter, so we’d see plenty of conflict, anger and sorrow.

After Ava (Maura West) turned against Kiki, Nina was quick to pipe up. She suggested that if Kiki were her daughter, she wouldn’t be wasting time like Ava. Perhaps that was a clue about Nina and Kiki’s connection. General Hospital has also been building up this major feud between Ava and Nina. They’ve gone head to head several times, including recently over Sasha getting roofied.

GH may have a reason for revving up the hostility. They could be laying the groundwork for Ava’s lies to be exposed. If Ava’s been deceiving everyone about Kiki all this time, it could mean Nina was Kiki’s real mom. Obviously, Nina could go off in a big way if that’s true and she finds out.

General Hospital has also dropped some hints about Nina’s mental health. She’s mentioned her previous issues on multiple occasions. GH could easily be setting the stage for a major relapse. What could prompt a setback like that? Learning the real story behind Sasha doesn’t seem like enough.

After all, Nina would just want to revive the search. She’d simply lash out at Valentin (James Patrick Stuart) and focus on finding her real daughter, right? There’d be no need to lose her mind over it when she still had hope.

However, having her dream reunion shattered could certainly drive Nina over the edge. It’s easy to imagine Nina losing it if she finds out her biological child is dead. If GH is going with that angle, they might as well make Kiki Nina’s kid. Could police DNA testing reveal some unexpected connection?