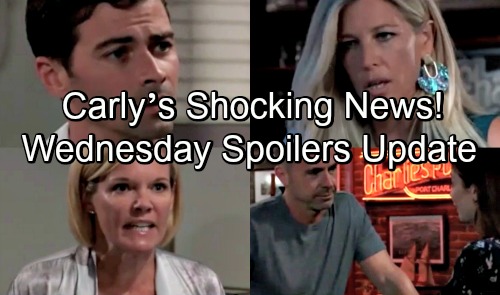 General Hospital (GH) spoilers update for Wednesday, August 15, tease that Kiki (Hayley Erin) will have a heartbreaking confrontation with her mom. She’ll express regret for having sex with Griffin (Matt Cohen) after the Nurses Ball, but that won’t curb Ava’s rage. When Ava feels pain, it comes out in the form of outbursts and plots for vengeance. She’d rather focus on anger the dwell on sadness.

Ava will push Kiki to tell her what hooking up with Griffin was like. Naturally, Kiki won’t answer that question. She’ll try to smooth things over instead, but she’ll know it’s futile deep down. Ava might forgive Kiki someday, but it’s definitely not going to be this one. At GH, Griffin will be summoned to Monica’s (Leslie Charleson) office. He’ll get some tough updates on his status at General Hospital.

Ava warned Griffin that he would pay, so he really shouldn’t be surprised by the paternity test exposure. That test was illegal, which means Griffin will be suspended from all his usual duties. There’ll undoubtedly be an investigation to determine if Griffin will be reinstated. He’ll quickly accept his fate since he deserves it!

Elsewhere, Alexis (Nancy Lee Grahn) will fret over Kiki’s latest drama. She’ll tell Molly (Haley Pullos) and Sam (Kelly Monaco) that justice is coming at a price. Kiki’s secret was revealed thanks to the court battle, so that’s tainted her win a bit. Although Kiki’s happy about putting Dr. Bensch (James DePaiva) in his place, she’ll still face some rough family issues in the coming weeks.

Nevertheless, Alexis will put her fears for Kiki aside and focus on her own daughters. It appears Kristina (Lexi Ainsworth) will join the gathering soon. She’ll probably just have to make a stop at Sonny’s (Maurice Benard) house beforehand. Sonny will greet Kristina and assure her that she’s needed in town. He’ll be glad Kristina can offer Michael (Chad Duell) support and be there for her mom as well.

Other General Hospital spoilers say Carly (Laura Wright) will be a little confused. Liz (Rebecca Herbst) will show up with news about Cameron’s (William Lipton) shoplifting adventure. She may hint Cam’s rebellious streak could rub off on Josslyn (Eden McCoy).

Of course, Joss told Oscar (Garren Stitt) that she was the bad influence. She was stealing while Carly was locked up, so it’s not like she’s completely innocent. Carly will wonder if her daughter’s guilty of theft, but Liz may suggest she doesn’t know anything for certain. She might just argue that they have to look out for each other as moms. It’s best to be aware of what their teens are up to.

Carly will want to have a conversation with Josslyn and get to the bottom of this ASAP. Joss will inevitably get defensive, but she might break down and come clean sooner or later. Carly can usually sniff out the truth anyway!

Over with Julian (William deVry), he’ll object to Kim’s (Tamara Braun) move. It seems she’ll block him from taking a dark turn, but Julian may get irritated about it. However, Kim will feel like she’s just helping Julian keep his word. He promised that his days as a criminal were behind him, so Kim’s counting on Julian to be the good person she knows he can be.