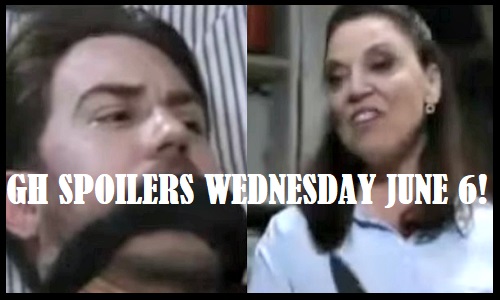 General Hospital (GH) spoilers for Wednesday, June 6, tease that Liesl (Kathleen Gati) will want Peter (Wes Ramsey) to suffer. GH fans know she was behind his kidnapping and now Nina’s (Michelle Stafford) her partner in crime. They’re hoping that they can get a full confession out of Peter if they break his will to live.

Of course, that means Dr. O will have to torture Peter a bit! On Tuesday’s episode, Liesl will grip a huge knife and suggest that they have an eventful morning planned. Peter will remain gagged as he gazes at the weapon. He’ll be as nervous as ever, which will be just fine with Liesl. After everything that went down with Nathan (Ryan Paevey), Dr. Obrecht will be happy to prey on Peter fears.

Meanwhile, Anna (Finola Hughes) will arrive to see Robin (Kimberly McCullough). Although Robin has heard a few hints, she has no idea that Peter is her half-brother. General Hospital spoilers say Anna will try to explain as gently as possible. She’ll want to preserve the trust Robin has in her, but it won’t be easy.

Robin will lash out after Anna drops her latest bomb. She’ll feel deceived as she struggles to wrap her head around all this. Thankfully, Finn (Michael Easton) will be waiting to offer plenty of support. Since Robin is going to need some space, Finn won’t want Anna to feel alone.

Other General Hospital spoilers say Nina will stop by Alexis’ (Nancy Lee Grahn) place. It’s clear that Alexis has been one busy lawyer lately! Nina will push Alexis to handle her divorce from Valentin (James Patrick Stuart). She’ll insist that there’s no hope for her marriage, so she’ll want out ASAP.

At GH, Julian (William deVry) will catch up with Kim (Tamara Braun). He’ll suspect she’s been avoiding him because he went chasing after Alexis. Kim might argue that’s not the case, but she was surely a little hurt deep down.

However, Kim’s also been chasing after Drew (Billy Miller) in a way. She’s been completely focused on stopping his memory procedure, so she hasn’t had much time for “Charlie.” Kim and Julian may try to renew their bond on Tuesday, but they can’t change the fact that they love other people. This love saga is only going to get more complicated in the weeks ahead. 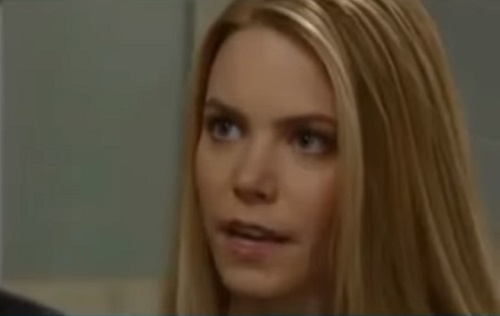 Nearby, Nelle (Chloe Lanier) will deliver some important news. She’ll tell Michael (Chad Duell) that she’s been subpoenaed to testify against Carly (Laura Wright). Michael will hate the thought of Nelle spewing lies on the stand, but he’ll have to keep up his ruse. Nelle’s getting played, so Michael will want to stay committed and bring her down as soon as possible.

Across town, Diane (Carolyn Hennesy) will have some updates for Carly. She may admit they could hit some big snags in the courtroom. Carly will wonder whose testimony they’re worried about and it’s probably not Nelle’s. After all, Nelle would love for Carly to look insane. That’s been her goal for a while now.

Based on Diane’s recent chat with Jason (Steve Burton), he could be the real problem here. Jason is willing to testify about Carly’s unexplained incidents and leave out his speculation. Unfortunately, he refuses to lie about Carly being crazy. That could hurt Carly’s chances if she can’t change his mind.