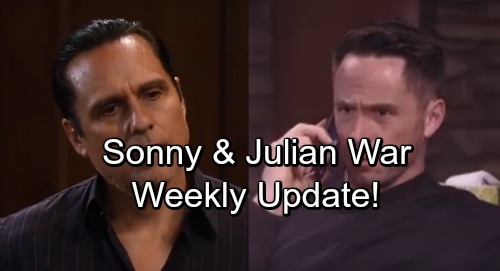 General Hospital (GH) spoilers tease that Julian’s (William deVry) anger will erupt. He’ll have an enemy on his mind and he just won’t be able to contain his rage anymore. Sonny (Maurice Benard) and Julian’s feud will reignite soon enough. It’s clear that these two have a major battle brewing.

GH fans can expect the trouble to start in the week ahead, January 8-12. It looks like Sonny’s move will spark some outrage. He’ll become territorial and fight for what he wants. Perhaps this will have something to do with the Charles Street development. Business is business for Sonny, so he probably wouldn’t have an issue with the development if it benefited him.

Of course, Michael (Chad Duell) isn’t too keen on this project. He sees the value in the preservation of Port Charles, but that doesn’t mean Sonny has to agree with him. As for Julian, he knows that Alexis (Nancy Lee Grahn) wants to save Charles Street for Molly’s (Haley Pullos) sake. Julian has his own business in mind as well. He just bought a pub, so he values his customers.

Some General Hospital viewers have suggested that Sonny might be the mysterious landlord who’s shutting off Molly and TJ’s (Tequan Richmond) power. That seems a little extreme, but you never know when GH might throw in something illogical for the sake of a twist. Sometimes the writers feel the surprise is worth it. Sonny could always be wrongfully accused instead.

It’s also possible that Sonny will simply have a deal in the works. He might make a purchase that could hurt Julian’s profits in some way. A competitor could really put a dent in how much Julian makes. Whatever the case, Julian won’t be happy. He’ll eventually decide to confront Sonny, so an explosive argument’s coming up.

The week of January 15-19 will deliver some serious drama. General Hospital spoilers say Julian will get in Sonny’s face and mouth off. He’ll have a big problem with the sneaky Corinthos’ tactics.

Other matters could come into play during this conversation, too. Julian might take the opportunity to stand up for Ava (Maura West). Sonny still won’t let Ava have much time with Avery (Ava and Grace Scarola), so Julian could take him to task for that.

Julian may want to watch his back after this. Sonny doesn’t like it when people get in his way or try to stop what he has in motion. Julian is playing with fire, but Sonny’s also taking risks. This war could get ugly! We’ll give you updates as more GH news comes in. Stick with the ABC soap and don’t forget to check CDL often for the latest General Hospital spoilers, updates and news.