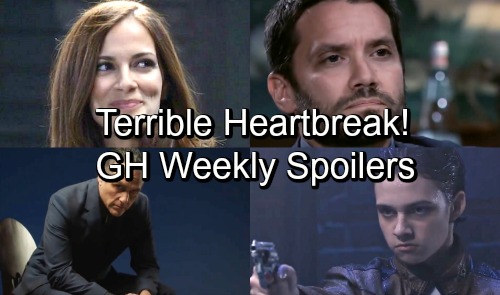 General Hospital (GH) spoilers for the November 12-16 tease that some shocking scenarios are ahead. For starters, let’s talk about a very special episode of the ABC soap. GH will deliver an intriguing look into Sonny’s (Maurice Benard) past as well as a glimpse of what might’ve been. To honor Benard’s 25th anniversary with the show, they’ll explore a different life for Sonny and ask “What If?”

Benard’s son, Joshua Benard, will play the younger version of Sonny in some upcoming scenes. Dominic Zamprogna will also be back as Dante, so this sounds like a real treat for General Hospital fans. In this alternate reality, Sonny will steer clear of violence and crime. He’ll take a better path, but perhaps the grass isn’t always greener on the other side.

Of course, we’ll also see all the usual storylines on this week’s new GH episodes, November 12-18. GH spoilers say Anna’s (Finola Hughes) patience will be running thin. It seems Britt (Kelly Thiebaud) may become more trouble than she’s worth! Over with Jordan (Briana Nicole Henry) and Curtis (Donnell Turner), they’ll do some last-minute wedding prep. Their nuptials are rapidly approaching, so they need to focus and get their act together.

Other General Hospital spoilers say Liz (Rebecca Herbst) will be at the end of her rope. She may face some teen troubles with Cameron (William Lipton) or perhaps more Aiden (Jason David) drama. Franco (Roger Howarth) will seek out Scott (Kin Shriner) for advice, so let’s hope he gets what he needs.

Later, Liz will battle some sorrow and work to help her son. She’ll step up for Aiden when he needs her most, but her plan won’t be easy. Meanwhile, Drew (Billy Miller) will do something nice for Curtis. This concerned dad has been busy dealing with Oscar (Garren Stitt), but he’ll still make time for his buddy. Drew will just want Curtis to know he cares, so his surprise should touch his pal’s heart.

Elsewhere, Sasha (Sofia Mattsson) will have an interesting meeting. Laura (Genie Francis) will receive an introduction and give one in return. Where’s GH going with this? There must be a reason for these two to cross paths, so some mysteries should unravel along the way.

General Hospital viewers will also see Sasha go to war with Kiki (Hayley Erin). Accusations will hurl and warnings will be delivered, so these “sisters” may not be bonding anymore. Sibling rivalry could come out in full force thanks to Griffin (Matt Cohen)!

Finally, Hayden (Rebecca Budig) will get a message to Finn (Michael Easton). Will he get any hints about his kid or what Hayden’s been up to? Finn will have a lot on his mind soon enough. We’ll give you updates as other GH news comes in. Stay tuned to the ABC soap and don’t forget to check CDL often for the latest General Hospital spoilers, updates and news.