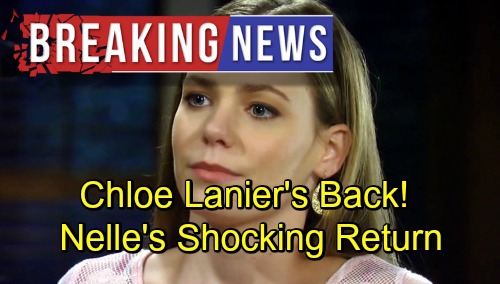 General Hospital (GH) spoilers tease that the ABC soap has a huge return in store. Chloe Lanier left the role of Nelle in August, but she’ll be back for additional scenes soon enough. Word has it Lanier will make a brief appearance next week, October 8-12, so that’s great news.

Of course, GH fans know Nelle’s still stuck behind bars. She recently sent Michael (Chad Duell) a letter, but that’s been her only contact with the outside world since her exit. Fortunately, that’s about to change. Nelle will apparently get a visitor, but who will it be? People aren’t exactly clamoring to see the schemer, who stabbed nearly every Port Charles resident she met in the back.

However, there’s one person who could probably stand to chat with Nelle. It also lines up with a hint that’s floating around out there. General Hospital spoilers suggest that Nelle may get a chance to see her baby during this short sting. With that in mind, it sounds like Brad will pop in with “Wiley” aka Jonah. It’s only fair since Nelle made Brad and Lucas’ (Ryan Carnes) family possible.

It’s a bit risky to bring Nelle’s son around her, but Brad may hope he can use the kid to his advantage. He might want Nelle to see that “Wiley’s” doing well with his caring parents. Brad’s undoubtedly worried about Nelle sending Michael more letters and dropping extra hints. She may even summon him with a veiled threat, which would be a good reason for Brad to make a Pentonville trip.

Whatever the case, it should be fun to see Nelle again. She’ll undoubtedly be included in this story as it moves forward. It’s too early to reveal the baby swap, so Nelle will be needed at a later date. She has to be around for at least part of the shocking fallout!

Luckily, Lanier has been open about her desire to make this a recurring role. She loves bringing twisted Nelle to life, so GH viewers will hopefully be seeing more of her here and there. Are you excited about Nelle’s next stint? We’ll give you updates as other General Hospital details emerge. Stick with ABC’s GH and don’t forget to check CDL often for the latest General Hospital spoilers, updates and news.