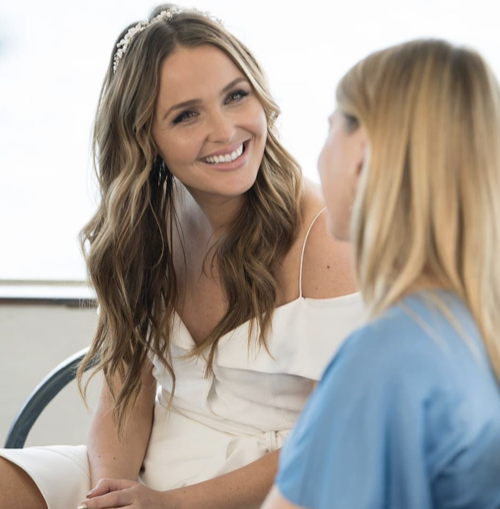 Tonight on ABC their hit drama Grey’s Anatomy returns with all-new Thursday, May 17, 2018, season 14 episode 24 and we have your Grey’s Anatomy recap below. On tonight’s Grey’s Anatomy season 14 episode 24 called “All of Me” as per the ABC synopsis, “The Season 14 finale. Meredith Grey and the team of doctors at Grey Sloan Memorial are faced with life-or-death decisions on a daily basis. They seek comfort from one another, and, at times, more than just friendship. Together they discover that neither medicine nor relationships can be defined in black and white.”

April had put together a beautiful wedding for Jo and Alex on tonight’s all-new episode of “Grey’s Anatomy Recap”.

April had planned everything for them. She had even brought in an additional wedding planner to make sure the wedding was perfect and so what she hadn’t planned on was the jinx. The happy couple jinxed their own wedding. They saw each other before they got married because Jo found out she got her dream fellowship and had wanted to celebrate with her soon-to-be husband and she had been right to go to Alex. Alex had promised to follow her wherever she went for her fellowship and so he needed to know that if he was serious about it that she was leaning towards going to Boston. Boston was on the other side of the country and the mere idea of moving there hadn’t bothered Alex in the least.

Alex had no problem with packing up his things and go with Jo to Boston. Alex’s best friend, on the other hand, hadn’t wanted to lose Alex. Alex and Meredith have always had each other when something goes wrong or when their dreams came true, so Meredith hadn’t wanted to lose Alex. She later talked to him about how cold it was in Boston and how neither of them would know anyone there and still she didn’t get what she wanted. She didn’t get Alex to change his mind about following his wife and so she went to the wedding upset. Meredith had arrived with Alex to the ceremony because they had been running a little late and unfortunately so everyone else was late as well.

Most of the guests had used the GPS link on the wedding website and that link led them to the wrong wedding. They went to the wedding of Lila and Jacob and didn’t realize until they saw the bride coming down the aisle and knew she was the wrong race for their Jo. The guests that were at the wrong wedding had tried to leave as discreetly as possible and so most of them made it out of the door when the Mother of the Bride collapsed. Luckily, Bailey hadn’t made it to the door and was able to ride with the poor woman back to the hospital where she realized there was nothing there good enough to keep the woman alive. This wouldn’t have been a problem if the truly great doctors hadn’t gone to the wedding and so Bailey tried to make do.

Bailey was planning on using the backups to help keep this mother alive when she ran into an old face returned to the hospital. Teddy was back in town and Bailey was the first person she recognized, but Bailey had been so happy to see her that she roped Teddy into surgery. She told Teddy that their patient couldn’t die on her daughter’s wedding and so they went to work on the woman while Ben helped the bridal party. The bridal party was all a wreck since the MOB passed out and the bride was deep in tissues because her supposedly happy day had taken the turn for the worst. And so there were at least two people that were going to be missing out on Jo and Alex’s wedding, not to mention the happy couple also happened to run into more bad luck.

Meredith had decided to ask Jo to stay on as an attendee because she had been so afraid of losing Alex that she was willing to push Jo into turning down her dream fellowship and so Jo figured out what was going on. She knew that Meredith had offered her a job in order to make her stay and she accidentally thought Meredith did that because Alex asked her to. Jo thought Alex was trying to manipulate her with Meredith and had gone to confront him, only she realized a few minutes into laying it him that Alex could never have done that. He wasn’t like Paul! Alex would just tell her if he didn’t want to move and so the two eventually made up. They had found a little shack near the venue and had made up in there. They were also going to hurry back to the wedding afterward and that part couldn’t happen because the door jammed.

They had gotten locked in the shack and had tried calling for help. Only the guests couldn’t hear them over the wedding music and the music would have gone on forever if the wedding planner hadn’t had to make an announcement. She told everyone that the wedding officiant was still a few minutes out and she had handed over the mike to DeLuca because she thought he could give a wedding toast. He actually went on about how important it was to hold those you love close or you risked never-ending pain. It was a sucky toast and Meredith had taken him for a walk in the hopes that it would sober him up. And so while DeLuca was getting cheered up and then humiliated he kissed Meredith, the two heard Alex and Jo.

The couple had been shouting for the longest time and they had even found a body in the shack that seemed to have been there for years. The happy however had decided to wait to call someone to report the body because they hadn’t wanted to prolong their wedding and so they went back to the reception area where they found half their wedding party cutting into the wedding planner. The planner had accidentally eaten shrimp which she was allergic to and no one had an EpiPen on hand. They instead tried to cram a Benadryl up her butt and was forced to cut her throat when she lost consciousness. If it wasn’t one thing then it was another! The wedding was ruined and both couples thought they weren’t going to be getting married that day.

They were actually heading back to Seattle on the ferry when they found out they spoke too soon. They found a website that allowed someone to become ordained online and so Meredith later performed their marriage ceremony right there on the ferry. She even threw in a joke about how she hated ferry rides until this one and meanwhile back at the reception something both beautiful happened. Matthew had proposed to April again and they decided to get married when the wedding officiant finally showed up. It had been a small wedding that was intimate and nothing like what they had planned before yet it had fit who they were now. Therefore, it didn’t matter that April had was also leaving the hospital. She left to devote her life to god and treating the homeless.

She found a new path for herself and Arizona left town knowing her best friend would be okay. But Teddy being back wasn’t a coincidence. She asked Bailey for a job because she was moving back for a very important reason. Teddy was pregnant and so it’s a good thing Bailey decided to make her interim chief while she takes a sabbatical because Teddy’s pregnancy news may have come at the worst time for Owen…