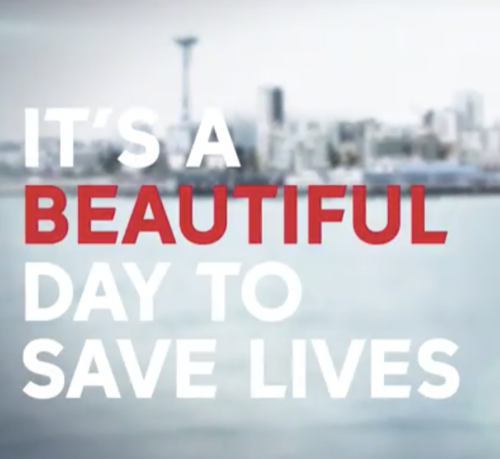 Grey’s Anatomy begins tonight with Richard (James Pickens Jr.) getting a message from his wife, Catherine (Debbie Allen) saying she is staying in LA for another night as the Foundation needs her. Jackson (Jesse Williams) and Maggie (Kelly McCreary) are enjoying their time in bed when they both throw their phones to avoid real life. Meanwhile, the Harper Avery Medical Center sign is removed while the Catherine Fox Medical Center sign replaces it.

Both Meredith (Ellen Pompeo) and Tom (Greg Germann) are surprised to learn Catherine sent for them for a VIP consult. Meredith doesn’t find him funny when he mocks her nervousness over flying; both wonder why Meredith requested them, as they prepare for taking off, Meredith asks Tom to keep talking.

At the hospital, Richard is still called “Chief” as they banter, nurse Frankie keels over in pain. Richard does an ultrasound and Ginger (Patricia Bethune) rushes in wanting to know what they are thinking. Frankie explains this isn’t how she planned her life, but she has a village behind her. Richard reassures her that he has never a challenge she couldn’t rise to. He finds a wandering spleen, which is cutting off the blood supply and wants to book an OR; she is unwilling to risk the surgery explaining this baby is “all her eggs in one basket” after 3 rounds of IVF and a miscarriage. They promise to watch Frankie like a hawk.

Catherine greets Tom and Meredith, giving them all the information about their patient. After showing all the test results and the size of the tumor and position, Catherine reveals she is the patient. She doesn’t want to hear any apologies; she just wants a biopsy as soon as possible saying Jackson and Richard will only know about it when there is something to know.

Frankie insists the nurses get back to work when Richard returns. He closes the curtain when Ginger won’t leave the room. He tells her she is the boss he always knew she would be. During the ultrasound, they see the spleen is beginning to untwist and she was right. Frankie asks about everyone in Richard’s family and knows how hard it was for him to lose Ollie. He opens the curtain and Ginger tells him if he keeps up the good work, their girl might just name the baby after him, handing him a cupcake.

Maggie and Jackson talk while he is taking a shower and she finds his phone with a message, “Miss you, Kate.” with several hearts behind it. Maggie demands the truth and Jackson admits he met someone while at the Monastery. He’s never slept with her and never wanted anything to happen, she simply was someone who understood what happened. He gives Maggie his phone to read all the messages, saying it is nice to talk to people who have been through the same thing. Maggie learns that he is also talking to April.

Richard runs back to Frankie’s room when her blood pressure tanked and her pain level is through the room, there is blood in her abdomen. Richard tells them to call OB stat and page Alex Karev (Justin Chambers) because they need to take the baby out now and they need the best on hand.

Meredith and Tom perform the biopsy on Catherine while Richard works on Frankie. Alex arrives and says they have to get the baby out; he feels Richard’s judgment might be clouded when it comes to this patient, but he says he owes it to her to do everything in his power to keep the baby in where he belongs. There is too much internal bleeding and Alex removes the baby, who is now in distress, even though there are horrible risks as the baby is only 28 weeks gestation.

Alex takes the tiny baby out, stating intubation immediately. He finds an airway and has movement, saying the baby is good. Richard needs a crash cart, telling Frankie to come back as her son is okay. They use the paddles, determined to bring her back.

Maggie felt it would be her to destroy her and Jackson’s relationship; which surprised Jackson since he never pictured them ending. She is furious he is texting a woman he used to sleep with and another who clearly wants to sleep with him – things he doesn’t tell her. He says he doesn’t tell her these things because she won’t talk to him. She denies that because she supports him, but he says she doesn’t talk; she doesn’t share. He reveals that every time something gets complicated, she runs and even plans the end of a relationship before it even begins. He admits he finds it easier to open up to people who also open up to him.

Tom sits at Catherine’s bedside, together they are singing when Meredith comes in; revealing its something they used to do. Meredith wants to call Richard, but Catherine says she thinks she needs a real drink first.

Back in the OR, Dr. Webber is unable to call time of death, leaving Dr. Karev to do it. Richard is left to inform all the nurses; Ginger gives him a huge hug and sobs with the rest of the group. Later that night, Richard goes to an AA meeting, where he is welcomed back. As someone talks, all Richard can here is the flatline of the machine in the OR and leaves the meeting.

Catherine takes Tom and Meredith to the bar, telling them tiptoeing around the possible diagnosis is not going to change her situation. She chastises them, saying there is nothing they could say that is worse than everything she is imagining right now. Meredith and Tom bite the bullet and explains the two kinds of cancer she might have and her options. Tom is uncomfortable and leaves for the bathroom. Catherine talks to Meredith about Richard, worried that he can’t handle this. Meredith says this is not her choice to make, as this is his life too. Tom returns saying the lab has the results.

Maggie tells Jackson a part of her was relieved when Jackson left because when he came back he would be himself but instead he came back with more questions and turned to other women. She was always the person who was 5 steps ahead of everyone else, never learning how to fight nor love without it being the end of the world and Jackson has been married and divorced. He is 5 steps ahead of her in this case, and she doesn’t know how to catch up. She wants him to explain what he has lost, and he is willing to try to explain how messy it was. He is on the same page as forApril when it comes to God, but he is now grieving for what they both lose and what their daughter lost. He really loves Maggie, its all true but messy. Maggie gets up with tears in her eyes and says she can’t, walking out of the door.

Richard arrives at the bar that has the sign “Chips for Shots”, he walks up to the bar handing him his 8 year sobriety chip and tells the bartender his choice of poison is Vodka. Richard watches him pour the 8 shot glasses and tells him to enjoy them. Richard takes his chip back and grabs a baseball bat and starts smashing up the entire bar. The bartender shouts for someone to call the police, Richard wishes he would so he can tell them what he is doing to people, who are trying to do right by their families. Giving drinks to people in exchange for their sobriety.

Catherine is able to cut the ribbon for the Catherine Fox Medical Center. Meredith learns that Tom has a son who died and he “slept walked” through life for years until Catherine reminded him he was alive; and she sings a mean harmony. He has the big guns and knows Catherine needs him. She has Grade 3 Chondrosarcoma, cancer in her spine and he doesn’t know how to remove it with killing or paralyzing her. Catherine approaches him, telling him if she can survive everything she has been through she can survive this too but she can’t do it on her own and needs them to figure it out fast; she excuses herself to call her husband.

Alex checks on the baby as the nurses dote on teeny tiny baby “Pancake”. Catherine calls Richard’s phone, but only gets his voicemail. Jackson sits alone in front of the fireplace as Maggie walks into Meredith’s home, avoiding the children and sitting on the stairs. She sends out a message to Meredith saying Jackson and her might be over. She’s half convinced the world is ending. Meredith gets a call from Richard, saying he has been arrested and to not tell Catherine.