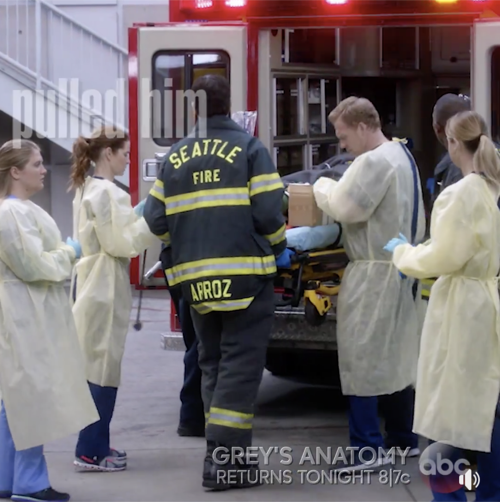 Two boys had been home alone when they got the bright idea to carry out a science experiment on tonight’s all-new episode “Grey’s Anatomy” and, not that surprisingly, they ended up losing control of their experiment.

It had actually started a fire that neither child could deal with, but they got lucky when it was Ben’s squad that answered the call because his boss Andy Herrera had taken quick action. She had come on the scene and had seen one of the kids was bleeding from his abdomen, so she just stuck her hand in there. She hadn’t known if she was helping and hurting yet she took the risk anyway and it turned out to be the right thing. The kid was suffering from an abdominal bleed that would have killed him if she hadn’t acted so fast and so she had to stay that way on the long drive to the hospital.

There, unfortunately, she had run into Schmidt. Schmidt was the intern that everyone called glasses because he had accidentally dropped his glasses into a patient while they were in the middle of surgery and so Schmidt was the sort of the klutz of the hospital. He managed to trip over himself than anyone else and, upon seeing Andy, he had immediately asked that she remove her hand. He had even been adamant about it and so it was a good thing that Andy didn’t listen to him. She had looked at him and had seen a child so she demanded that he go get an adult. That adult was Meredith and April.

The two had been warned about the boy suffering the bleed after they saw his brother and so they the first thing they said to Andy was a good job because she had kept the boy alive to that point. Yet, the doctors had needed Andy to stay in such a position and so they brought her into the OR with them though Ben didn’t have such a luxury. He couldn’t stay hanging around at the hospital and he didn’t have the privilege of getting information on either boy. Ben was a firefighter now and not a doctor so his boss told him to get back to the station. That’s where he belonged and still, he put off going back.

Whether it was because he was dissatisfied with his new job or missed medicine, Ben stayed at the hospital and he even had a conversation with Bailey. Bailey was back from her leave of absence or the vacation she liked to call it and she had wanted to go back to surgery right away. She said she was fine now and so she had gone ahead with the surgery on the older brother. The older brother was the one who had been teaching the younger a little bit about chemistry and he had been fine right up until he pulled out the large piece of shrapnel in his leg. So that caused a massive bleed and the intern that had been with him had saved his life by creating a tourniquet from her hijab.

Qadri was later asked by Owen how she could do that so easily and she told him that her faith was about service and compassion so taking off her hijab hadn’t been this big thing for her because it was to save someone’s life, but all the same, Owen had respected her actions. He knew that the patient would have died without her and so she truly stepped up in his eyes as well as made him proud. It was Owen’s job to teach her and he later told her how good she was by acting so calmly under pressure and so that when she made her confession. She admitted to him that she wouldn’t have been so calm or level-headed if the boy hadn’t survived his ordeal because she didn’t know how to handle if he died. Owen though had more faith in her than she perhaps had in herself.

Owen knew she would have been and he had been glad when his patient made it out of surgery ok. The patient’s brother, on the other hand, had had Andy’s inexperienced hand crammed into him and Meredith had even asked Andy to assist with the surgery. She couldn’t get a good viewpoint of the bleed and so she handed over the clamps to Andy because she wanted Andy to clamp down on the area right above her fingers. But Andy had needed to be talked through the experience and, once it was over, she hadn’t known what to do with herself. She was asked to leave the OR because her part was over and she didn’t that before choosing to stick around at the hospital. She had wanted to find out if the boy was going to be ok and so she eventually ran into Ben.

Ben had tried to convince his wife to take it easy because she had suffered a heart attack not that long ago and had just sort of stuck around when he failed to make Bailey listen to him. To be fair, she had also been ignoring Richard. Richard had wanted her to easy as well and so he had followed her into surgery on the whimsey excuse that there could never be too many doctors in the OR. The other doctors hadn’t really bought that excuse and so eventually did come out that Bailey’s vacation hadn’t been much of a vacation. She had been bed bound after leaving the hospital and being cooped up for so long had gotten her creativity flowing. She developed an easier way of performing a colonoscopy and she had been one of the few given the hundred thousand grant.

Not everyone had gotten so lucky. Alex and Amelia had gotten turned down for their project and so they went about doing their project on their own time. They used the time in between breaks to test out lasers because they wanted to see if they could get rid of their patient’s tumor that way and nothing they tried had worked out. So Amelia called her old mentor Dr. Tom Koracick and she got him to return to Seattle. She just hadn’t known that he flew all that way because he was hoping to sleep with her again and so his constant flirting got on Alex’s nerves. It was Alex’s patient that they were supposed to be saving and he hadn’t wanted to disappoint Kimmie Park who dreamed of one day singing on Broadway.

Except Koracick didn’t believe they were going to put some together while they were still time to save Kimmie’s life and so he had gotten close to walking away from the project when Amelia began yelling at him. She had yelled at him before and hadn’t meant anything to him then, but this time something he had mentioned had given Koracick an idea. He said that they could come at the tumor at another angle and be adding towards the distance between the tumor and the laser they planned to use. And while it hadn’t been perfect, it had taken longer that time around for when the beaker they were using shattered. Meaning they were finding new ways of improving and so Koracick decided to stay around to see the project through.

Meredith’s project, though, had hit a snag. She realized she needed to get the patent or at least consent from a former doctor in Spain that was demanding a lot of money and Andy helped her with that. She had gone with Ben to watch the surgery from the observatory and so she knew what was happening when Hellmouth entered the OR because she had spoken to Meredith about it when April was out of the room. So she told Hellmouth to pass her the phone and funnily enough, she convinced that old doctor to allow Meredith to use it. And so she helped Meredith with getting closer to completing her project and afterward she went looking for Ben.

Ben had been busy talking to his wife. Bailey had argued against him joining the Fire Department and he had pushed back without actually feeling the consequences so he was feeling that now. He missed being in the OR and helping patients yet he had made his choice and so he later left the hospital with Andy because they still needed at their Fire House. Though with everyone unsure about their next step, it had actually been April that they needed to worry about. She was out partying every night she didn’t have Harriet and Jackson had grown concerned about her. He had even gone to Arizona to ask if she would help and she had told him to back off. She said April was learning how to be happy without him and that he should just let her.

Then afterward she saw April at the bar partying hard with the interns and that included the interns that had been making fun of her back.