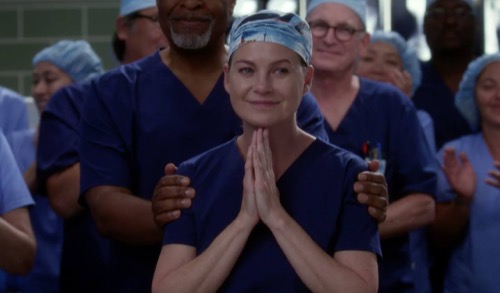 April wakes at the bar. A napkin is stuck to her face. Owen knocks on Teddy’s door. She opens surprised with a big smile on her face. Meredith talks to Dr. Marsh in the hallway. He tells her he just had a kidney transplant. Meredith realizes he is talking about himself when he collapses.

April meets with a new patient. He has a rash that won’t go away. April takes a look at it, touching it the skin peels off.

Owen tells Teddy he and Amelia are done. Nothing is standing in their way. They kiss.

Meredith checks out Marsh. He fears that his body is rejecting the kidney. Or maybe he has a clot. He came back early to give a long time patient a transplant.

April reports to her patient Eli with skin issues. She tells him he has TEN, a reaction to antibiotics that cause the skin to separate from itself. Bailey watches from outside. She is concerned. April comes out. They talk. Bailey prescribed him antibiotics. April scolds her. Jackson intervenes. Bailey didn’t know. It is a random reaction some people get. April refuses to hand him back over to Bailey, telling her if he dies it is on her.

Meredith performs an ultrasound on Marsh. He looks good. Meredith asks him about his pain. He doesn’t have any. He would love to see his labs though. Meredith tells him he will have to wait. She needs to go check on her patients. He keeps her there and talking. He tells her about his niece and how he has custody. He asks her about her own family. Does she have kids? Do they have a dad? He reveals that his mom passed away at 15. She had heart failure. He talks about being a transplant surgeon, traveling the world. He wants to know if she thinks he will lose his kidney. She doesn’t know.

Teddy and Owen lay in bed snuggling while it snows outside. They are giggling. They kiss. Later, Owen and Teddy are sitting by the fire, drinking, eating and talking about a coronary artery surgery. She asks him what he is doing here. Is he getting on a plane tomorrow? She has a life here in Germany. Her career is doing well. He would like to be a part of that. He can move and be with her. Or she can come back to Seattle. He hasn’t figured it out yet but he wants to be with her. He is in love with her.

They are in bed. Teddy asks Owen to stay a couple of days. Sure, he tells her. She is scared. Is he scared? He talks about Amelia and how even she thinks they should be together. Teddy gets upset. She cannot believe they talked about her. “When did she say all of this,” Teddy asks. Owen admits the two slept together last night and that is when she said it.

Meredith is back in checking on Marsh. They talk about what they would do if they weren’t doctors. He would be a shoe salesman. They laugh. It is her turn. She once visited a little village in Sardinia. She wants to go back there. They are alerted that his labs have come back. They are inconclusive. She checks him again. He has a clot in his renal vein. She calls for the staff. They rush him to the OR. He tells her everything he wants his niece to know if he dies.

April tries to make Eli comfortable. His wife is on the way. He talks about Bailey and how she is a good doctor. April’s facial expressions show she doesn’t agree. April reveals that Bailey should not have given him antibiotics. They start talking about April’s own life. He tells her there aren’t any guarantees in life. Nobody in the bible lived a life free of suffering. Eli starts coughing as he gets worked up. He tells her to have faith. She sounds like a child. He asks her if she is happy? She cries. He starts to fade away. He tells her to tell Bailey he forgives her. April tells him to hang on. She can help with his pain. He becomes confused. He thinks she is his wife. She pretends. He passes away.

Marsh comes to out of surgery. Meredith teases him for a second then reveals he is good. She saved his kidneys.

Teddy is angry. She tells Owen he is scared to be alone that is why he came running to her. She is done being his fall back. She runs around packing his things for him. He pleads with her. She tells him she is done. They are done. She shows him the door.

Alex meets up with Meredith at the bar. He tells her she looks like crap. She tells him about Marsh.