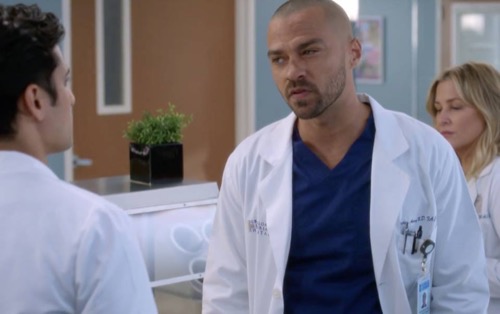 Tonight on ABC their hit drama Grey’s Anatomy returns with all-new Thursday, March 8, 2018, season 14 episode 14 and we have your Grey’s Anatomy recap below. On tonight’s Grey’s Anatomy season 14 episode 14 called “Games People Play” as per the ABC synopsis, “Maggie’s relationship with Clive starts to progress, and she invites him over for a game night to meet Meredith and Amelia. Meredith and Jo meet with the owner of the patent to the polymer they need for their project, who coincidentally is a friend of the family.”

A rough game of coed rugby led to several members of the team ending up in the Emergency Room on tonight’s all new episode of “Grey’s Anatomy”.

Members of the team had all gotten injured. Their assistant coach had even gotten injured and she had asked April to check her because she also suffered from a heart condition, but there was an incident when April tried to release the fluids from her patient’s ear. She had tried to remain focused on her patient and the other rugby team members had started to mess around. The guys started to throw balls to each other and April had warned them to cut it out only they wouldn’t listen to her. They kept throwing that ball until it knocked April and accidentally caused her to cut off her patient’s ear.

The ear had then landed on the floor and DeLuca had even slipped on it. He had gotten a pretty serious concussion and had stay at the hospital while the doctors monitored his condition though the “ear debacle” wasn’t quite over. It had to be reported and so Baily took what happened to the hospital lawyers. The lawyers had determined whether or not they were liable for what happened to the patient as well as one of the doctors and, in the meantime, they judged that April go on leave. So they left it to Owen to tell her and she hadn’t taken it well. April had thought it was unfair that she should be punished for what those dumb kids had caused.

It just hadn’t mattered what happened. The lawyers were concerned about appearances and so April was forced to leave the hospital however she had asked Schmidt to step in. She knew that Schmidt would trip over himself doing what he thought he should and so she left him in charges because by then she just stopped caring. April hasn’t been herself for some time and so she left the hospital to go on a bender. She got so drunk that she had later invited herself to Maggie’s Game Night. The Game Night was supposed to be Maggie’s way of introducing the man in her life to her sisters and she had wanted their opinion on him.

Maggie had told her sisters earlier that she used to ask her mom about the guys in her life and that her mom would judge them for her, but with her mother’s death, her sisters had offered to step in. Amelia said she was the best person to judge because she was sex deprived and she’s been telling almost everyone she met that she was sex deprived. She told her ex (Owen) that she was sex deprived and she had also asked him if he was having sex. He admitted that he was every now and they, so Amelia had gotten jealous because he was having sex while she wasn’t. She had also gotten into a thing with one of her interns.

Sam had asked about DeLuca because she had been concerned about him and so Amelia told her that she should go to DeLuca and tell him how she felt. The two were clearly in love with each other and the only thing stopping them from pursing that relationship is their past. In the past, they had been bad for each other and it had gotten ugly. Sam hadn’t wanted to go through that again and so Amelia knocked some sense in her. She told Sam that they were pretending to be bad for each other at this point when they could easily make it work this time around and that had been the push Sam needed. She went to DeLuca’s room in the end and without him having to say it – she told him she loved him too.

Amelia had therefore played matchmaker for the two and Koracick had thought that was sweet, but he had heard that she was sex deprived and had offered to help her with her problem. He let Amelia know that he was available and, for someone that complained so much, she didn’t take him up on his offer. She had wanted to sleep with someone and she knew she didn’t want it to be Koracick. Amelia had wanted to be Owen and so she later told Owen that he could make up for her helping him in surgery (on one of the rugby idiots) by sleeping with her, so he took up the offer. The two had gotten busy at the hospital and they had completely forgotten about Game Night.

Luckily, they hadn’t been the only ones that had forgot. Meredith had also forgotten about Game Night because she had wanted to sell her scholarship project to the one person that held the patent though the person that had the patent was someone that Meredith knew from her past. It had been Dr. Marie Cerone and she had been a family friend. She knew Meredith’s mother Ellis and used to be really close with Meredith when she was young until she moved away. Marie said she had to go back to Spain to run the family business and that she was sorry she hadn’t reached out to Meredith when Ellis died.

Meredith understood that it must have been hard for Marie and so she let what happened go because her mother’s death had bene hard on everyone, so she told Marie about her project. She told Marie that she wanted to use Marie’s father patent to perform miracle surgeries that allowed people to grow miniature organs and she had even showed Marie that she had managed to do that already with a mouse. So Marie had been amazed by the project and she had said all the right things yet she hadn’t wanted to talk about the price she was going to charge Meredith and so Meredith only realized she had been played when she talked to Richard. Richard had seen Marie leaving the hospital and it had been surprising to him.

Richard said that Marie and Ellis had had a nasty falling out and that the two had never forgiven each other, but Marie hadn’t mentioned any of that to Meredith and Meredith had incidentally given away her revolutionary idea to someone that could still be bearing a grudge. That’s when she knew she had been played and so raced home, not for Games Night, but for her mother’s journals. Ellis had recorded everything and so Meredith asked Maggie for her help in finding information on Marie in those journals. She had been so focused on that she completely missed what she had walked into back at the house. Maggie’s relationship with stock broker was over because his wife had interrupted Game Night and had followed him using an app on her phone.

The wife said that her husband usually slept with someone whenever she had to go out of town on business and so she hadn’t blamed Maggie. Maggie had been fooled by him because the jerk had gotten a lot of practice, so that abruptly ended Game Night and that turned out to be a great thing. The whole night had been a mess with April drunkenly hating on everyone, Koracick being his irritating self, and Jackson showing up with a girlfriend. The girlfriend was perfect and she hadn’t minded the many insults that April threw her way. She had merely remained calm under pressure and had led the others into leaving when Maggie found out she was a home-wrecker. And so this girlfriend was so perfect that Jackson had felt bad about breaking up with her.

Jackson realized he hadn’t wanted the perfect girlfriend and so he went back to the house after everyone else had left. Then he had told Maggie that he hadn’t wanted the girlfriend because he had wanted her and he also said that he had wanted to take her out on a real date. Therefore, the two were in the middle of something when Meredith showed up and so Maggie had had to bench a much-needed conversation with Jackson in order to be there for her sister. The same sister that forgot she was supposed to be there for Maggie. And so it was fortunate that Maggie didn’t hold a grudge.

The patient that had lost her ear on the other hand had had a father that was a malpractice lawyer and he threatened to sue the hell out of the hospital. The only thing that had stopped him had been his daughter who hadn’t wanted to sue anyone because she knew what happened had been a mistake and her ear was eventually reattached, so she had wanted to let bygones be bygones. That had been enough for her father and so he had let go of suing the hospital yet he hadn’t been the only one that had worried the hospital’s lawyers. They had been in the room when Alex had asked for permission to give his teenage patient medical marijuana. The marijuana was supposed to help his patient with her chemo and Alex had fought an uphill battle to get his request approved.

Alex had to deal with the lawyers and he had even had to deal with Kimmie’s grandmother who was worried Kimmie would turn into an addict like her parents. But Alex had calmed down everyone and Kimmie had finally received some normalcy for once.

And Arizona had found a doctor that could be putting her patient at risk because she wanted to get out of the office in time to enjoy her weekend.