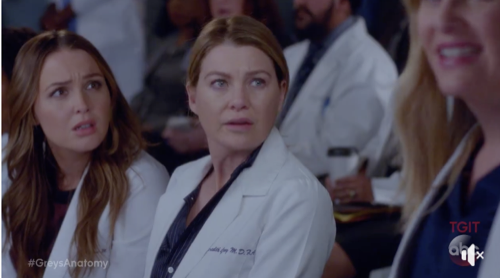 Tonight on ABC their hit drama Grey’s Anatomy returns with all-new Thursday, April 19, 2018, season 14 episode 20 and we have your Grey’s Anatomy recap below. On tonight’s Grey’s Anatomy season 14 episode 20 called “Judgment Day” as per the ABC synopsis, “During presentations on Grey Sloan Surgical Innovation Prototypes Day, Arizona shares some cookies from an appreciative patient that, unbeknownst to her, contain a special ingredient. Meanwhile, Catherine reveals some shocking details to Jackson about his grandfather’s past; and Jo steps in mid-operation on a major surgery after Bailey and Meredith are down for the count.”

The doctors at Grey Sloan Memorial were finally getting their chance to present their projects for Phase Two of their hospital first Surgical Intervention Contest on tonight’s all new episode of Grey’s Anatomy”.

These doctors had finished their paperwork and had second guessed everything they did, but what they hadn’t for a moment doubted was their interventions. They all had come up with something incredible and so they had gone in front of their board believing no one could find fault in their project. Except there was apparently a mistake behind the scene. The two women that had been grateful to Arizona for telling them that one of them didn’t in fact have cancer that they decided to make Arizona cookies. The cookies were buttery sweetness and had several drops of peanut butter in them for those that would have liked that added touch.

Therefore, the cookies had been delicious. They had been gifted to Arizona and she was so friendly that she shared them with everyone. Arizona handed out cookies at the presentation and everything had been going well until Arizona had heard from those same lesbians that gifted her the cookies. They told her that they accidentally cooked the cookies with cannabis peanut better. It was the same one that one of them bought for the other when they thought they were dealing with cancer and so those cookies were incredibly powerful. It’s actually a bigger high to ingest weed products than it is to some it, so Arizona had to warn everyone that had a cookie.

Arizona had gone into the conference room in which people were still presenting and she saw Meredith. Meredith had noticed that something was wrong and had asked Arizona what was happening yet Arizona’s situation had turned out to be laughable. She told Meredith and later Jo that she had given weed cookies to most of the attendees at the hospital and the ladies got to see the effects of what she did when Jackson started to make vagina jokes in the middle of his presentation. The joke hadn’t been all that funny and still, April was laughing uncontrollably because she too had eaten the cookies.

Arizona, Meredith, and Jo watched as everyone began to fall apart and so they came up with a plan. They decided to announce onstage that everyone that ate cookies was in trouble because they ingested cookies tainted by rat poison and so Meredith used that as an excuse to call an end to the day’s proceedings. She then gathered everyone that was high as well as in sight and had them taken to a small room. Meredith had waited until everyone was in the room to tell them that they didn’t have to worry about rat poison because they had accidentally eaten weed cookies. She then told that they had to stay in the room away from any patients and had even confiscated their cell phones.

Meredith had had to cordon off Arizona as well and so most of the attendees were out of it. She and Jo talked to the interns about the day’s events and Meredith said whoever did the most work (covering for their missing attendees) would sit in on a complicated surgery with her. Meredith had done everything to fix what happened and unfortunately there had still been a few surgeons that had gone unnoticed until it was almost too late. Bailey had started surgery on a patient with stomach cancer and she had hoped him up though she soon froze right after doing so. She knew something was wrong with her and had actually believed it was another heart attack.

Bailey had been so scared out of her mind that she called Meredith for help and Meredith found out the chief had eaten some of those weed cookies. Bailey was being paranoid and had needed Meredith talk her down as well as replace her in surgery, so Meredith said she was going do it. She agreed to take over the surgery and was getting ready when Bailey accidentally slammed a door on her hand as she was leaving to go to the weed room. That sorta put Meredith out of commission and that meant Jo had to take over. The resident was still unsure of herself and she had been nervous about operating on a man without an attendee right there to help.

Meredith had stayed in the room however she said this was Jo’s surgery. Jo had to make all the decisions and she eventually came across a hard one. She had seen that Bailey wanted to remove the man’s whole stomach and, while she was in there, she didn’t see why Bailey would want that seeing as she thought she could still save part of the stomach. Jo had tried to ask Meredith for her opinion and Meredith refused to give it. She reminded Jo that it was her surgery and so Jo came up with an idea. Jo remembered that Richard had come up with a pen that could differ between cancerous cells and normal cells.

Jo had sent Schmidt to get it and, while Schmidt doubted Jo’s capabilities, she proved him wrong by using the pen. The pen had helped her realize that she did need to save part of the stomach because not only did she save a man’s life, she was also going to save the quality of that man’s life. Jo was performing amazing things while her fiancée had needed to be watched. Alex had also eaten the weed cookies and so Amelia had taken him with her when she went over to Owen’s. Owen had found out he was getting a foster child and he was freaking out because the child was only six months old.

Owen had told DSHS that he was willing to accept a child anywhere from zero to seventeen and they had decied to go with zero when he thought he would most likely get an older child. Owen had thought he would have time to win over a child with things like ice cream and so he had no idea what to do with a baby. He had thought he was making a mistake when he agreed to take on the baby and Amelia had been there to support him because she knew he was overreacting. Owen had wanted a child for the longest time and so Amelia had reassured him that his dream was coming true.

Amelia had also gotten Owen all the things he needed to take care of a baby and so she stayed with him long after she packed off Alex to Jo with something to much on. So the day of drugs was coming to end and there had only been two missteps. There had been an intern that lied about not having a cookie and he had put both himself and a patient at risk, so Richard happily fired him because he didn’t need someone that was so focus on surgery that they didn’t care about anything. The other misstep had been the Harper Avery scandal. Jackson had released a woman from her agreement with the company not knowing that she had been paid to sign a NDA because his grandfather had sexually harassed her.

Catherine had tried to hide the secret for so long that she revealed everything to Jackson after eating one of those cookies. She told him that there had been thirteen women that had been sexually harassed and that part of their agreement that these women signed had also stated that they couldn’t work at a Harper Avery Hospital or apply for Harper Avery award. Catherine hadn’t wanted to cover up what happened and at the time she thought that at least she was helping them by giving them money when they could have faced such abuse without having any sort of recourse. She now realized that it was just making a horrible situation even worse and so she had had to come terms with that. And luckily Jackson had helped.

The two were now facing a scandal because everyone was talking about the Harper Avery legacy and so Meredith had had a question. She wanted to know if her mother was harassed and Catherine said it hadn’t been her. It had actually been Marie Cerone and so Meredith’s mother had taken her friend’s name off the paper they both wrote because she had wanted to win a Harper Avery, which wouldn’t happen if one of the women the man paid off had tried to enter the contest.