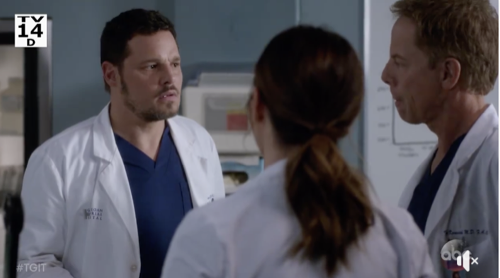 Tonight on ABC their hit drama Grey’s Anatomy returns with all-new Thursday, April 5, 2018, season 14 episode 18 and we have your Grey’s Anatomy recap below. On tonight’s Grey’s Anatomy season 14 episode 18 called “Hold Back the River” as per the ABC synopsis, “Amelia, Koracick and DeLuca perform a risky, groundbreaking procedure using ultrasound waves to remove a young patient’s brain tumor. Meanwhile, Meredith and Jo work with different polymers to try to salvage their project submission; and Richard’s AA sponsor is admitted to Grey Sloan with a DNR.”

Love was in the air! Everyone was loving their time with either their spouse or significant other and Ben had even believed he was being super romantic when he got a case for Bailey. Bailey still has to take a lot of medications and so Ben thought he was helping when he got her case to hide her pill case. He remembered how Bailey didn’t like people finding out she was sick and she could hide it better than before with the case he got her. She just hadn’t liked the gift. Bailey had thought she was being surprised with a romantic gift that was actually romantic and therefore she had been let down when her gift was something she would never want.

Owen was also disappointed with his love life. He thought he was finally going after someone that was meant for him and it turns out Teddy already needs space. She didn’t want to talk and she sure didn’t want Amelia calling her to get her opinion on Owen. Owen and Teddy’s relationship was up in the air and no one was going to change that, so he started snapping at people. He later snapped at Arizona at the hospital when she asked him about Teddy and he was that unpleasant with everyone. There was nothing any of friends could say that would help and so they all did their best to drop the subject.

Amelia worked with Alex on speaking to their patient Noah about this new procedure. He was being treated for uncontrollable laughter that were symptoms of mini-seizures and so the doctors decided to try out their new procedure on Noah because they didn’t want to cut into him. He was still a young kid and his symptoms weren’t as bad as say Kimmie’s. Kimmie had developed a second tumor not long after getting rid of her first one and another surgical procedure could make her lose her voice permanently. No one wanted that for Kimmie because they all knew that she dreamed of one day singing on Broadway and so her case helped them come up with the new procedure.

The new procedure would allow surgeons to use laser to remove tumors and perform brain surgery without having to actually go in there. If it worked, it could be the beginning of new way of life for people that need the help and not the healing time and so everyone wanted this procedure to work. Amelia later performed it with the help of her mentor Koracick and things were going great at first. They saw Noah’s brain react to the treatment and were hoping for more of the same when Noah’s brain became overheated. He could only take the laser for so long before it gets overheated and so they tried to spread out the procedure through several treatments.

They tried using the laser again at another time and again they ran into the same problem. It was too much to take care of with the short amount of time the doctors had and so Koracick called it. He told them no more or they risked turning Noah’s brain into soup and neither of them were sure if they hadn’t given the poor child brain damage on the work they did do, so they pulled Noah out of there and then played the waiting game. He was put in a room for observation and Amelia couldn’t leave his side. She was so worried about what she did to him that she didn’t have it in her to color the situation for Alex and she knew how important the treatment was to Alex.

Alex had wanted the treatment to work because Kimmie was his patient and he could see how she was giving up. She had wanted to be in school with her friends and perform at the spring musical when instead she was stuck in the hospital. Kimmie was too sick to be released and she thought she was giving up on a life she could have before it was too late. Alex had tried to reassure her and that just didn’t work. There was nothing he could say that could make her forget she could die or wish she was dead and so he and the others paid a lot of attention to Noah. Noah hadn’t woken up the day of his procedure and neither of the interns working the case had heard anything good the next morning.

Sam and Deluca had spent the whole night at the hospital. They would have known if anything changed and it hadn’t, so the only thing they could talk about was this latest problem Sam noticed. She noticed that DeLuca never invited her back her place and so she looked around the call room for answers. Sam had wanted to know if DeLuca was sleeping/living at the hospital and it turns out he was. He explained to her that her that he was living with Arizona until Arizona began sleeping with his sister and that he had been living with Owen when again his roommate began sleeping with his sister.

DeLuca had been embarrassed by the situation and so he didn’t find as funny as Sam did. It just was hard for her not to laugh about the roommates kept losing because they were sleeping with his sister and so she decided to help DeLuca with his problem by asking him to move in with her. They loved each other and she believed that wouldn’t change once they were living together. Then when the two weren’t looking, Noah woke up. He woke up and he only started laughing when he watching a cartoon. Other than that, he was fine and the doctors were so proud of him that they couldn’t wait to move forward.

Koracick had even celebrated. He had hugged Alex of all people and they hadn’t liked each other. In fact they still don’t like each other, Koracick was merely too happy to care and that left him in a reflective mood afterward. He had talked to April and he had been one of the many people she apologized to for how she’s been acting though he hadn’t cared about that and the reason he had been reflective had been because of Kimmie. Kimmie’s surgery was supposed to be next and the doctor knew she couldn’t be. He realized that Noah surviving had been fluke because none of them had known what they were doing and they risked almost killing Noah.

That’s why the procedure needed to remain on easier to fix patients. Not patients like Kimmie’s whose tumor was too advanced for them to treat with one treatment alone and so he broke the news to Alex. Alex had thought Kimmie would be next and he had lashed out when he had been told differently. He had put his hands on Koracick and would have hit him if something inside reminded him that he wasn’t that person anymore. He couldn’t be the same guy that beat up DeLuca and so he had walked away in that situation because he knew getting angry wouldn’t change anything. And Jo had felt for him.

Jo had been working tirelessly with Meredith to recreate their successful procedure of re-growing mini-livers and everything they had tried had failed. Nothing worked and Meredith couldn’t even focus on the project. She got roped into helping a friend of Richard’s. He had gotten her and Maggie to check out his AA sponsor Allie because Ollie was suffering from liver failure and he couldn’t handle it. He kept trying to find ways to keep Ollie alive and she had made peace with what was happening. She was ready to die and it wasn’t until Richard could accept it that he finally made things good with her.

Richard had seen Amelia was having a rough day and so he brought her into Ollie’s room where they had an impromptu meeting. They began their meeting with prayer and they were the only ones that had turned to their faith. April had found her way too in end and that’s why she was apologizing to everyone. She apologized to the people she bullied and she also apologized to both Jackson and Maggie. They both forgave her because they could see that April was going through something and so she had shared some laughs with Maggie. She had said she was sorry for treating Maggie like crap at game night and Maggie said that night had been wrong on so many levels.

Maggie remembered that she was sleeping with a married man and so April told her that she had slept with the jerk intern, Koracick, and that she had even jumped Jackson in a supply closest. April thought she was just sharing how much of a mess she was and she hadn’t realized she was hurting Maggie. Maggie was with Jackson and Jackson hadn’t mentioned that at all, so she was angry and Meredith was surprisingly happy for once. Meredith had realized her procedure could work with a polymer and so she could defeat Marie Cerone without one. She and Jo had celebrated their win and in another part of the hospital Alex was breaking the bad news to Kimmie.

And while Owen started out snapping at everyone, he eventually found someone else to take his anger out on when he found out another doctor was making women believe they had cancer when they didn’t and so that allowed him to at least get angry at the right person.