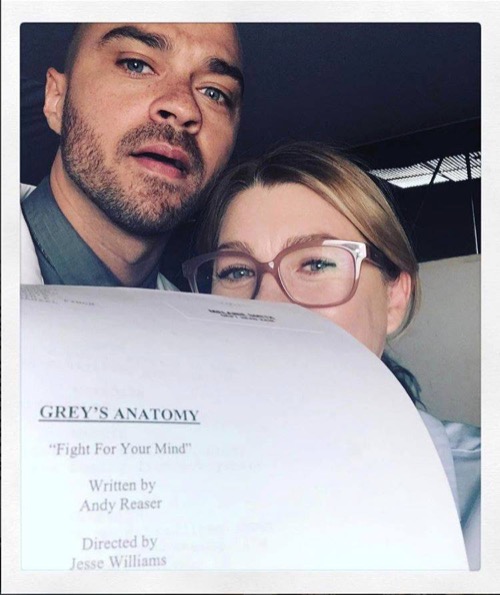 Tonight on ABC their hit drama Grey’s Anatomy returns with all-new Thursday, May 3, 2018, season 14 episode 22 and we have your Grey’s Anatomy recap below. On tonight’s Grey’s Anatomy season 14 episode 22 called “Fight for Your Mind” as per the ABC synopsis, “Alex and Jo go on a road trip to Iowa to find Alex’s mom, whom he hasn’t heard from in a very long time. Meanwhile, Meredith gives a presentation on her mini-livers project, which attracts a ton of attention; and Jackson works to rebuild the foundation after its reputation is threatened.”

A former intern at Grey Sloan Memorial Hospital was suing the hospital on tonight’s all-new episode of “Grey’s Anatomy”.

The former intern was Dr. Vik Roy. Roy had gotten fired a while back for making a stupid decision. He had lied when he had been asked if he had accidentally consumed a pot cookie and the reason he lied about hadn’t even been about getting in trouble. There had been plenty of people that admitted that they had eaten a cookie and they had been cordoned off at the hospital so that they neither hurt themselves or risk hurting anyone else, so Roy lied about not having a cookie because he wanted to keep working. He had heard that the intern that performed the best that day would get the chance to scrub in with Meredith Grey and so he let his ambition overrule common sense. He told everyone that he was fine and then went on to hurt himself.

Roy had been called in on a case because the patient had needed immediate care and so he went to the hospital room only to then realize that maybe he shouldn’t risk a patient. When he realized that, he ran out of the hospital room and collided with a crash court that resulted in him getting a scalpel stuck in his arm. It had easily been removed afterward and he hadn’t suffered any damage. Roy had just gotten fired for lying and so he was back now suing the hospital. He was being represented by his brother who was also his lawyer and they told Bailey they had a case. They said that the cookies had been offered to Roy by a superior and that he hadn’t known that he was compromised because he had also been high at the time through no fault of his own.

Roy and his brother had thrown the blame onto the hospital and Bailey realized she would have a hard time refuting that. She also realized that Roy was willing to drop his lawsuit if he could return to work and so she tried to find a way around that. Bailey went around the hospital asking everyone’s opinion of Roy because she wanted to find enough evidence to validate firing him and unfortunately she couldn’t find the right sort of evidence. She listened to how he made fun of someone who tried to cut his arm off to stop himself from masturbating and she also listened to how he entered a sexual relationship with an attendee who was reportedly vulnerable. Neither of them was cases that they bring in front of a judge and so Bailey dismissed.

Bailey even dismissed Schmidt’s testimony that Roy deserved to get fired because Schmidt’s whole justification on the matter was if Bailey could admit she was on drugs then so could Roy. That wasn’t the best defense they had at their disposal and so Bailey eventually relented. She agreed to allow Roy back at the hospital as long as he agreed to a one-year probationary period and if she didn’t have to apologize to him. Bailey also added that she would be up to his butt that whole year and that if he managed to survive it – she would teach him how to become an incredible surgeon. So Roy decided to accept that offer. He knew that Bailey and Webber were the same doctors to train the likes of Meredith, Alex, and also Cristina Yang (even if she was overseas.)

Roy didn’t get everything he wanted out of his threat, but he got enough and the hospital that had made itself so invaluable had had another important event that day. The hospital had moved past their old connection to Harper Avery by structuring their organization and they had also made the victims for grievances, Jackson had agreed to pay the victims out of his own pocket and so he basically used up most of his fortune. He had some left that he put aside for his daughter with April and the rest he had in the property. Jackson owned several places and a yacht of all things so he knew that he could liquidate that if the going gets tough. And while everyone still wanted to talk about Harper Avery, Meredith managed to change the topic.

Meredith held a conference on her proven theory. She was able to create mini-livers in a rat that had the potential to revolutionize organ transplant. Meredith thought she was ready to share her medical discovery and she had been looking forward to the conference until she spotted Marie Cerone. Cerone was attending the conference and Meredith hadn’t wanted to face her now that she knew the truth, so she went across the street to the bar and she ended up meeting someone. He was a doctor like her and he was in town attending the conference. Meredith got to talking and she eventually told him everything. She told him about what her mother did and he actually helped her realize that there was something she could still do to make the situation better.

Meredith later went to the conference and before she started to tell everyone about the mini-livers, she told them about her mother and how starting from now the Grey Method would be called the Grey Cerone Method. She then went on to talk about what she found and how it could be used. Meredith had seen Cerone after the conference and Cerone had wanted to talk her except Meredith did what she did because it was the right thing and so she hadn’t wanted to talk to Cerone. Cerone had been willing to betray her and that’s something Meredith couldn’t forgive. Meredith would probably have preferred discussing things with Alex however Alex had to leave town at the last minute to check on his mother.

His mother hadn’t been cashing any of the checks he sent her and so he went to check on her because he hadn’t known if she was off her drugs or her possibly dead. Therefore, he went to see her and he found out for himself that she was back at work. Helen Karev’s condition had finally become manageable enough for her to hold down a job and she hadn’t wanted to tell Alex because she hadn’t wanted to “bother” him. Alex did his best to tell her that she wouldn’t have bothered him and that if she was feeling better than she should have talked to him only that just caused a fight. His mother wasn’t exactly cured. She needed a strict routine to keep functioning and she didn’t like talking about it with Alex because doing so agitated her.

The two eventually needed time to themselves to work through the past hurt and so when they were able to talk without fighting – they actually got along. They talked about her routine and Alex introduced her to Jo. Jo had been very sweet to his mom. She told the other woman that they wanted her at the wedding and that it was okay if she couldn’t handle the travel. They both just wanted Helen to be doing better and so they made peace with their new normal because Alex was happy to get a mom. His mother has been sick throughout his entire childhood and he was willing to put the work in now that she was better. And so everyone decided to keep in touch following the visit because they wanted to remain part of each other’s lives.

Meanwhile, Amelia’s plan to help didn’t go as planned. She had tried to help a teenage mom get herself clean because she wanted Betty to be able to raise her son one day and the plan hadn’t worked. The teenager asked to use the bathroom so that she could escape through the window and get high. Amelia had tried looking for her and she hadn’t found the teenager in time, so she later went to a meeting. Amelia had needed to discuss with others her own struggles and she learned to help Betty might be an uphill battle. And while Amelia’s plans on mothering weren’t going as she hoped, Arizona was forced to confront her problems with Sofia. Sofia had been acting and she went too far this time because she got suspended from school for stealing the money for the class field trip.

Arizona tried to figure out what to do with Sofia. She thought she should stop pandering to Sofia because that’s what Carina suggested and this entire time it turns out Sofia was acting out because she missed her other mom. Callie was still in New York and Sofia hadn’t wanted to live without her, so Arizona made the decision tonight that Sofia deserved to go back to New York to live with Callie.