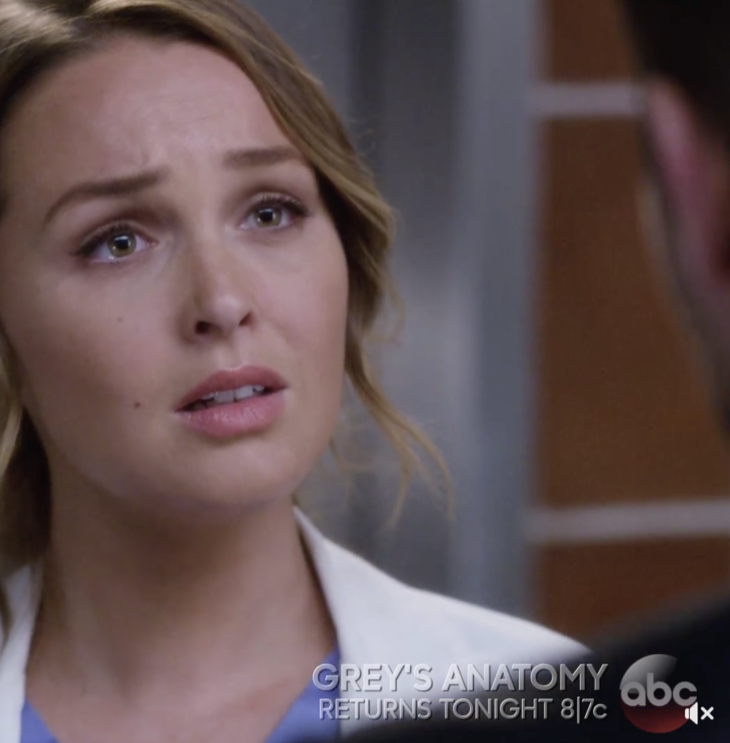 Jo froze when she ran into her ex-husband. She had just stood in place as he greeted her and told her how good she looked, but even as she stayed there frozen in motion, he didn’t seem fazed at all. Dr. Paul Stadler actually had the nerve to tell her that she looks good and that he was glad she got the help she needed. But if he was putting on a show, it wasn’t for Jo’s benefit. It was for his fiancée’s who he brought with him to introduce to Jo and thank her for agreeing to the divorce because he was ready to move on now. He said he wasn’t the man she remembered and that he was doing good for himself.

But then Arizona had approached them because she recognized Paul. Paul was famous in the medical community because of the paper he wrote and so Arizona couldn’t laud him enough. She thought he was a great doctor and had been surprised when he said he knew Jo. Jo he claimed had been a student of his back when she was studying and he said she probably wouldn’t remember his paper because she had been too much into partying at the time though Jo hadn’t been able to continue to take it as her ex-lied about her. He was painting a very colorful picture that made it seem like she had been the problem and so Jo couldn’t wait to get away from him.

Jo excused her as more of Paul’s fan were coming up to him to say it was an honor to meet him and she went right to Alex. Alex had asked her to check something for a patient of his and she had gotten the information he needed yet the text she sent him hadn’t gone through and so the first thing Alex had asked about when he saw her was that information. He needed to know if he gave his child patient the wrong drug and unfortunately, Jo gave him the news that he did just a little too late. But Jo had then tried to explain why she hadn’t run right over to tell Alex and she ended up changing her mind because she could see how much Alex’s attention to be put elsewhere.

Jo realized she couldn’t tell Alex what happened because he had to focus on her patient and she thought she could handle her ex-being around on her own. But she couldn’t. Jo broke down in tears for a while and afterward she followed Paul into surgery. He had convinced Richard to allow him to scrub in because the hospital was short on staff and so he had gotten prepared alongside Alex, who finally realized he was in town before he went on to assist Meredith who didn’t realize who he was until he introduced himself. That’s when Meredith knew she was sharing her OR with a monster and she couldn’t get rid of him because she truly did need the assist.

The intern Meredith had been using and the one they had all nicknamed “Glasses” had taken a nosedive in surgery after giving up too much blood to the patient. But as that was Glasses second fall in an OR, Richard thought Paul could be of more use to Meredith and had sent him in there not knowing what he was. Meredith, on the other hand, did know what he was and so she warned from the very beginning that she was a friend of his ex-wife. The same ex-wife he used to beat up and so Paul tried crafting a story with Meredith as well. He told her that Brooke (Jo’s real name) was very troubled and that nothing he had been enough.

Paul claimed that Jo was a drunk who let her wildness and partying ways get out of hand. But he also claimed that she was like that because she never felt loved as a child and so he said that he tried to give her. Paul claimed that he did everything possible to make Jo believe she was lovable and that eventually she ran away with a good chunk of his money because he couldn’t take it anymore, but Jo had been in the gallery and so she heard everything that Paul claimed. And ran out to Meredith once the surgery was over because she wanted Meredith to know that Paul takes things from her past in order to build his own twisted narrative.

It what he’s always done and so Jo just wanted Meredith to know that. But Meredith told Jo that she knew who she was and that meant she never believed Paul’s version. He had a reason to lie and so all that Meredith and also Alex wanted to do was support Jo. They asked her what she wanted and Jo told them that she was ready to get a divorce. So Alex believed he should go in with her when she signed the papers with Paul and that way he could rectify his previous mistake of not killing Paul when he had the chance, but Meredith told him that’s why he couldn’t go with Jo and so she went with Jo instead.

Meredith made sure that Paul never talked to Jo and that he never even came close to touching Jo. But Jo had wanted to do something before Paul left with his fiancée. The fiancée had no idea what she was getting herself into and so Jo asked Arizona to stall Paul while she talked to the other woman. The woman, Jenny, hadn’t wanted to talk to Jo at first because Paul had told her that his ex-was crazy and so Jo just asked her to listen. She told Jenny about the time Paul punched her for talking to another man at a dinner party and the time he kicked her so hard it broke her ribs because he saw that she had emailed someone he didn’t recognize.

But because they were running out of time, Jo gave Jenny had a card and told her to call if something were to ever happen. Jo said she would help her get out the moment something happened and so Jenny took the card. Then she later made the mistake of telling Paul what happened and she gave him the card which was what made him lash out. He went back to the hospital to tell Jo that she wasn’t going to ruin his life again like when she ran off and that now he knows where to find if he needed to yet Alex had tried to comfort Jo afterward and nothing he could say would make her feel safe.

Paul had their home address and could target her whenever he wanted. But while the hospital eventually returned to sanity thanks to one doctor hacking the hackers, there were still a few things that were off. Jackson and Maggie had finally talked about their possible feelings for each other and had both believed that it would be too much to try anything because of all the baggage that would come with them dating. So people were walking away from their chances, interns were apologizing for passing out, and everything had seemed like it would return to normal through the next day Paul had been brought into the hospital as a patient.

Someone had run him over with a car and fled the scene – so Meredith wanted to know if it was Jo, Alex, or the both of that did it!