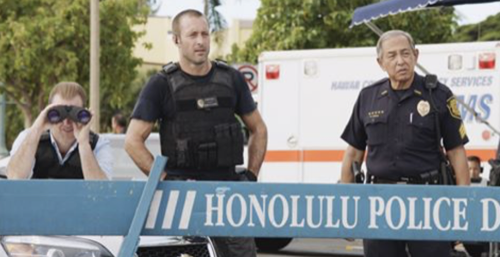 Tonight on CBS Hawaii Five-0 air with an all-new Friday, January 12, 2018, episode and we have your Hawaii Five-0 recap below.  On tonight’s Hawaii Five-0 season 8 episode 13 “O ka mea ua hala, ua hala ia (What is Gone is Gone) ” as per the CBS synopsis, “When a man accused of killing his wife threatens to commit suicide, Grover reveals how he too was once on the brink of taking his own life.”

Lou was experiencing a rare day off with his son. His son Will was growing up fast and he still had a lot to learn about women because he thought he was supposed to solve his girlfriend’s problems when what she really was for him to act as a sounding board. But Lou knew where Will went wrong and so he tried to advise him. He told his son that God gave him two ears and one mouth for a reason, however, Will wasn’t really listening to his father because he got an alert on his phone. It was one those alerts that detailed a car a person of interest was driving and Will had been the first to notice the same car from the alert was right in front of them.

Will, of course, pointed out this car to his dad and so Lou decided to go check it out. But Lou told his son to wait in the car while he handled things and he hadn’t thought the situation was going to take long. He approached the vehicle identifying himself as a police officer and had asked the man driving that he should step out with his hands on his head, but the suspect refused to do either. Brad Woodward had decided to stay in the car because he hadn’t wanted to leave the car alive. He had a gun to his head when Lou approached the car and so Lou did everything possible to talk Brad down.

But Brad couldn’t be reasoned with. He was suspected of killing his wife who fell several stories from their apartment and Brad swore that he didn’t kill her yet there was too much evidence. The police were called to his apartment on several occasions because of suspect domestic abuse and the only reason they never filed charges was that their hands were tied. Tracy refused to say whether or not her husband hit her, there weren’t any visible bruises, and the police themselves had never witnessed the abuse in person so they were stuck. They couldn’t do anything besides respond to a call from the Woodwards’ neighbors and even then they tried to get through to Tracy.

Victims of abuse tend to blame themselves for what their partners did because they believe that somehow they could have stopped said partner from getting angry or hitting them. But the police couldn’t convince Tracy that she was in a toxic environment and now it was too late. She died and everyone including the police believes Brad had a hand in it. Brad, on the other hand, claims that he had left the apartment that night and that he had been when Tracy killed herself, but Lou asked him why he believed that because he needed Brad to keep talking and so Lou was getting the whole story of what really happened that night as the police slowly started to surround them.

Five-0 was also called to the scene. They were notified by Will who knew his dad needed backup and so the only problem with providing that backup was that Lou didn’t want it. He had gotten Brad to open up and surprisingly he believed Brad. Brad said his wife was clinically depressed and that she was riding high one moment then came crashing back down without any kind of forewarning. He also said that he couldn’t take it anymore. Brad grew tired of her threats and trying to stop her from hurting herself through what he made him get to that point was because his wife refused to all treatment.

Tracy hadn’t wanted to go see any doctors or even admit that she had a problem. But by doing that, she forced it to be Brad’s job to keep her alive and so the fact she finally followed through on her threats on the night he needed to get out of there was something Brad regretted. He felt like he should have stay behind to help her and so he blames himself for her committing suicide, however, Lou told him that it wasn’t his fault and that he understood what happened because he went through it himself. He had tried to kill himself and his wife had done her best to stop him. And so he pretended for her.

Lou pretended like everything was ok and that he was getting better. But in truth, he had still been planning on kill himself so he waited until the house was empty and had been just about to do it when he heard a crash coming from inside the house. It had been his son Will skipping school and so Will was what stopped Lou from going through with his plan. He chose afterward to get some actual help and that’s why he was still here. So Lou told him about his past and he got close to getting Brad to put down the gun when Brad’s father-in-law showed up. The father-in-law didn’t believe his daughter could have killed herself because he said he would have known. And so the father-in-law showed up to kill Brad.

First, he tried to get close enough to shoot Brad with his own gun and then later he took a gun from one of the police officers to kill the man he blamed for his daughter. But not only did Brad manage to survive the assault, he was also cleared in his wife’s death. There had been a security camera in an ATM across the street and it caught Brad leaving long before his wife killed herself. So Brad was telling the truth and he would have gone on to kill himself for keeping her condition a secret when Lou finally got him to put down that gun because he wasn’t to blame. He couldn’t save someone that didn’t want to be saved.