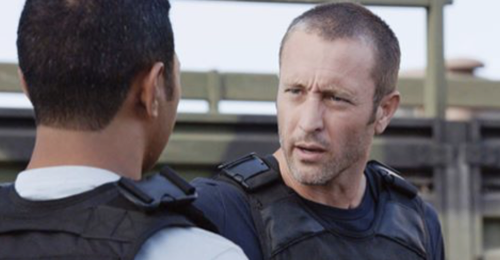 Tonight on CBS Hawaii Five-0 air with an all-new Friday, January 5, 2018, episode and we have your Hawaii Five-0 recap below.  On tonight’s Hawaii Five-0 season 8 episode 12 “Ka hopu nui ‘ana (The Round Up)” as per the CBS synopsis, “When an FBI agent who was cracking down on organized crime is killed, McGarrett rounds up every gang-related criminal on the island to find the culprit. Also, McGarrett tasks Adam with forming a new division within Five-0 to take on organized crime.”

Special Agent Douglas Fischer of the FBI came to the Big Island to lead a task force against organized crime on tonight’s all-new episode, but unfortunately, he also made himself a target. He held a televised news conference on his first day and basically said he was willing to do anything to put an end to the violence plaguing the island. He also mentioned that the violence seems to have picked up in the last few weeks and that he would get answer the question of why that was. So the people he was bound to go after had decided that it was best to make a preemptive strike and they went after him. They bombed his home killing everyone inside which included Fischer, his wife, and his young daughter.

His daughter couldn’t have been any older than ten years old and she had been clutching her teddy bear when she died. But McGarrett vowed to catch whoever was responsible. He had met Fischer earlier and the two had had some difficulties with understanding the other’s position because Fischer suspected Adam could be the reason why the Island blew up recently. Fischer had believed that the fact the crimewave kicked in right around the time Adam returned to the Island without his wife wasn’t a coincidence and that neither was Michelle Shiroma’s recent passing. He knew that both had been connected to the Yakuza and that Adam could have taken over without anyone being aware.

The only problem was that Fischer went about his investigation the wrong way. He approached Tani with his theory and had more or less asked her to spy on McGarrett for him because he thought McGarrett was too close to Adam to be subjective about his investigation. So Tani went to McGarrett with what happened and McGarrett went to Fischer to vouch for Adam. Adam had turned his life around and McGarrett didn’t like it when people doubted his friends or talked to someone on his team without his say-so. And so the two men were on opposite sides when it came to Adam, but all that was put away when Fischer was murdered alongside his family.

That’s when McGarrett decided to follow their one possible lead and have every big-hitter of organized crime be brought in. His team, HPD, and SWAT team were carting people away hoping to get answers about who was responsible for what happened to Fischer and that led to a few problems. They rounded up the first group with ease and ran into some problems when the bosses started to realize what happens. The guys that run these crews could command their own armies and weren’t afraid of bringing their people together once they realized Five-0 was going to “deal” with them.

But Five-0 had a backup and were able to deal with any problems that came up. Like the several attempts on all of their lives as well as one guy that had an underground tunnel under his home as an escape route. None of that mattered. Five-0 brought everyone in and they questioned for answers on end without one person giving them a credible piece of evidence. They merely all turned on each other with one man blaming the other and so McGarrett questioned if any of them was involved. He made a call to Jerry about the secret mics in the cells and Jerry hadn’t picked up anything on them.

The most he had found out had been that one guy buried thousands of dollars in his backyard so the mics hadn’t given him anything he needed and he had had to do his own research. Jerry had decided to study which organization was doing what and he soon learned that the Yakuza were the only ones that hadn’t lost people in the recent gang wars. The guy that had taken over from Michelle, Brandon Kenzo, had gone into hiding and he was the only one that wasn’t suffering any significant losses. So the team theorized that he could have killed Michelle and then waited for the other organizations to take each other out. And so McGarrett turned to Adam for help.

Adam still had a lot of connections to that world and he was hoping Adam could lead them to Kenzo’s hiding place, but Adam had been brought in by the FBI. Fischer’s partner had continued where he left off and thought Adam was responsible for everything that’s happened because Adam visited Michelle in prison the day before she died. She had apparently reached out to him through an intermediary and had asked to see him so he went to see her. He later explained to McGarrett that he had been curious and that’s why he went. Except Adam told McGarrett when McGarrett rescued him from the FBI that Michelle had wanted his help in exchange for telling him something important.

She wouldn’t tell him what was until he agreed to help her get a message to her kids and so he walked away from her. He said that whatever it was wouldn’t have been enough to be her puppet. So McGarrett chose to forgive Adam for hiding that and had gotten Adam’s help in finding Kenzo. Kenzo had shut himself up in a warehouse and was doing just fine. He had alcohol, women, and a television and so Kenzo had needed some persuading before he handed himself over to McGarrett’s team for questioning. And Adam had told Kenzo that if he agreed to surrender without violence then he wouldn’t end up dead in the fallout.

So Adam got Kenzo to surrender and Kenzo explained that he hadn’t been behind the hit on Michelle or on Fischer’s family. He said he would never be that crazy and funnily enough he was telling the truth. The facility that was housing all the other gang members had gotten hit while Kenzo was in custody. It seems that someone broke into the facility, killed several police officers, and then executed all the gang leaders on the island. And so that proved that there was a new player out that hadn’t wanted to share the Island with anyone else.