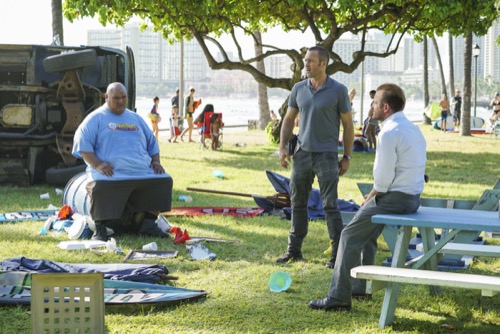 Tonight on CBS Hawaii Five-0 air with an all-new Friday, October 12, 2018, episode and we have your Hawaii Five-0 recap below.  On tonight’s Hawaii Five-0 season 9 episode 3 “Mimiki ke kai, ahuwale ka papa leho (When the Sea Draws Out the Tidal Wave, the Rocks Where the Cowries Hide are Exposed),” as per the CBS synopsis, “Crime spikes when a heat wave hits Oahu, causing McGarrett and Danny to hunt down a bank thief, and Tani and Junior’s car is stolen while they’re on duty. Also, Grover plays the golf game of a lifetime, and Kamekona incites a riot by price-gouging on his shave ice.”

There was a heatwave on the Big Island on tonight’s all-new episode of “Hawaii Five-0”. The heat was so stifling that tempers were running short and HPD called the team for additional backup. McGarrett and Danny couldn’t come in because their power went out at their restaurant, but they had offered Tani and Junior’s services and so two of their own had been out on the streets when the call came in. Two police officers were gunned down in cold blood. They were killed by the perp they were transporting. She claimed to have gotten overheated in the back of their squad car and they pulled over to grab a bottle of water for her. Her name was Tracy Benson and she managed to grab one of the officers’ guns and as well as kill three people all with her hands still handcuffed. The third person she killed had been a motorcyclist that was simply passing by the scene when she killed him.

No one knew why Benson was reacting so violently however her escape did get McGarrett and Danny away from the restaurant and so they did their best to work off what they had. The perp had been too skilled to have had no training and so that was the first red flag. The second red flag had been her charges. She was being taken in for assault. Benson had beat up her landlord for failing to fix her air conditioner and she had no priors before that incident. So Benson would have been given counseling at best and, for some reason, she hadn’t wanted anyone to run her name. The guys asked Jerry to run a full background check and he found what they expected. Benson wasn’t the perp’s real name. It an alias she stole from a real person that died several years ago and so the guys had no idea who “Benson” really was.

Kristine, 9:59 PMPart 2/2The story she had even told the Landlord had been faked. There was no disability check and there was no record of her opening a bank account under her fake name. The guys thought they’d have better luck if they go back to Benson’s apartment and it turns out there had been another lie she told. Benson attacked her landlord because she said he hadn’t been moving fast enough to fix her air conditioner and the first thing the guys noticed about her apartment had been the air conditioner running just fine. It was cool inside and so the guys looked for what really must have set off their perp. They looked around and they noticed that the air vent looked open. They looked inside of it and saw that something had been there for a while and that it wasn’t there anymore. And so at first, they thought maybe that’s where she was keeping her insurance moment.

The perp did claim that she was living off of money she earned in an accident. Only Jerry later found out her real name. She was Allison Ross and she used to rob banks back in the day until she had been caught with her crew. They had all been sent to prison and they would have stayed there for the guy they killed yet Ross was able to escape during a transfer. She’s been living under the radar with some of her ill-gotten gains when the air conditioner went out and she decided to leave the apartment. Ross’s landlord must have let in the repairman while she was gone and by the time she came back she had been robbed. That’s why she beat up her landlord! She must have needed a name and so Five-0 knew where she was going. She was going to kill the guy that stole from her and get some of her money back.

It had taken Jerry a while to track that down because he had been helping a guy who’s pregnant wife needed to stay cool, but by the time he got the information to the guys, it had been too late. The repairman was dead and Ross was once again on the run. There weren’t any sightings or even whispers about where she might have gone. She was just gone! The guys knew that they lost her and so the only thing they had to hold onto was that they weren’t the only ones experiencing a bad day. Kamekona had raised the price on the ice and it created a mob. They destroyed everything and took all the ice anyways. Meanwhile, Junior and Tani had been stuck in the sun all day because someone stole their car when they were responding to a call. And so only Jerry and Lou hadn’t been disappointed.

The heatwave had helped Lou play the best game of golf in his life and Jerry got to see the best of humankind when several people came together to help keep a pregnant woman calm. And when they least expected it, that’s when it finally began to rain.