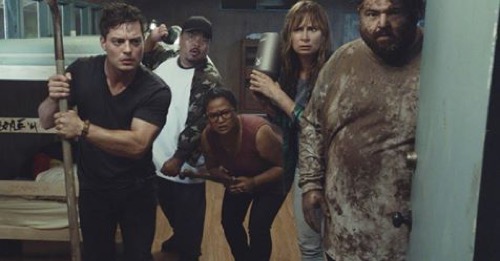 Tonight on CBS Hawaii Five-0 air with an all-new Friday, October 26, 2018, episode and we have your Hawaii Five-0 recap below.  On tonight’s Hawaii Five-0 season 9 episode 5 “A’ohe mea ‘imi a ka maka (Nothing More for the Eyes to Search For),” as per the CBS synopsis, “On Halloween, Jerry and his friends search his childhood camp for evidence to a murder he witnessed as a boy, while McGarrett investigates a little girl who drew pictures depicting the scene of a recent murder before it was discovered.”

Jerry took some of his friends camping because he wanted their help in looking for a body on tonight’s all-new episode of “Hawaii Five-0”.

When Jerry was younger, he used to go to camp every year with his two best friends. They would sneak off into the woods and tell each other ghost stories around the fire. Jerry remembers that one year he needed to pee and had to go further into the woods on his own. He was already scared from the stories and so seeing some dig a hole for a body was something he couldn’t make sense of. Jerry thought that man from the stories had come back to kill again and his friends hadn’t believed him. They thought he just had an overactive imagination and so they got back to the camp every year because it was an opportunity to drink. It was Jerry that took the visit seriously. He and his friends would dig holes and only he was surprised when they never found a body.

The only difference this year was that he took along Eric. Eric had seen Jerry’s dig map and he said that there was one place that Jerry hadn’t checked. It was by the road and near the river, which meant the ground was easy to dig up. Eric said that would be the best place to hide a body and so Jerry said that makes sense because it would be near Bo Bradley’s home. Bradley was this mysterious guy that everyone thought was a killer and there was plenty of ghost stories about him. Eric hadn’t known that Bo Bradley was a real person and so finding that out had freaked him a bit. He began to question if Jerry had been telling the truth and decided to play it safe by reaching out to Noelani.

Noelani later drove up to the campsite with equipment to help them look for a body. It would make things a lot smoother and so Jerry had been happy to see her. Only with Noelani away helping Jerry and Eric, Five-0 were on the own with their latest case. The team was looking into a murder involving a young woman by the name of Karen Miles. She went missing four months ago and it seems she was killed right afterward. She was drugged and tied-up before her killer bludgeoned her to death. What made her case seem off was that there was a little girl who knew how she was buried. This little girl had drawn a picture depicting the scene and her parents had reported it because they thought it was concerning.

Five-0 had tried to speak with little Katie. She said that she didn’t draw the picture and it had actually been Molly. Molly was Katie’s imaginary friend. She showed about a year ago and Katie parents had taken her to the doctor. The doctor had said it was okay for Katie to invent a friend though getting Katie to come out of her imaginary world was harder than they thought. She kept saying it was Molly that drew the picture and that she didn’t know the lady or knew anything about it. The team figured she was traumatized because someone could have told her what happened and so they left to look to into every adult that had contact with Katie. And while they were gone, Katie’s parents finally saw Molly for themselves.

They tried to stop the little girl from fleeing through the window and she bit Katie’s mother. It turns out Molly had been real the whole time and there was a bite wound to prove it. There was a little girl out there who runs from adults and liked climbing in through Katie’s widow yet the team knew nothing about her and the worst part if that they should have known because there was an old case in their files. A man had used a little girl to lure in another redhead and he had drugged her only he hadn’t been able to kidnap her. She fought him off and had run to get help. The team had tracked her down and they had seen how much she looked like the victim. She could be a victim herself and so that turned the team back to Molly’s other drawings. There had been three drawings in all and the team believed that there could be two other victims out there that they hadn’t found. And the one thing they had to help was the crucifix.

There was crucifix found on Karen and it hadn’t been hers. Tani had run DNA she found on the crucifix and it belonged to a woman named Jane Martin. She looked like the victims and was in fact still alive. Jane had gone to rehab and by the time she came out her ex-husband had taken her daughter Molly. Finding out who was Molly, the team decided to track down her father and they found him as well as rescue the little girl. Molly was fine and she was happy to be reunited with her mother. Molly’s father, on the other hand, will be going to jail. It seems he never forgave his ex-wife for leaving him and that’s why he was killing women that acted as surrogates. He even gave these victims his ex-wife’s jewelry to make him feel like he was actually killing Jane Martin. And so the team were able to solve this case without Jerry.

Only Jerry had solved his own case. He had found the bones that belonged to missing teenager Susana Timuro and then the killer had tried him as well as everyone else to cover up the fact they had found the body. But then the oddest thing happened. The real Bo Bradley came and saved them. He shot the killer and the killer turned out to be Jerry’s old camp counselor. Apparently, the guy had forgotten where he buried the body and so he followed Jerry’s group over the years as a way of getting the group to do the work for him.

No one had been happier than Jerry to get justice for Susanna. He was finally done with his thirty-year quest and he befriended Bo who he thanked for saving for everyone.

More than one case was solved on tonight’s Halloween episode yet it was Tani that finally found evidence that Adam killed his sister.

Tani traced Adam’s gun back to Noriko’s murder and now she has to decide whether or not she should arrest Adam for what he did.