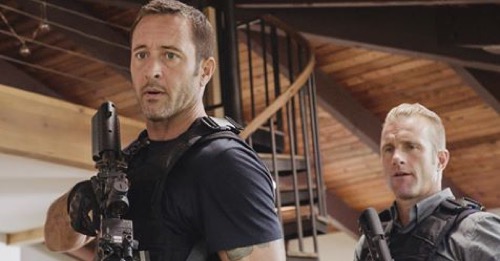 Tonight on CBS Hawaii Five-0 air with an all-new Friday, November 2, 2018, episode and we have your Hawaii Five-0 recap below.  On tonight’s Hawaii Five-0 season 9 episode 6 “Aia i Hi’ikua; i Hi’ialo (Is Borne on the Back; Is Borne in the Arms)” as per the CBS synopsis, “McGarrett crosses the line and is arrested while investigating the death of his former SEAL buddy, who died on an aircraft carrier, and the only survivor is a baby. Also, Adam returns to Oahu with some devastating news about his marriage.”

NCIS Special Agent Emma Warren came to see McGarrett about an old friend of his on tonight’s all new episode of “Hawaii Five-0”.

The friend was Carson Rhodes. He and McGarrett served together and he knew that Rhodes became a private contractor when he left the Navy, but McGarret was informed by the NCIS agent that Rhodes had gotten involved with some sketchy people and that it led to his death. Rhodes was found stabbed to death on a plane with a baby in the backseat. No one knew who this baby was and the working theory is that Rhodes was paid to kidnap a child. The agents in charge of the case still needed to find out who this child was and what happened to its parents and so McGarrett told Warren that there was no need to rush to judgement. He said that there could be thousands of reasons why the child was left with Rhodes and that the parents themselves might be able to clear his friends’ name.

Warren wasn’t sure about that. She repeated that they were still investigating the matter and she said that she would keep McGarrett as much as possible however all she asked in return was that McGarrett leave the investigation to NCIS. They didn’t need Five-0 sticking their nose into their business and McGarrett agreed to back off. He had still gone to see his friend at the Medical Examiner’s office. McGarrett wanted to say goodbye to his friend and as he was making his peace with Rhodes’s death he couldn’t stop Danny from snooping around. Danny had seen Rhodes’s things and he wanted to get a closer look at them. Noelani didn’t need to be told and so she conveniently left the room to the guys. Danny’s curiosity got to McGarrett and he soon found himself going back on his word to Warren.

McGarrett needed to know what happened to his friend and so he opened an investigation. He couldn’t find anything on Rhodes that would explain the baby or his friend’s death. His team also weren’t much help. They knew that Rhodes flew from one of the islands in Hawaii and that was is it. They couldn’t find an amber alert for a three-month-old baby and they had no clue what brought Rhodes to the island. McGarrett got so frustrated with the lack of evidence that he became reckless. He broke into Rhodes’s hotel room and had searched the place despite the police tape asking him not to go in. McGarrett didn’t care that he was breaking the rules. He went into room and he went to the one place he knew Rhodes would hide something. He checked underneath a drawer and removed evidence from a crime scene.

McGarrett hid what he found. So when Agent Warren and her partner came in, they were angry with McGarrett though they understood why he was ignoring their orders and they chose to let him go because they thought they had gotten through to him. McGarrett hid the fact that he found something and that brought it back so that his team could look into it. They found information on a house in Maui and McGarrett had sent some of his people his people to investigate it rather than do it himself because he got into some trouble. Agent Warren found out what he did and arrested McGarrett. He was held in a conference room while his people contacted the governor on his behalf and McGarrett knew that he was going to be there for a while.

While he was in custody, McGarrett asked Danny to check on Adam. Adam came back and wasn’t doing so well. His wife Kona left him and that had been the final thing to push him over the age. Adam was drinking all the time and Tani had found him struggling to remain standing. She told McGarrett what she saw and she left out the part in which she knew that Adam killed his sister. His sister had been evil and would have kept on killing people if someone hadn’t shot her. The fact that the gun that killed her was also found hidden at Adam’s home had been enough to convince Tani. She knew that Adam needed to face what he did and had been scared to tell anyone else besides Junior. Junior told her that if she was truly scared about how McGarrett would react that she could make an anonymous call to HPD.

Tani didn’t know what she was going to do and she didn’t reveal anything to Junior. Junior had called her when he found out that a call had been made and that the police got a search warrant for Adam’s home. As it turns out, the gun had been gone by then and Adam suspected that Tani tried to frame him. He later confronted her because he wanted to know why she would plant a gun on him and she said she hadn’t made that call. Tani admitted that she thought about it and decided not to go through with it because he was a friend. She also said she hadn’t planted the gun. She just put it back where she found it and so now she was just as confused as Adam. Adam swears it wasn’t his gun and he wanted answers. But both Adam and Tani were going to have to wait for the truth and in the meantime McGarrett had help from his friends with clearing Carson Rhodes’s name.

McGarrett was released and he asked Agent Warren to work with him. He said his team had found five bodies outside a house and that it was connected to the case, so Warren decided to work with him instead of against him. They opened a joint investigation and learned that Rhodes had been hired by Lee Burg to find and bring back his wife Julia and son Brandon. The two disappeared one day and the man claimed he was the victim yet the real victim in all of this was Julia and Brandon. Rhodes found them and, after he learned that Lee was abusing Julia and she was afraid for her son, Rhodes decided to help them escape Lee. Only Lee had hired a second team to ensure that his son was returned to him and that’s how everybody died.

Julia was taken hostage, but before she was taken she handed over her son to Rhodes and Rhodes promised to take him to safety. That’s what he was trying to do when he died. The team had been happy to clear his name and they even continued his legacy when they managed to rescue little Brandon from his father again when Lee attempted to kidnap him a second time.

Luckily, Lee was arrested for the part he played in several deaths and his wife will never have to worry about him or keeping her son safe.

So the team finished what Rhodes started.