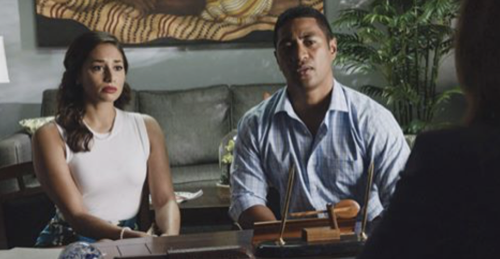 Tonight on CBS Hawaii Five-0 air with an all-new Friday, March 2, 2018, episode and we have your Hawaii Five-0 recap below.  On tonight’s Hawaii Five-0 season 8 episode 16 “O na hoku o ka lani wale no kai ‘ike i kahi o Pae (Only the Stars of Heaven Know Where Pae Is)” as per the CBS synopsis, “Tani and Junior go undercover as prospective parents in order to infiltrate a private school where the headmaster was murdered. Also, Adam’s life is on the line when he is held captive and forced to produce a hidden massive amount of money.”

The team took on a missing person case on tonight’s all-new episode of “Hawaii Five-0” after a headmaster disappeared and no one at his school proved willing to talk.

Headmaster Waller had been a headmaster at one of the prestigious schools that pride themselves on their kids getting into the Ivy Leagues. It was also the sort of school that had rich donors that made up most of their PTA and so no one involved with the school had wanted to court scandal or is around the mere hint of one. They had all just wanted to keep the school out of it and that wasn’t possible. It was clear that the school was somehow involved in why Waller disappeared because his laptop, as well as his briefcase, had been found in his office at the school all untouched and which meant the however way he left it hadn’t been because someone wanted to rob him.

Another very telling piece of evidence had been the nine-millimeter shell that the school janitor found in his vacuum bag and so something clearly happened at that school, but no one was willing to talk to an outsider about it. If they were going to open up then it would be to one of their own and so the team sent two of theirs to act as prospective parents. Junior and Tani were going to act like another rich, snooty couple and they were going to get close to everyone by approaching them as concerned parents. They just couldn’t let their son Noah go to any school when what they wanted for him was the best school.

The two fake parents approached the acting headmaster and they questioned her about Waller. Waller had been part of the school so long that the two pretended they were worried the school would go under without him and so Meech did her best to comfort them. She told them that Waller left for his own reasons and that it might have had something to do with not being so well liked. He was a bit of a taskmaster and had made a few people angry, but he was gone now and so the school didn’t have to worry about his “tantrums”. The woman that was telling them all this had also mentioned how they could better their chances of getting accepted by the school.

She told them that if they went to the fundraiser and made an expensive bid that they would be a shoo-in though that led to a problem for two undercover agents. They needed to run all monetary transactions past their boss and he told them that they could make expensive bids as long as they didn’t win. They, therefore, had to play things very carefully. They went to the fundraiser and spent more time gossiping then they did on bidding, so that led to some results. They learned that some believed the headmaster had been dipping into school funds and that he was possibly having an affair with someone at the school.

They had also learned a few things about their “fellow” parents at the fundraiser and so there had been a downside to the gossip because they didn’t know what to believe. Luckily, their team back at the office had managed to dig something up. They found out that Waller had fired Meech before his disappeared and that she had deleted the paper that led to that after he disappeared. So they brought her in and Meech, of course, swore she was innocent. She said that she hadn’t meant to tamper with evidence and that she had taken his disappearance as a sign from God because it saved her skin.

Meech said she had nothing to do with Waller’s disappearance and it turns out she had been right. She had nothing to do with it because the team received new evidence. They had found Waller’s car and someone had taken great care to drive it far away from the school yet the body hadn’t been in the trunk like they all assumed. The car had been clean. There hadn’t been a body and there hadn’t even been fingerprints which meant the body could still be at the school. And so Five-0 took the cadaver dogs to the school to find evidence.

What they found was the murder weapon. It belonged to Jared Barton who was a parent at the school and it had been found under concrete his company had laid for the school’s new gymnasium. So Five-0 picked up Jared and they found him with a trunk filled with cash that led them to believe they had the right guy. It seems Jared was making a run for it and so the team asked him how he got his hands on so much cash. They told him that they believed he got his hands on it by dipping into the money meant for the school’s gymnasium and so Jared confessed. He told him that they were right about it all. He had stolen the money, he had killed Waller after Waller found out what he did, and that his company wasn’t real.

Jared Barton had been using his company as a front to launder money for the cartel and so he had taken that money because he was going to fake his own death to protect his family. His family was his chief concern and so Jared was willing to do anything even testify against the cartel if the police could keep his family safe. But before Five-0 could make it to his family, his family had gotten kidnapped by the cartel and so the team needed to release him in order to get close enough to his family to rescue them. The family was safe as long as Jared showed himself and so he went to the meeting they had arranged.

Only the cartel was never going to release his family. They had called him to a meeting because they planned on killing his family in front of him and so Five-0 had to move in before they were ready. They were able to take out the guys on the ground and the one problem they had was the guy that had his gun trained on the Bartons yet Junior had gotten the shot and so he took it. He took out the guy and freed the family. So McGarrett finally got the chance to have a conversation with Jared about his confession. Jared said that it was all him and it turns out it had been his wife. She had killed the headmaster and she was the one making a deal with the cartel to use her husband’s company.

Jared was just willing to do time for it all because he didn’t want his wife to go to jail and because he knew McGarrett couldn’t prove his theory.

So Jared’s wife got away with her crime …

…And McGarrett later picked up a badly beaten Adam who was now on the hook for twenty million because Michelle Shioma somehow convinced the new crime boss on the block that he was good for it.