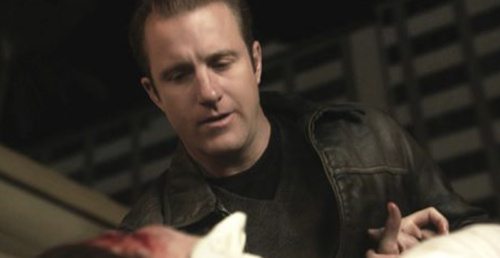 Tonight on CBS Hawaii Five-0 air with an all-new Friday, March 30, 2018, episode and we have your Hawaii Five-0 recap below.  On tonight’s Hawaii Five-0 season 8 episode 18 “E ho’oko kuleana (To Do One’s Duty)” as per the CBS synopsis, “The ex-wife of the man who shot Danny comes to Oahu and reveals how Danny’s protection during a dangerous domestic dispute when he was in New Jersey helped save her life. Also, Tani and Junior are assigned to walk the beat as uniformed officers for the day, and Adam is framed for the murder of the crime boss he has been tracking.”

Adam was pulled over on tonight’s episode of “Hawaii Five-0” when HPD received an anonymous tip that there was a body in the trunk of Adam’s car.

Unfortunately, this tip panned out. Adam was pulled over and there had been a body that was later identified as Hideki Tashiro. Tashiro was the same man that Adam was investigating and so that caused a lot of problems because Adam was given leave to create a secret task force within Five-0 however not a lot of people knew about it. The FBI for one still believed that Adam has still involved in organized crime himself and so finding a body in Adam’s possession had been enough for them. They had wanted to charge Adam with murder and they weren’t willing to listen to reason. Like how Adam had been cleared by McGarrett in his own enemy’s death and that he was in the middle of finding investigating what had happened all those weeks ago.

Some time ago there had been a hit out on all of the crimes bosses on the island. They had all get wiped out and so Adam tried to tell the FBI that it had been his job to investigate why Tashiro had been spared. He told them that he suspected Tashiro was working with someone to take out the competition and that he had recruited someone to join Tashiro’s crew as an informant, but the FBI still saw Adam as his father’s son and so they weren’t willing to listen to him to explain how he was on their side. He was the one investigating this new threat to the island and that meant he was also looking into what happened to that former FBI agent. There had been an agent who intended to clean up the island and he had been murdered alongside his family.

The FBI had questioned Adam about that hit when it happened and he had been cleared then yet they were taking what happened to one of their own quite personally and so they weren’t all that interested in Adam’s story because they thought it was just that. A story. They asked Adam to prove what he said by telling them about his informant and he refused to give them Jesse’s name. He didn’t know if he could trust her or if she had been part of the plan to set him up and therefore he could have given her if he wanted to. Adam just hadn’t wanted to bring her into something that could compromise her and he chose to instead rely on McGarrett. McGarrett had told Adam that they’ll find whoever set him up and, while Adam was in FBI custody, he was finding Jesse.

Jesse had revealed to Adam that she was sleeping with one of Tashiro’s lieutenants and so McGarrett had every reason to believe she could have been compromised through what seemed to seal the deal had been the fact she ran. She ran when she saw the cops looking for her and McGarrett had had to track down by nearly crashing his own car, but when they did eventually catch up to her, Jesse had no idea what they were talking about. She told them that she ran when she found Tashiro’s trailer with blood everywhere and had also learned that the man she was sleeping was had also been killed. She explained that it didn’t take a genius to figure out that she would be next and so that’s why she ran.

Jesse claimed to have never heard anything about Adam or what happened to him and so she proved to be willing to help clear his name. She took Five-0 to Tashiro’s hidden trailer and it wasn’t there anymore because someone had moved it, however, satellite imaging showed that the trailer was there and had even given them a lead on who took it. It was taken by someone dumb enough to leave his logo on his car and so they tracked back down to a shed where it was being cleaned by a specific kind of cleaners. These cleaners were being paid by the Yakuza to erase the crime scene and they had tried to shoot at Five-0. And so Five-0 had tried to take them into custody alive only they hadn’t been able to get a witness and had to use other means to get Adam out of jail. They pointed out that Adam couldn’t have killed Tashiro if the crime scene was being erased while he was still arrested, so that had been enough to get him released.

Though McGarrett had had a few things to tell Adam. He told him that Jesse hadn’t sold him out and that they had both been wrong about her only he did find something that he thought Adam should know. Adam, as it turns out, has a half-sister. Her DNA was the only one found out at the crime scene besides Tashiro and so she was somehow involved in what was going on in organized crime yet Adam didn’t know about her or know what she looked like while it seems she had been studying him. He was made by her organization and she had tried to set him up for murder.

And while Danny hadn’t known why someone had tried to kill him, he later remembered the man as someone he put in jail for beating up his wife and that he had had a thing with the wife before they both decided to end it.

It turns out the guy never let go of his hatred and had tried to blame Danny for breaking up his marriage.