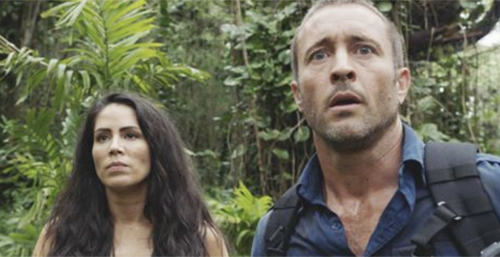 Tonight on CBS Hawaii Five-0 air with an all-new Friday, April 13, 2018, episode and we have your Hawaii Five-0 recap below.  On tonight’s Hawaii Five-0 season 8 episode 20 “He lokomaika’i ka manu o Kaiona” as per the CBS synopsis, “Catherine Rollins recruits McGarrett and Jerry to help her track down a uranium deposit thought to be hidden on an abandoned Hawaiian island before a suspected terrorist can make dirty bombs with it. Also, when Junior falls and is trapped in a ravine, he reflects on his estranged relationship with his father.”

Adam told McGarrett he was out on tonight’s all-new episode of “Hawaii Five-0” because he had finally had enough.

Adam had headed the secret task force into organized crime. He had recruited a young woman fresh out of prison and had put her in harm’s way because he needed someone to be his eyes as well as his ears in the last remaining Yakuza on the island, but Adam hadn’t known what he was dealing with. He later found out his secret half-sister had been behind the latest murders and there was some cunning to her. She had had the FBI on her payroll and hadn’t revealed herself to anyone until she had no other choice. This woman had even been so cunning that she managed to get her hands on Adam’s money despite everyone she had to go through. And unfortunately one of the people she had to go through was Adam’s recruit, Jesse.

Jesse had stolen the money from Adam because she had gotten scared. She realized the mission could get her killed and had wanted to use that money to get as far away from organized crime as possible however Jesse never made it off the island. She was found murdered in her car and the money had been missing from her truck. It seems Adam’s sister had gotten her hands on it and the means in which she did had hurt Adam. Adam had genuinely cared about Jesse’s safety and the fact she died had been enough for him to give up. He later told McGarrett that he was out. Adam didn’t want to run the secret task force and had wanted to get away from everything involving his sister because he now knew how dangerous she was.

Except Adam quitting had been a blow for McGarrett. McGarrett didn’t have anyone else that could fill Adam’s shoes because Adam had grown up in the life. He had been raised in the Yakuza and knew how to handle himself better than anyone else in Five-0. Adam was the one everyone needed to head his unit within a unit and no one could convince him to stay on the team much less stay on the island. He had wanted to go be with his wife and nothing McGarrett or Tani could say would convince him to change his mind. Adam said the only thing Noriko deserved was death and so he told everyone that its best he left if he was going to think like that. And while the team knew they were going to miss Adam, they eventually had to let the matter drop.

Five-0 had been approached by their old friend and McGarrett’s ex Catherine. Catherine worked for the CIA and she was on the hunt for a known terrorist. This terrorist had had an artifact in his possession that belonged to a king that was allegedly buried in Hawaii and this artifact was covered in traces of depleted uranium. The same kind that would be found on old military bases that were abandoned in Hawaii and so when Catherine found the artifact though not the terrorist she knew that she needed to head back to the island. She could have chosen one of her many assets available to her or the CIA and instead she decided to go to Five-0 for assistance. Catherine told McGarrett that no one knew the island like he did and she had been right.

McGarrett had gone with Catherine to talk to the military presence on the island and it turned out McGarrett knew more than their designated personnel. He knew for instance that there was an island was once used by the Navy and so that island could reasonable still have depleted uranium on it, so McGarrett decided to visit the island with Catherine. Jerry was just an unfortunate addition. Jerry claimed to have once hunted on the island with his uncle and he said he knew the island better than anyone. He also wanted to go to the island because he heard about the ancient king’s burial and had wanted to live out his Indiana Jones fantasy. Jerry had pleaded with McGarrett so much that Catherine had taken pity on him and had allowed him to come along.

It didn’t come out until they were on the island and had seen the danger signs that Jerry revealed he lied. He had never been on the island and he had never gone hunting with his uncle. His uncle used to play video games with him and so McGarrett had been “displeased” with Jerry. Jerry had lied and that meant their little team didn’t have a guide to help them around the island. Only Catherine thought it would still be ok because she knew that she and McGarrett didn’t need much help. They could navigate the island on their own and so they walked up ahead of Jerry. Jerry had bene so far behind the other two that he decided to take a moment to rest seeing as no one could see that he needed that moment to rest and taking a breather stopped him from seeing all the action.

A couple of thieves had surprised Catherine and McGarrett and had stolen all of their gear. That included the satellite phone and so the two had been left without supplies until Jerry caught up with them. He was supposed to have supplies on him and he hadn’t enough. Jerry hadn’t had water on him and Catherine had had to climb up a tree to get coconuts to quench their thirsts. Then, when they were finally had the time to sit down and were going over their plans they heard gunshots. The trio had followed the gunshots to an abandoned bunker where they saw the guys that robbed as well as few others all wearing masks. The team had waited to gun fire had calm down to move and when they did they had a problem with of the gunmen.

This one guy managed to get away from him and they hadn’t known it was a problem until they checked out what was in that bunker. The bunker was acting as a supply center. The gunmen had been using up all of the uranium to create dirty bombs and the one guy that got away had carried of those bombs. So Catherine and McGarrett went after their guy and Jerry continued to look for the mystical artifacts. He later found them deeper into the bunker and had almost caused a fire that would have set off the bombs. Thankfully, Jerry used the sand on the scene to stomp out fire and hadn’t been in much danger. The others just happened to be different because they chased their guy until he tripped and fell on his own bomb.

With their only lead accidentally killing himself, Catherine had though she lost any chance she had at finding her terrorist and so it proved to be a good thing there was a phone back at the bunker. She used that to find her guy and had set a team after him to collect him, but she had the only good news out of the whole thing. The artifacts in that bunker had proved to be fake and Jerry had lost out on his moment in the sun. He was still in a grumpy mood when Catherine took them out to dinner and he as well as the others got to see Junior was safe. Their friend had fallen into a cave and had injured himself while he was on his run, so Eddie the dog had had to get Tani and Tani remembered where Junior liked to run.

Junior still came away from the experience with an injured ankle and not that surprised he hadn’t let that stop him from going out with his friends. They had all gone out to celebrate stopping a potential terrorist attack and had even talked Adam into celebrating with them before he left the island to see his wife yet McGarrett later learned that Adam’s sister had been killed and so that now has him looking at Adam funny.