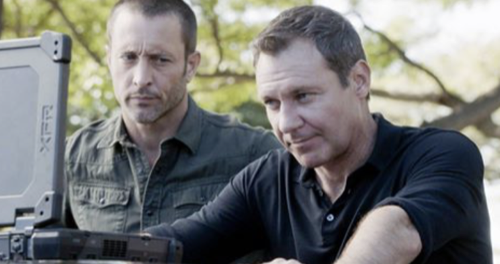 Tonight on CBS Hawaii Five-0 air with an all-new Friday, April 20, 2018, episode and we have your Hawaii Five-0 recap below.  On tonight’s Hawaii Five-0 season 8 episode 21 “Ahuwale ka nane huna (The Answer to the Riddle is Seen)” as per the CBS synopsis, “Harry Langford enlists McGarrett and Danny’s help to track down Lady Sophie, a teenage British royal who has run away while under his protection. Also, Grover, Tani and Junior work a 25-year-old murder case after a mysterious Betamax tape arrives at 5-0 headquarters.”

McGarrett and Danny both loved it when Harry Langford returned to the island. He was great fun and had always seemed to be the life of the party however Harry wasn’t in much of a party mood for this visit. He sort of agreed to work on his holiday. Harry had known the Mortimer family for years and he used to work security for them. He told McGarrett and Dany that working for the family was how he met both Lady Helen and Lady Sophie. Sophie was a kid when Harry last saw her and unfortunately she grew up to be a rebellious teenager. She was constantly in trouble and the media followed her every move just to catch how much trouble she was getting in, so her mother reached out to Harry.

Harry was asked to keep an eye on Sophie and he agreed to do it despite how much of a pain the Sophie turned out to be. The young woman invited herself to Harry’s lunch with his friends and she informed them that she had wanted to do some shopping before they eat. Sophie said she needed a new outfit and so the guys forced themselves to sit through the many outfit changes. They eventually had had enough and told her what outfit they proved of, but then Sophie went into the changing room and never came back out. She had found a way to escape and had taken it all without telling anyone. So the boys got worried. They tried finding her by following the car she had booked and had later fount out it was a decoy.

Sophie was an intelligent teenager and she put that intelligence to use. She had snuck away because she had wanted to be witht the guy she just met. Sophie had tried to hide that by wiping her social media account and so the boys learned about this boyfriend when they called Sophie’s best friend Carlotta. Carlotta had also been a pain and at one point she forced Harry to snap. He called her a “puffed-up trollop” and had demanded answer from her, which of course hadn’t worked. She hadn’t wanted to tell him anything and so it had been Five-0 that got her to talk. They managed to talk her out of the best friend code and she revealed that there was a secret boyfriend. She even had a picture of him that Sophie sent her.

When the boys got the picture, they tried looking for him and had called upon on whatever resources the could get in order to find Lady Sophie Mortimer. She was technically a royal because she was thirty-five people away from the throne and someone with dangerous intentions could easily target her. Harry was worried about that and so he looked into this boyfriend. The boyfriend didn’t have a criminal footprint and Danny had had to find him using social media. Danny was familiar with stalking people through social media because that’s how he spies on his own teenage daughter and that meant he quickly found Travis Lynch. He was a party boy that liked taking pictures and he was taking a lot of photos of himself at the Muse Beach Club.

The boys found Travis in a cabana and he hadn’t been with Sophie. Sophie proved to be a little too wild for Travis. He said he was hanging with Sophie because they met through a dating app and they had been having fun until he left her alone for a few minutes. Travis said he went to get a drink and when he came back he found Sophie in another guy’s lap. She had been so into the party that she hadn’t cared who she was partying with and Travis had tried to shrug that off by partying with another girl. He told the boys that the whole thing hadn’t mattered to him when it clearly seemed like he did and so Harry pushed Travis into telling them the rest because he knew Travis kept an eye on Sophie. And he was right! Travis told them he saw Sophie leave with two blondes.

That was all Travis knew and so Harry tried to find someone else that could help. He spotted a photographer at the scene and remembered he was part of the paparazzi following Sophie, so he grabbed the man’s camera. It had several pictures of Sophie partying and there had also been a photo of her leaving with the two blondes. The photo had showed what car they got into and so Harry used that to track down the car. He also erased the pictures while he was at it and he went off with two members of Five-0 to find this missing, but the rest of Five-0 was working on a cold case. The team was sent a video and had handed it over to Tani and Junior. The two most junior members were tasked with this because everyone figured they had nothing else to do and so they saw for themselves why someone sent in the tape.

The tape started out as someone recording two people having sex and it turned out to be a murder. The couple in the tape had gotten into some argument and the argument had gotten so bad that this man in the video turned on his partner. He began to strangle her and went on to kill her all while someone watched. The guy watching was clearly a peeping tom and the video was twenty years old. Tani and Junior had taken the video to Lou and together they found who the victim was. Her name was Lara Levy and she had a roommate that reported her missing. The roommate said Lara had this mysterious boyfriend that she didn’t like talking about and the last time the roommate saw Lara was when she went to this secret boyfriend, so the team looked into who took the video.

It was hard work and they found out the man that took the video worked at this hotel where he would spy on people from the ceilings. He was now in coma and it had been his wife that dropped off the video. She learned what her husband and had wanted to come forward yet he wouldn’t allow her to because he hadn’t wanted anyone to find out about his hobby. It wasn’t until he was in no position to beat his wife for what he did that she sent the video and she later handed over all of the videos. The team saw Lara in several of them and eventually found out her secret boyfriend had been a married pilot. He told her that her that he was going to leave his wife and just never did, which is why she had gotten angry with him.

Lara had demanded more and her boyfriend killed her for it. So when the team eventually found and arrested him, he told her where her body was and she finally got justice. She had had only a roommate that cared about what happened and the roommate hadn’t even fought for her because life moved on for the roommate. It hadn’t for Lara and so Tani had taken this case to heart because she thought it unfair that no one had cared. Tani had talked about it to Lou and Lou had helped her adjust. He told her that sometimes they don’t always catch their guy and that it was unfortunately part of the job.

Meanwhile, McGarrett and Danny helped Harry rescued Sophie. She had gone with two girls that she hadn’t known and they handed her over to human traffickers. These traffickers were going to sell her at the highest bidding and so it was good things when her real father arrived to rescue her. Harry had gotten Sophie out of there and he had returned her to her mother though he hadn’t ever told her that he was her father. He had been with Helen for such a short time that he had done as she suggested and walked away when she returned to her husband. Harry later told the guys that it had been hard for him to walk away and that he would tell Sophie the truth if she ever asks. And that he was just a family friend until then.