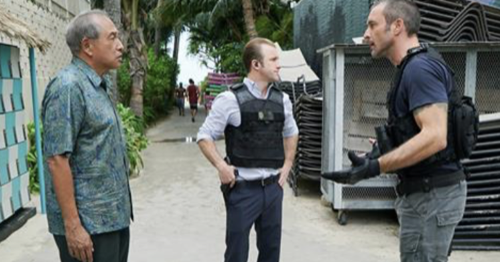 Tonight on CBS Hawaii Five-0 air with an all-new Friday, April 20, 2018, episode and we have your Hawaii Five-0 recap below.  On tonight’s Hawaii Five-0 season 8 episode 22 “Kopi wale no i ka i’a a ‘eu no ka ilo. (Though the Fish is Well Salted, the Maggots Crawl.)” as per the CBS synopsis, “Five-0 must help Duke after he is forced to steal crucial evidence from the police locker in exchange for his kidnapped granddaughter. Also, Jerry goes undercover at a mental health facility in order to solve a murder.”

Jerry had always wanted the chance to prove himself. He had joined Five-0 because he wanted to get out into the field and do his part like everyone else, however, the team hasn’t used Jerry as much he thought they would. They thought he was better suited at the office and had wanted to leave him there until Jerry volunteered for this case. The team was investigating the death of Ben Pollard. Pollard had been a long-term resident at Kaneohe Psychiatric Hospital and he had been found dead in a ravine. The hospital staff had all claimed that he must have wandered off and that was odd because Pollard had been there for years without leaving the institution, so it made little sense why that would suddenly change or why someone wanted Pollard dead.

Pollard had smashed cranium that wasn’t caused post-mortem much less in the water. Someone hit him from behind and then threw his body into a ravine in an attempt to cover up what they did but the hospital claimed that no one wanted to hurt Pollard and they all fell in line on the same story. They weren’t talking and so the team had needed to send someone to investigate the matter from the inside. The team was told that this undercover assignment could last for a while and no one had wanted to be away from the “real action” just to work at a hospital, except Jerry had no problem with accepting the job. He figured this would be the way to prove himself and so he went to work at Kaneohe Psychiatric Hospital as Hector.

Jerry pretended that the boss wanted someone to box up Pollard’s room and had volunteered when the woman that normally would handle it was busy having her lunch break. She had given him her second sandwich and he had boxed up Pollard’s room though there hadn’t been much there and so the only thing Jerry found interesting had been one of those clocks used during chess. Jerry figured Pollard must have been playing someone and so he got the name of his chess partner from the front desk. He found out Harris Stubman was spent the most time with Pollard and therefore Jerry questioned Stubman over a game of chess. The two played a few games together and Stubman revealed that Pollard got into a fight when he tried to change the channel.

The only television the patients got to watch was in the rec room and Jerry went there because he figured he could smoke out the person that had a problem with Pollard. Pollard changed the channel and so did Jerry. He turned it to a game show and another patient named Chad quickly changed the channel back. Chad told Jerry to never change the channel and had leaned on Chad because he could see Chad was upset. Chad, as it turns out, was turning back the channel because he was afraid of Kosaki. Kosaki was another patient and he had gotten into a brawl with Pollard that the orderlies had to break up and not long after that Pollard died. So it didn’t take a genius to put that together and Chad knew that it was safer not to upset Kosaki even if it was over what they watched on tv. And so Jerry decided to look into it.

Jerry grabbed Kosaki’s file and found out he wasn’t really Chris Kosaki. He was actually Dylan Shu who was wanted by the FBI and was hiding out in a psychiatric hospital as cover. When Jerry figured who he was, he called the office to report in and hadn’t been able to get McGarrett. McGarrett was out looking for Duke who went rogue for some reason and attacked another officer before disappearing. Which hadn’t sounded like Duke his friend knew and so McGarrett looked into what could have pushed Duke into doing what he did. Duke had been acting just fine until he had gotten a call from his daughter and so McGarrett brought in Duke’s daughter, Carrie. Carrie had been nervous and hadn’t wanted to talk however McGarrett told her that he could help and so Carrie told him that her daughter Akela had been kidnapped.

The little girl had been snatched from her phone and Carrie called her father Duke. Duke had been instructed to wait for the burner phone and it wasn’t until after he got it that he knocked out a fellow officer. The other officer happened to be in charge of the evidence room and Duke had grabbed something before he left. The team used surveillance footage to catch up with Duke and Duke revealed that he had been told to grab a key and that the key would lead to a locker he had to open. But not long after he opened the locker, someone had grabbed the bag inside and had locked Duke in the trunk of a car. Duke admitted that he told someone about the bag at the locker and so that’s how someone got the drop on him.

Thankfully, Five-0 was able to get that bag back and then meet with the kidnappers for the exchange. In a not so surprising move, the kidnappers had wanted the cash before they did anything and had shot Duke when he persisted. It was right about then that the team decided to stop playing by the kidnappers’ rules and chose to move in. They got the kidnappers, got to a badly injured Duke, and they rescued Akela. The little girl was fine and the team didn’t believe HPD would fire Duke because he had been acting under extreme circumstances although they figured there would be consequences. And so by the time Jerry was going to get their full resources, they learned he handled the situation by himself.

Jerry had gotten kidnapped by Shu and Shu’s partner who had been hiding as an orderly, so he crashed the vehicle they were in and knocked them out.

Jerry had suffered some minor bruising however he had been relatively okay in the end and he had even found the time to flirt with the orderly that shared her sandwich.