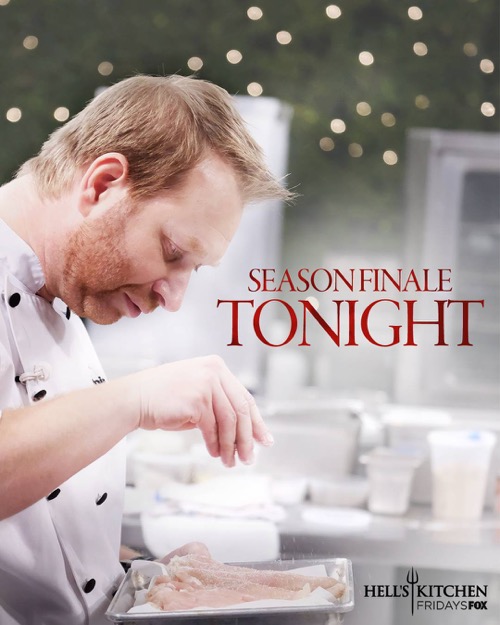 Tonight on FOX their Gordon Ramsay culinary competition series Hell’s Kitchen airs with an all-new Friday, February 2, 2018, season 17 episode 15 and we have your Hell’s Kitchen recap below. On tonight’s Hell’s Kitchen season 17 episode 15 episode called, “The Season 17 finale. Chef Ramsay informs the remaining three all-stars that all of them will compete in the finale. As a reward, Ramsay invites the contestants to a retreat at Calamigos Ranch in Malibu. However, the vacation soon turns upside-down when Ramsay announces their last challenge. The three finalists must cook and perfect their menus and only two will advance. Then, the final two All-Stars pick from the season’s past contestants to join them on their team for the final dinner service.”

The following morning, the chefs are given just one hour to prepare a tasting menu for Chef Ramsay. Michelle is the first to present her dishes. Her cold appetizer is a Hamachi Crudo. The second dish is a Uni risotto. Her third dish is a squid ink and Seabass. Her fourth dish is crispy chicken thigh, that he was really impressed with. Her last course was a Miso NY Strip. He has no complaints about any of her dishes, saying they ooze personality and tells Nick and Benjamin they definitely have their work cut out for them.

Benjamin’s first dish is Ahi Tuna and caviar. The second dish was shrimp and grits. The third dish is sea bass. The fourth dish is airline chicken, that looked spectacular. The final dish is filet mignon served with truffle potatoes. Chef Ramsay says it screams decadence and screams Vegas and near perfect.

Nick comes last, there is an incredible balance of colors, like a rainbow. His first dish is a beef carpaccio. The second dish is a cranberry hollandaise with seared bay scallops. The third dish is tri-color baby carrots, seared halibut. The fourth dish is crispy chicken with sweet potatoes puree. Chef Ramsay says it is frigging delicious. The last dish is espresso and chili-dusted venison loin. Chef Ramsay says the flavors are mind-blowing.

Chef Ramsay goes up to his office and calls the Sou Chefs upstairs, saying he this is very hard. He returns, saying it was a difficult decision but he has made it. The first person heading into the grand finale is all three of them! He said he went upstairs and made a very important call and sending all three of them on a retreat to Malibu wine country, where tonight they will be hosting the 7th annual California Culinary Association Award Ceremony, and they will be accompanying Chef Ramsay to the ceremony.

Michelle, Nick, and Benjamin head off in a limo to Malibu, California where they arrive at the Calamigos Ranch. Benjamin and Nick are getting their face and nails done; meanwhile, Michelle prefers to be in a kitchen rather than all dressed up, but she is trying to enjoy herself.

Chef Ramsay meets them outside the venue, where they get some photos taken on the red carpet and he is surprised some of them have never been to any award ceremonies. Chef Gordon Ramsay is called to the stage, and he calls Michelle, Benjamin, and Nick to the stage, where he reveals there is no such thing as a CCA. He says all the people are here for the start of their final challenge and the top two finishes for tonight are tomorrow night’s finalists. This morning’s dishes were a warm up and they will be cooking the same dishes, right here in front of the crowd; they have 60 minutes to perfect the dishes.

When the 60 minutes are up, Chef Ramsay says that the top dishes will not be decided by him. They have five incredible judges from the Executives in the Caesar Entertainment Group. Sean McBurney, General Manager, Caesars Palace is judging Round 1 of cold appetizers. Michelle (9) Benjamin (8). Nick (8).

Round 4 is chicken entree dishes, judged by the global president of Caesars Entertainment. Michelle (8). Nick (9). Benjamin (9).

The first person heading into the finale is Michelle. The second person joining Michelle in the grand finale is Benjamin.

The All-Star chefs return to join in the kitchens for the grand finale. Michelle immediately picks Nick. Benjamin chooses Jennifer. Michelle picks Dana. Benjamin picks Van. Michelle chooses Milly. Benjamin takes Robyn. Michelle is stuck between a rock and a hard place as its only Elise and Barbie left standing. She picks Elise. Elise says she wishes Benjamin would have picked her because she would have given him 210%.

Michelle is trying to make things as easy as possible for her team but Elise really doesn’t want to be there. She isn’t communicating with anyone, she is acting like a sore loser and everyone is worried that Elise is going to be an issue during dinner service. Benjamin is feeling good about his team.

The following morning, Michelle encourages her team to be happy and have a positive attitude but Elise is just being rude. Robyn promises to be there completely for Benjamin, today is a new day and it is all about him. Benjamin has the strategy to be calm and respectful to his team.

Michelle feels that Nick is his right-hand man, but is concerned about Elise. When Elise continues to disrespect Michelle; Nick finally tells Elise to shut up and if she doesn’t like it to get out of the kitchen. Dinner service hasn’t even started and hell is already happening in the kitchen. Robyn notices and laughs that the red kitchen is already falling apart.

Michelle and Benjamin ask Marino to open Hell’s Kitchen. VIP guests arrive like Lamorne Morris, Actor from New Girl. Right away, Michelle’s appetizer’s are flying out of the kitchen, but the blue kitchen is warned by Chef Ramsay that this may be Benjamin’s menu but they are still running by Ramsay’s standards. Benjamin is making sure Jennifer is keeping up with the seasoning.

But now in the red kitchen, Michelle has pulled off the pass and has to show Dana how to create a dish. Chef Ramsay gets angry when they are slowed down completely and he pulls Michelle into the pantry, saying they are in trouble because they stalled on a cold appetizer – something they don’t even have to cook! Elise laughs as she runs after him to the back room. He tells her this is the most important dinner service of her life and he needs to hear her voice.

Food is flowing out of both the kitchens now and getting very important stamps of approval. Barbie has only worked on hot apps once, and she feels she should have told him as he is the only one who has ever treated her with respect. Barbie works hard to make the dishes and hopes that Benjamin wins.

A risotto comes back from the dining room, with too much broth in it. Elise quickly makes another two bowls and Michelle thanks her. Milly comments on Michelle being a true leader, begin able to cope with Elise and her attitude.

Benjamin continues to compliment his team, not yelling at them and when they make a mistake, encourages them to quickly correct it without being mean. Jennifer is in the weeds as she serves him raw fish. She refires it but serves him raw fish again. Chef Ramsay tells him that the kitchen is falling apart because the other meat is going to having to be tossed and another order cooked because of Jennifer’s mistake.

Michelle is too busy to read tickets, so she asks Nick to read them. He reads off 9 entrees and Chef Ramsay stops him, saying there is no 9-top in the restaurant. Elise begins laughing. Michelle says Nick made a mistake, they can bounce back.

In the blue kitchen, Robyn sends up raw meat and Van calls her “cray-cray.” Chef Ramsay tells Benjamin to check the filets because they look charred; he looks at the pan and they are burnt. Marino walks over and asks how long for table 1 and Robyn says she needs 5 minutes for the meat. Chef Ramsay calls Benjamin over as Van says this is the wrong dinner service to be screwing up as this is the finale of All-Stars.

Robyn is about to bring the beef up again and Ramsay asks her to touch it, she already knows it is under and he confronts her about sabotaging Benjamin; she swears she isn’t screwing him and isn’t answering any more questions. Benjamin feels he couldn’t yell at Robyn because she would implode.

Michelle talks to her team, working her absolute hardest to make sure her kitchen stays in order; encouraging them to keep the momentum going. She wants to finish strong. In the blue kitchen, Robyn came up with perfect beef but now the lamb is cold. Benjamin tells her to refire and just get it together but Chef Ramsay asks her if she has given up. He then calls her to him asking her if she just put the lamb into the pan where the beef just came out of; she says she did because the pan was hot.

Both teams work hard to finish the last tickets and Chef Ramsay says both teams had some hurdles but both Michelle and Benjamin pushed through it. He has the comment cards in his hands, tells them to say goodbye to their brigades and head back to the dorms and he will call them when he has made his decision.

Benjamin and Michelle go up to Chef Gordon Ramsay’s office as he tells them he put a lot of thought into what he observed not just from tonight but from the moment they met. His decision tonight was very difficult but he has reached his decision and they stand in front of their doors. Michelle Tribble becomes the Head Chef of the Flagship Hell’s Kitchen Restaurant in Caesars Palace in Las Vegas!