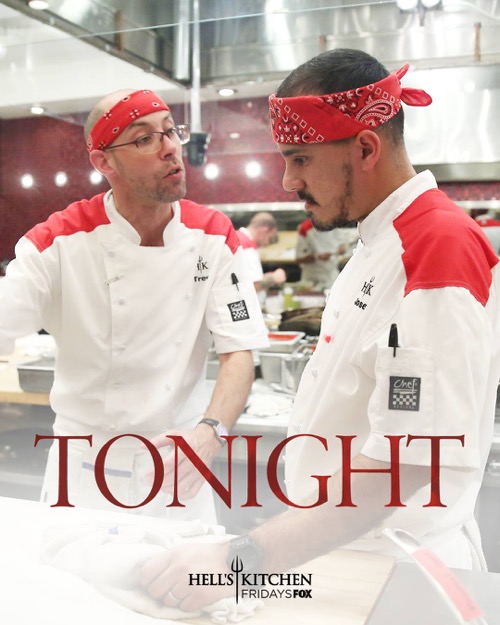 Tonight on FOX their Gordon Ramsay culinary competition series Hell’s Kitchen airs with an all-new Friday, December 7, 2018, season 18 episode 8 and we have your Hell’s Kitchen recap below. On tonight’s Hell’s Kitchen season 18 episode 8 episode called, “One Hell of a Party,” as per the FOX synopsis, “The final 10 chefs are surprised when Chef Ramsay brings in his daughter, Tilly, to celebrate her Sweet 16. During the challenge, each chef is tasked with creating a worthy dish to be served at Tilly’s party.

The team that gets the most dishes on her menu wins the challenge. While the winners enjoy time at the Malibu mansion, a member of the losing team requires medical attention after the pressure becomes too much. Meanwhile, a fan-favorite veteran winds up on the chopping block”

Lots of stress among the chefs, Trev is tired of Scotley. Bret is ticking of Mia, he tells her not to be offended, she tells him that he should want to improve himself and talk better.

Gordon congratulates the chefs on being in the top ten. Then he asks them to close their eyes and think about when they were young and first fell in love with cooking. They open their eyes and first they see a photo of much younger Kanae, Trev, and all the others, including the sous chefs. Marino brings out a photo of a much younger chef Ramsay. Gordon introduces his daughter Tilly. For the next challenge the chefs will be creating dishes for Tilly’s 16th birthday party. The team that wins, meaning the dishes she likes the most, will win the competition.

The woman love the villa, it’s insane. An ice cream truck visits the women and they all indulge. The ladies are truly enjoying a carefree day by the beach.

Brett is frustrated at decorating and all of a sudden his heart starts beating fast, his arms start sweating – Jose wants him to call the medic. A medic checks Brett and tells him they are going to call 911 and put him on a monitor. The ambulance wants to take him to a hospital, he refuses treatment and returns to the kitchen. Both teams are back, the dining room looks incredible. Chef Gordon tells them that a 16th birthday is a night to remember and he wants a smooth service. At the end of the evening, he wants to be happy.

The doors open and all the guests arrive. Kanae gets in trouble from the start, she is tearing apart the tuna when she is cutting it. Scotley and the Red Team are riding high. Roe serves up raw steak, and is trying to redeem herself, he calls Roe down on her second attempt and shows her that the steak is rare. This is the worst time for Roe to make a mistake. Bret serves up sweet potato fries and there are burn bits in them. Mia serves up raw fish, chef Ramsay can’t believe that it is ice cold inside. Scotley tells Trev he has too much garlic in the garnish, but he won’t listen to him; chef sends it back. Chef Ramsay is lost for words, Ariel served up cold fish. Chef Ramsay throws out the Blue Team and tells them off. The Red Team’s talented Rookie’s take over and complete the service.

Mia is crying, she can’t believe they let chef Ramsay down on his daughter’s birthday. The Blue Team get into an argument about which two chefs to put up, nobody wants to own up to their mistakes.

Time for the ladies to reach a decision. They have decided to put up Roe and Mia. Chef Ramsay tells Mia to get back in line, Roe is sent home, here performance doesn’t show chef that she is ready to be his head chef of one of his restaurants.