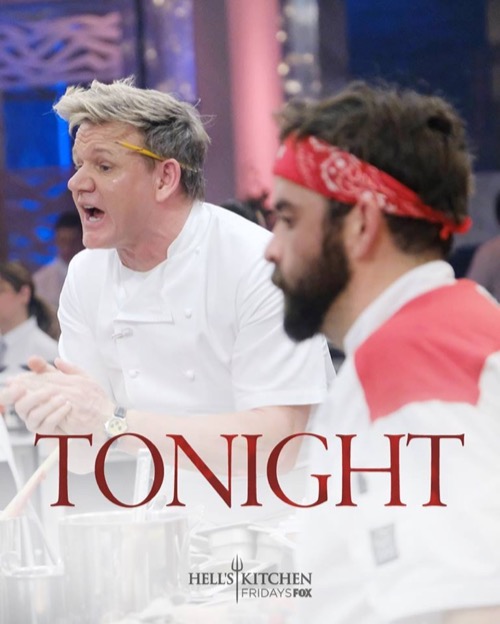 Ramsay invites renowned chef Shirley Chung to judge each dish and the winning team is rewarded with a VIP trip to Las Vegas. During dinner service, tensions rise as one team struggles to work together, resulting in a kitchen riddled with errors.”

The Blue Team went through a brutal elimination. They were all busy pointing fingers at each other that they lost sight of the fact that they are coworkers. It wouldn’t matter what they felt about each other because at the end of the day they still had to work together. Ariel was the first to remind everyone that they needed to come together if they wanted to win, but she also admitted in her confessional that she liked the friction. She said that it would be easier to defeat the others if they were all focusing on the wrong enemy and so she was playing the long game. And the only that recognize what a threat Ariel was were the guys over on the Red Team.

The next morning both teams were called outside and greeted by Chef Ramsay. Ramsay informed them that their following challenge was going to be something new and different. He told them that they were going to be cooking Chinese. The contestants had all celebrated that they were going to be cooking Chinese food that some even thought it was easy. They paired off this challenge with each contestant on the Blue Team competing against someone on the Red Team however there weren’t enough women to go up against the guys and so person volunteered to cook two meals. Kanae had wanted to prove herself and so she decided to cook both the Chicken and the Prawns.

Only Prawns were still alive. They were all moving around and stuff that it freaked out Kanae some and she ended up taking help wherever she could find it. In all honesty, most of them had turned to someone on their team for this challenge and that didn’t always work. Chef Ramsay had invited a famous chef to assist with the judging. Both chefs found new ways to nitpick over a dish and so it all came down to Prawns. The teams had been on equal footing until came down to Kanae and while she wasn’t great on the chicken she did make a turnaround with the Prawns. She had used cashews and had needed Ariel to be her taste-tester because she was allergic to the nuts.

Their partnership shouldn’t have worked as good as it did, but thanks to their collaboration it was the Blue Team that won the challenge. They got to go to a luxury hotel in Las Vegas and were living it up while the Red Team were given grunt work. They had to stay behind to make fortune cookies and first they had to cut up all the messages. It had been a disappointment to all of the guys and so Scotley had no reason to take things farther by refusing to work. It was that same behavior that had alienated him from some members on his team. Trev had been annoyed with him and he wasn’t the only one by time Scotley took a break to make himself boiled eggs.

Trev had tried to say something and Scotley snapped at him. He told Trev not to get in his face and Trev made fun of Scotley’s touchy attitude. So they created tension in the kitchen. The Blue Team had come back and had instantly noticed that something was wrong. Heather was the closest with Trev and so she got the full story from him about what happened. He was complaining about how Scotley’s attitude might mean they have a terrible dinner service yet the first thing he did later on in the kitchen was to get on everyone’s nerves. Trev was going around to all the stations and telling everybody what they needed to do get their own stations ready for dinner service.

It had been annoying! Scotley had called Trev out on it and the two had a minor argument before deciding not to talk to each other. For a while, it had seemed that Trev was just going to focus on getting the scallops at his own station and he couldn’t do that right. He kept arguing with Jose about how well it should be done and, after getting yelled, Trev had passed the scallops over to Jose. Jose had been busy complaining about Trev was doing things that you would think he would better at it. He instead burnt everything and so Trev took over again. The guys continue to do that all night. They would trade off on stations anytime they received the littlest criticism from Chef Ramsay.

Trev and Jose were a problem when they worked together while Scotley was just a problem on his own. He couldn’t cut his beef wellington right. Scotley would cut it in a way that the pastry pulled away from the beef and so the Red Team were all over the place. They were scrambling to get things right when the Blue Team finished their dinner service and so Chef Ramsay asked the women to go help the guys get things right, but some of the guys were a bit touchy about accepting help and so Jose once again ruined the fish. It was seeing that mistake that finally got through to Ramsay. He knew the Red Team were useless and so he threw them out of the kitchen. And then he had the Blue Team finish the rest of dinner.

The Red Team were supposed to use that time to come up with two names and they actually came up with three. They said it was either going to be Jose and Scotley or it was going to Trev and Scotley. Scotley tried to rest the blame on Trev to Chef Ramsay and so Trev mentioned that Scotley took a lunch break during their punishment. They were so busy ratting each other that no one on the Red Team spoke up for them and so Trev, Scotley, and Jose were all put up for elimination. The final decision came down to Ramsay and he thought Scotley should go. He came in there full of energy and has been slowly slipping since Day 1! And while Scotley was sent home, it didn’t mean that the remaining members of the Red Team were going to suddenly like each other.