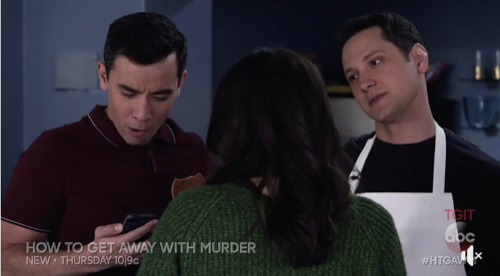 Tonight on ABC their hit drama How To Get Away With Murder (HTGAWM)  airs with an all-new Thursday,  February 8, 2017, episode and we have you How To Get Away With Murder recap below!  On tonight’s HTGAWM season 4 episode 12 as per the ABC synopsis,  “Annalise deals with an unforeseen issue after damaging details about a key witness are exposed in her case to help Laurel. Meanwhile, the “K4” continue their efforts to help build a case for Annalise’s class action lawsuit.”

Issac picks up a bag and goes home. He opens the bags. There are pills inside. He crushes them up and sniffs them as he cries. He thinks about his daughter. Annalise comes by. She calls through his door. He doesn’t answer.

The gang is all together. Laurel shows up. She just dropped her mother off at the airport so she could go home. She will come back for the trial later. They have croissants. They could use the comfort.

Bonnie meets with Frank. He gives her some equipment. He tells her not to tell Annalise what they are up to.

Isaac arrives home after going out in the morning. Annalise is there. He confesses to getting high. He cannot believe the DA is investigating him. Annalise tells him they are all going to help him.  They go out for breakfast. They talk about when they started doing drunks. For Annalise, she liked her vodka in law school. Isaac fell in love with heroin when he was younger. It wasn’t until he met Jacqueline in a Bodega that he decided he wanted something else.

Bonnie offers her fellow co-worker some help when it comes to going up against Annalise.

Frank calls Oliver. He needs some hacking tips. Laurel grabs the phone and tells Frank to stop messing with her father.

Annalise meets with her client. He details how he was given a bill from the prison when he got out.  He then details fighting and then killing, an inmate out in the yard. Before it happened he was in solitary for a year.

Annalise and the team meeting before the hearing. The case has been taken from the court and will go to the Supreme Court. Annalise argues that it should stay within her jurisdiction but the judge doesn’t want to hear it.

Annalise and Isaac meet for breakfast.

Bonnie’s co-worker checks in on her, she needs more time to look into the case.  Meanwhile, Annalise’s client thinks he is being played. Nate tells him he has his back. They are doing everything they can do.

The team works on what they need to tell the Supreme Court in a brief about Annalise’s client.

Frank comes to visit Laurel. He wants to be there for her. He wants to go to the visitation. He tells her he owes her because he is the reason she went into early labor.

Bonnie meets with Annalise. She tells her that things look bad for Isaac. Stella had oxycodone in her system, the same drug Isaac likes to do. Annalise shows up at his house after Bonnie leaves and asks him if he gave those drugs to Stella. He admits the drugs Stella took where his. He lied. He wasn’t clean for 23 years. He didn’t want his wife to know what had happened so he sent her a text from Stella’s phone saying she couldn’t do it anymore.

Laurel takes Frank with her to meet her son. Her mother is there but her father is not. Laurel’s mother begged her father not to be there. Laurel decides she wants to name him Christopher.

Bonnie’s co-worker accuses her of working for Annalise. Panicking, she walks into her bosses office and threatens to expose him and his fraudulent campaign if he doesn’t drop Isaac’s case.

Annalise loses her case for the prisoner but is happy when Bonnie shows up to tell her Isaac is safe. Annalise goes to see Isaac to tell him the good news. She realizes he is high. She tells him they are no good for each other. Isaac loses it. He blames her. She needs to be told no. Somehow he got sucked into her life. She ruined him. Annalise tells him she isn’t responsible for him and his choices. She calls his wife and tells her Isaac has relapsed before she runs out.

The team talks about how they need to keep going. They can’t quit now. Oliver and Connor decide they want to get married still. Bonnie calls Frank and asks him to move back in. Frank approaches Laurel’s mom on the street. He asks her how she knows Christophe.