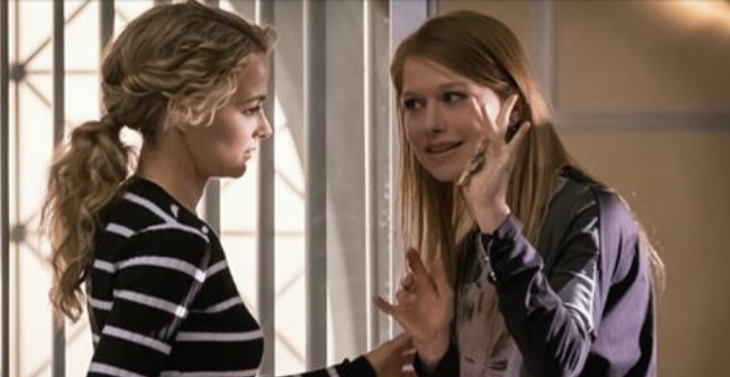 Needham answers the door to find her little sister on the doorstep. They haven’t seen each other since Christmas. Needham tells her she has to get to a murder. Her sister tells her she can wait at her house. Needham quickly picks up bottles and more in her room before heading to the scene.

Needham and Reinhart look over the dead shirtless body of a teenage boy. It looks like the killer had skills. They catch a lead and head to Amish country to talk to Caleb’s parents.

Caleb’s mother tells them that he was in New York working a construction job. A move his father disapproves of. Caleb’s mom, Mrs. Troyer, lets them into his bedroom so they can take a look around. They don’t find much but popsicle sticks and feathers. Reinhart thinks Caleb went to New York for more than work. They leave his childhood home to check out his New York apartment. They find a guy in there. He is a friend of Caleb’s, Seth. He is unaware that Caleb is dead. They accuse him of killing Caleb. He tells them that Caleb had secrets and was recently involved with a girl named Nicki.

Reinhart gets to thinking. Caleb’s popsicle sticks are like piano keys. They catch a lead and find Caleb’s piano teacher. They also see a photo of Nicki. They head to a nearby shelter where she is said to have stayed. She has a boyfriend named gene. They also share that an unknown man promised Nicki that he could get her a modeling job. They get a name and address and head to his studio. The smell outside is terrible. The landlord says he didn’t notice. He has allergies. He lets them in. Inside Needham and Reinhart find a dead body, the photographer. They look around and find artwork thought to be created by Nicki. Some of the drawings look like the photographer and Caleb. They think Gene may be behind it.

They track down Gene’s parent’s home. Nicki comes outside. Reinhart heads to talk to her. Gene comes outside. Needham introduces herself. He runs. She jumps on him and takes him down. Meanwhile, Reinhart tells Needham she doesn’t know who she is and what is going on.

At the hospital, Reinhart and a doctor talk to Nicki. She tells them that the photographer tried to get inappropriate with her. She ran and left her bag. Gene told her he would take care of it. When she met Caleb, Gene was also angry. She eventually found out what happened to both of them when she saw Gene’s drawings.

Needham’s sister tracks down Reinhart on the street. She hands him 2 MMA tickets for her sister. He tells her that she should give them to Needham herself. The sisters go into a fight after Katie was so drunk, Needham had to help her.

Needham vents about her sister to Reinhart. They get to talking about Gene and how he didn’t leave anything evidence at the crime scene. Something she says makes Reinhart think – maybe Nicki is the killer? Maybe she is the one who killed both of them.

Reinhart visits Nicki. He accuses her of killing both the men. He tells her she lacks empathy because she is a narcissist. She becomes irritated. She tells him he has no proof. He reminds her he doesn’t have proof yet.

Needham comes home to see her sister. She gives her an ultimatum. If she wants to stay with her she needs to stop her drinking.

While out to dinner, Reinhart’s waitress has a similar accent to Nicki’s. She is from Philly. Reinhart talks to Needham about it. They get the phone records from the shelter and track all calls to New England. They discover that Nicki’s real name is Amber. They hunt down an old friend of hers. Ella meets with them and tells them Amber’s boyfriend went missing and when she became a suspect she ran away.

Ella travels to the hospital to help Needham and Reinhart take down Amber. Reinhart talks Ella through everything and what she needs to say to Amber who pretends she doesn’t know Ella outside in the courtyard. Ella asks her to show her to the bathroom. Amber agrees, walking a short distance to grab a wheelchair for Ella. Reinhart comes out of nowhere. If Amber has amnesia, how did she remember her friend was wheelchair bound? They take her in. She admits to the killings.

Needham and Reinhart meet at the restaurant later that night to celebrate. Kate shows up and talks to her sister, apologizing and telling her she is willing to stop drinking.