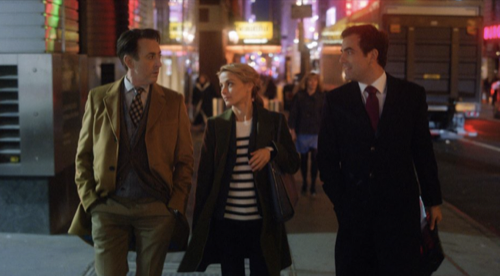 Lizzie arrives on the scene of a murder and tells the officer in front of the building that the murder suspect is Theodore Burton last seen leaving his mortgage broker who he killed. Lizzie Dylan goes to see Theodore and when he sees them he pulls a knife on a woman. Dylan approaches him and says he wants to talk, Theodore says all the money he had is gone, the company stole his nest egg. Lizzie causes a distraction and the women get free.

At the hospital, Dylan tells Lizzie that Theodore couldn’t wait for the negotiators, he needed someone to listen to him. Dylan is there but the nurse gave Theodore a lot of meds so he can’t talk. Lizzie asks the nurse for an update; he is stable and will be fine but they won’t be able to speak to him until he has his CT angio. Meanwhile, there is a man in the hospital with his wife and the nurse tell him she is discharged, he argues that she could get septic again, the nurse insists that she has to leave and will be ok because she is on antibiotics. The man asks the nurse for compassion, she tells him that if they don’t leave she will call security. There is a young girl waiting in a chair and she has a small dog with her for anxiety, the nurse yells at her to see a shrink and get the dog out of there.

Alarms start going off, the nurse runs down the hall and Lizzie and Dylan rush behind her. Theodore is in trouble, it is a code blue and it looks like they are losing him. Theodore is gone.

Jasmine, Dylan, and Lizzie are in shock that Theodore is dead. At the station, a call comes in on the tip line and says that Theodore is not the first one to be murdered at the hospital. They meet with the hospital administrators to try and get answers. Dr. James Walters is an ER doctor and he walks into the meeting, the administrator mentions nurse Albany that is under review and he says she has their full support, she is a top-notch caregiver.

Dylan and Lizzie leave, Dylan says that if they put nurse Albany, who was taking care of Theodore, then they suspected something.

Dylan goes to see Julian and tells him about what happened to Theodore. Julian says that the hospital has an impressive file and that it is going to take him time to go through it. There is one reporter that did articles about the hospital but they did not get published, her name is Rebecca, Dylan goes to see her.

Rebecca says that the staff of the hospital are careless and incompetent. She tells him to go see her source, the Taylors, their story will break his heart.

Pete the stalker drops by the station to speak to Lizzie, he lost his job and wants Lizzie to sign a letter of recommendation for him.

Dylan finds the Taylors, the husband is singing to his wife. He tells Dylan the story about him and his wife, a year ago they were training for a marathon and now she is in a wheelchair, furthermore, he thinks someone at the hospital is purposely killing patients.

Lizzie is working out in the park when a guy comes up to her, his name is Jeff and he is a personal trainer. She accidentally hits Jeff and gives him a bloody nose, he asks her out.

Lizzie is with Dylan, he says he suspects an “angel of death” is killing people with non-life-threatening ailments – he thinks it is nurse Albany. Andy says that he thinks the person wants to kill instead of dealing with annoying patients. Lizzie, on the other hand, is being protective of the hospital because she says they save lives. Lizzie asks Dylan if it is personal, he says that when he was in the sixth grade his mother was in a cancer ward and the nurse was kind, he doesn’t think nurse Albany is.

Lizzie gets a letter, Jeff from the park is suing her for hitting him.

Lizzie is with Andy and asks him how this guy Jeff could sue her, he totally tricked her. This is he said, she said case so he advises her that her tone is really going to be important.

Dylan and Julian go undercover in the hospital. It turns out the medical devices were transformed into murder weapons. Back at the station, Dylan and Lizzie go over clues – almost all of the people who died and little or no health insurance. Julian got a lead on a hacker, it may be the person who hacked the medical devices; Dylan arranges a meeting. It’s the reporter, Rebecca, that Dylan met, she used to be a tech person. Lizzie tells her this is personal, a doctor killed her mother and covered it up. Rebecca says the can team up and arranges a meeting the next day at noon, she says for her it’s not personal, it’s political – Rebecca leaves.

Dylan and Lizzie go see the Taylors and tell they have funding for additional care.

Lizzie and Andy are in a room with Jeff and his lawyer threatened to counter sue and Jeff dropped the case.