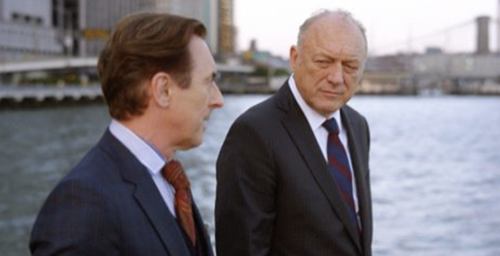 Dr, Dylan is reading a part of his book at a bookstore, meanwhile Det. Lizzie gets a call and runs out of the station. Det. Lizzie and Dr. Dylan head to the subway dressed in hazmat suits, they find many people dead on the subway train and a black backpack Det. Lizzie goes to open sees an aerosol can and says they can rule out an accident. It turns out that a poisonous gas was released and that is what killed the passengers. Dr. Dylan and Det. Lizzie sees a guy come out of a sewer and it turns out he robbed the dead people, Det. Lizzie takes him in. There were 12 victims on the train, nobody has claimed responsibility and it is being considered a terrorist act so the FBI is taking the lead.

Dr. Dylan doesn’t think it is a terrorist attack. Josh Monaz texted Grace Asher before he died, Dr. Dylan and Det. Lizzie interview and Dr. Dylan asks if she was having an affair with him, the answer was yes. Grace says they were trying to catch the train and she missed it because this guy came barreling into her, he was skinny, white, wearing a backpack and just before the doors closed, he jumped off, she didn’t make it into the train. She says the guy had a tattoo on his forearm, looked like a marijuana leaf.

The joint terrorism task force is going to take over the case. Lt. Jasmine give Det. Lizzie and Dr. Dylan a case that may be connected to the subway case, there was a small explosion at the Central Park carousel, there was one fatality. They interview two bikers who found a running shoe, there is also a carriage driver who rushed to help the victim and he was too late. The CIA arrives and talks to Dr. Dylan and tells him he can get him reassigned to the subway case, Dr. Dylan says no thanks. Det. Lizzie asks who that man is, Dr. Dylan says it is his father.

The victim was Cyrus Bryant, he was a CI in narcotics, he was involved in an ongoing investigation of two drug lords and looks like he was hit. Det. Lizzie finds a hole in one of the horse’s saddles, looks like she found drugs. Lt. Jasmine is getting fit for her wedding dress and the guys in the department think she is in with internal affairs and make Det. Lizzie goes in to check her. Lt. Jasmine tells Det. Lizzie that Sally is helping her to plan her wedding, she chooses her because Lizzie was too busy. Det. Lizzie is upset and hurt.

Dr. Dylan is at dinner with Andy, when Det. Lizzie and his father join them. Dr. Dylan’s father says that he is town until they close the terrorist attack and wants Dylan to hop back on to the case. Det. Lizzie reads her emails and tells Dr. Dylan there was a fire at the Olmstead hotel and a body found, did he want to go check it out and he quickly says yes to get away from his father. At the hotel, there is blood behind the back of the victim’s head and they moved some furniture around.

Dr. Dylan thinks that the horse and the room were the actual targets and the person responsible has only just started. Det. Dylan tells Lt. Jasmine that the person who did this had a personal connection, all child-like stuff, appears the person was trying to destroy some type of memories. Both Det. Lizzie and Dr. Dylan think all three cases are connected and are trying to prove it. They visit the body in the morgue, the victim died from a blunt force object. They figure out that the carriage driver might be the suspect, his name is Kyle and he had a maple leaf tattoo.

It’s a suicide mission, his father committed suicide and now he is planning something big. His father jumped off the Brooklyn bridge, they are worried Kyle may want to blow it up and rush there. They find Kyle and he says he didn’t mean to kill anyone, it was an accident. Kyle has a remote in his hand that is connected to a bomb. Dr. Dylan tries to talk him out of it. Meanwhile, Det. Lizzie is trying to find out where the bomb is located, she finds a horse trailer and believes she has found it. Dr. Dylan as Kyle reduced to tears and he jumps off the building.

Dr. Dylan is talking to Det. Lizzie about Kyle, he felt it was his fault that his father commits suicide. At the station, Lt. Jasmine and Det. Lizzie makeup, she tells her that she hates her veil, turns out the wrong one was sent to her. Meanwhile, Dr. Dylan goes to see his father off and he mentions to him that he already read his book, thanks to him for calling him a loving person.