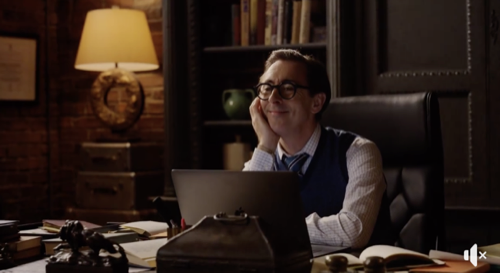 Dylan and Lizzie are on the scene of a crime. Jasmine is there and it turns out Abby Wright stole a car, it is turned over as it fell off a bridge and she is dead.

We look back; Jasmine is at an event and someone touches Abby in the crowd and she freaks out, she gives an excuse that she is startled and her husband ushers her inside the building. Abby drops her bracelet, Jasmine takes it for her.

At home, Andy is excited about the basketball game, Dylan would rather go out but gets a message from Lizzie.

Back to the crash site, Lizzie thinks it may be suicidal. Abby called 911 before the accident, she said that someone was trying to kill her. At the station, they are looking into everything, Jasmine is upset, Abby was a friend of hers. Abby dialed a 212 number, it was the last call she made before 911 and the number belonged to Stella Mitchell, but she says it is a wrong number. Tests results came back for Abby, she was not intoxicated during the crash.

A few minutes after Abby got into the car, she did a full loop. They found pieces of a 69 Mustang on Abby’s car, in a specific and rare blue color. Abby and Dylan go see Abby’s husband, asks him if anyone wanted to kill her – her assistant is there, she says there is a lot of hate mail because Abby wanted to move the team she owned.

Dylan asks Lizzie to take care of the hate mail because he wants to go on field research. Dylan goes to see Andy at work and tells him he wants to understand his love of sports. Andy says they connect with the team, they know the players and want them to win, that is it. Dylan is about to leave when he hears someone’s voice, it is a guy named Tomahawk and it is a podcast. Back at the station Dylan tells Lizzie about the voice and they narrow it down to a waiter at the event Lizzie was at the night she died, the guy apparently snuck into the event and he owns a Mustang the same color that was on Abby’s car. Jasmine wants him picked, she is going to interrogate him herself.

Dylan and Lizzie go to Tom’s (Tomahawk) house and notice there are marks on his car. Tom says Abby sideswiped him.

Dylan and Lizzie verify what Tom said with video surveillance and he was telling the truth. While they are looking at the video they notice that a white car circles and follows Abby. The license belongs to Uri Mingus, Jasmine says he had a gun at the party. They find Uri and he said that her husband hired him to follow his wife.

There was a break in at Abby’s house a few weeks before her death, her husband says it was the housekeeper who did it; he also says that he had his wife followed because he was worried about her.

Dylan and Lizzie go to the housekeeper’s house, she is not there, an older lady says she went back to El Salvador and she is afraid THEY are going to find out where she is.

Dylan and Lizzie watch some videos of Abby and he finds that maybe she had a health problem because she seemed so much on edge.

Abby is on a date for the first time in a long time and having a hard time with small talk. Meanwhile, Dylan is at a bar watching sports when Andy shows up. Abby reverts to showing her date photos of victims and she starts getting messages and answers them in front of him, he calls it a night. In the bar, there is a fight and Dylan has a thought – he wants to look at Abby’s head.

At the station, Dylan thinks Abby was choked at the party – they think her husband Russell killed her and she was handling abuse for many years. Dylan thinks there was no break in, he thinks Russell may have fought with her that day and that is how the house looked like a break in.

Uri helps the police find the housekeeper Sophia and she confirms that there was domestic abuse in the marriage. Dylan and Lizzie go to arrest him, he says he did nothing to her and she is the one who had the problem.