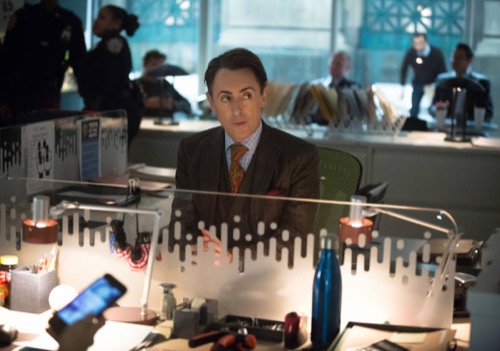 A suicide bomb goes off in a park, meanwhile, Dylan meets with Ashley, a publicist who wants to work with him and says she is the best. Furthermore, Ashley wants New York Magazine to write a story about him and put him on the cover.

Jasmine is with Lizzie and tells her she wants to give her a promotion to second grade detective. Jasmine gets the call about the suicide bomber. When Lizzie gets there, Dylan is already there. Dylan says the suicide bomber, Ramsay, doesn’t fit the profile; Dylan and Lizzie head to his apartment. Dylan finds a calendar, looks like there is going to be another suicide bomb going off at 4:21pm, also in Battery Park. They head to the park and choose the wrong guy, in fact, the bomb goes off and the suicide bomber was a woman this time.

The suicide bombers name is Barbara Cramer; she was more angry about politics lately and may have had a new man in her life, but otherwise nothing else.

Julian tells Dylan not to do the New York Magazine story.

The two bombs from the suicide bombers were identical.

Dylan tells Andrew that NewYork Magazine is doing a story about the squad and there will be a shoot at the station. Andrew doesn’t want anything to do with the article, he says he doesn’t want his life in a magazine. Dylan says that he is always proud of what Andrew does and he would hope Andrew would be equally proud of him and want to help all he can.

Julian goes to see Lizzie, he tries to enlist Lizzie’s help to encourage him not to do the article in New York Magazine as he could expose himself to past enemies.

Ashley is at the station to do the photo shoot, everyone looks there best but Lizzie dresses the same as she usually does and Ashley asks her if the is a Menonite.

Dylan and Lizzie are going through Ramsay’s things and Lizzie finds a fake prescription for anti depressants and on the back there is a date; Dylan thinks they Barbara and Ramsay were working with someone else, they head back to Ramsay’s apartment to see if they can find other clues. Dylan finds the letter M etched on the ceiling and there is fan that makes the letter X, he figures out that the next bomb is going to be at a fountain in the park. A suspicious man is walking by and they apprehend him, he has a note on his chest that says BOOM, meanwhile in another area of the park and suicide bomb goes off, it was a guy on a motorcycle who did it. Dylan thinks that the suicide bombers weren’t involved, he thinks they are victims.

Back at the station, Dylan tells Lizzie and Jasmine that he thinks this is personal, in fact he thinks it is a Dr. Beams that is after him. They reach a dead end, Beams died 11 years ago.

Andrew goes to see Dylan and apologizes, he says he didn’t want to be in the magazine because he never told his parents that he isn’t a lawyer. All of a sudden, Dylan realizes it wasn’t an MX, it was MT and now he realizes who is after him.

Lizzie goes to see Julian, he couldn’t find any specifics, she tells him that she thinks Dylan is somehow connected to the bombings.

Lizzie meets up with Dylan, he tells her that he was involved in a project at camp, they were given partners and instructed to spend all their time with them and share their hopes and dreams. Beams ran the test, belittled their dreams and destroyed everything they hoped to accomplish with sarcasm. Dylan was so sure it was Beams because he knew everything, but his partner, John Raymond also knew his dreams. Dylan narrows down where John will hit next, its another park. Dylan finds John in the park and tells him to take his hands out of his pockets, he is surrounded. John takes out a detonator out of his pocket, Dylan tells him he should be mad at Beams, he says he was and that is why he killed him. Dylan tries to talk him down, it works, he puts down the detonator and they arrest him.

Dylan and Lizzie are back at the station. Dylan didn’t use the publicist and he got bumped from the cover.