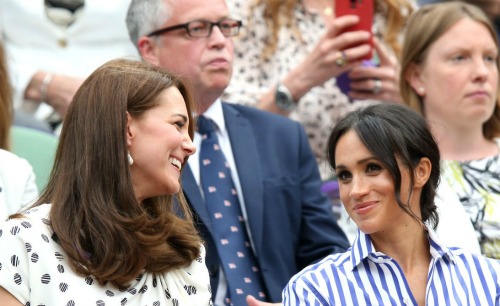 Kate Middleton and Meghan Markle have just made their first solo royal appearance together and now experts are weighing in on their supposed new friendship. As a matter of fact, many royal fans and critics alike couldn’t help but notice that both Duchesses looked like they were at ease with one another during the women’s finals at Wimbledon this past weekend.

Body language Judy James recently told The Daily Mail in an interview that the two sister-in-laws seem to be getting on well for now. That’s because the two ladies revealed in several different clues that they are trying their best to get along, or at least get to know each other a little bit better.

James reveled that Meghan Markle often looked at Kate Middleton in the face during the match, which meant that she was trying to pick up clues on what to do next. In addition, Kate Middleton looked rather relaxed during the game.

According to her observations, James said that Kate’s, “The rounded apple cheeks plus the crinkling round the corners of the eyes showed the happiness to be the new royal double act was mutual and genuine.” In other words, if Kate Middleton was faking it, she sure was doing a good job of hiding it.

Now as far as what is really going on behind palace doors, only Kate Middleton and Meghan Markle know. After all, it’s their job to make it look like they are getting along in front of the entire world. The last thing Queen Elizabeth would want to see is a nasty cat fight between Prince William and Prince Harry’s wives.

But at the same time though, this is a huge new adjustment for the Duchess of Cambridge, just like it is for the Duchess of Sussex. Up until now, Kate Middleton had the public spotlight all to herself. She’s not used to sharing the attention with anyone else, and certainly not with a former Hollywood actress.

Time will tell if Kate Middleton and Meghan Markle will continue being friends or even friendly for that matter. Even if things do get icy between them, it will be hard to hide it, especially when it comes to their body language during royal engagements and public appearances.