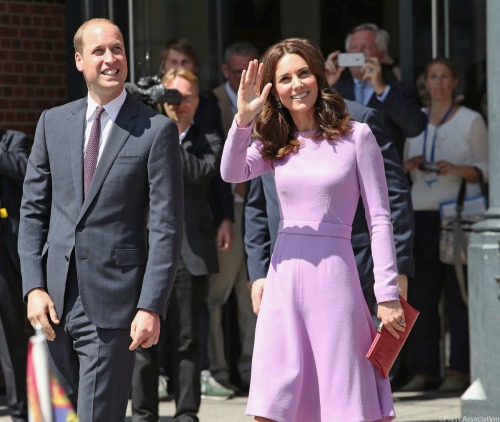 Kate Middleton is back at work. The Duchess of Cambridge is going back to the daily grind after having spent the last several months on maternity leave following the birth of her third child, Prince Louis.

Throughout the summer, Kate Middleton has only made a handful of appearances in public, including Prince Harry and Meghan Markle’s wedding back in May and of course, the Wimbledon tournament in July. This week she is visiting the Sayers Croft Forest School and the Wildlife Garden at Paddington Recreation Ground to see how children are coping with their emotional and physical wellbeing. She will also join in on sessions and hear from instructors at the outdoor learning center about their work.

Interestingly enough, Prince William is on a private working trip in Africa. Many royal observers had thought that Prince William decided to go on the trip by himself simply because his wife was still on her official maternity leave. But now that Kate is back at work, some are pointing out that Kate could have easily joined William on his trip to Kenya and Tanzania.

Either the Duchess didn’t want to travel too far away from her children or William is simply using the trip to privately visit with his friends. After all, his ex and good friend Jecca Craig and her husband live in Kenya.

Later this week, Kate is scheduled to make an appearance at a charity event for World Mental Health Day. She will then reunite with her husband Prince William to attend the wedding of Princess Eugenie and Jack Brooksbank. Now, whether or not the Duchess will take on more work in the coming months remains to be seen. After all, Kate has made it clear that she prioritizes her family life over her work an has even canceled royal engagements in the past to be home with her children.

Now that she has three small children at home, many royal critics are interested to see just how the Duchess of Cambridge will manage to juggle her role as a mother and her role as a member of the British royal family. What’s more, many royal critics also can’t help but wonder if Kate will be taking on more solo appearances like she has so far or if she will attending events with Prince William by her side.

In the meantime, don’t forget to check back with CDL for all the latest news and updates on Prince William, Kate Middleton and the rest of the royal family right here.