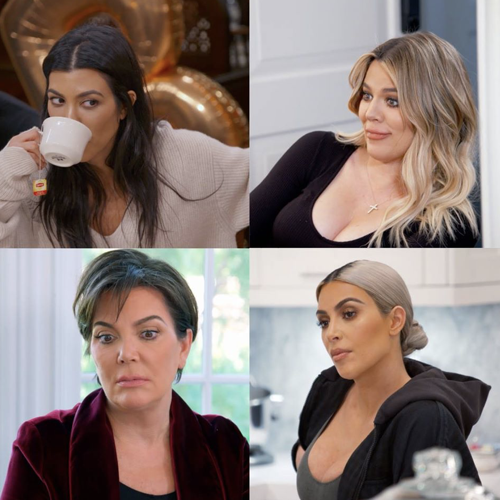 Tonight E!’s most-watched series Keeping Up With The Kardashians (KUWTK) returns with an all-new Sunday, August 5, 2018, season 15 episode 1 and we have your KUWTK recap below.  On tonight’s KUWTK season 15 episode 1 called,  “Photo Shoot Dispute,” as per the E! synopsis, “A fight over the family Christmas card escalates into a major feud between Kourtney, Kim, and Khloé. Meanwhile, Scott feels guilty for moving on to a new relationship.”

Kim turned thirty-seven on tonight’s all-new episode of “Keeping Up With the Kardashians”. She had a birthday dinner with family and friends. There were a few notable exceptions because not everyone could make it and Kim hadn’t let that bother her. Her sister Khloe had been pregnant at the time and so Kim had understood why her sister hadn’t been able to fly in though she was getting on with Khloe a lot better now than ever before. She even came to Khloe’s defense when Kourtney said she couldn’t stand Khloe. Khloe had been her usual outspoken self and, for some reason, that was getting to Kourtney. Kourtney said she wasn’t going to take any more of their sister’s abuse and that she had gotten to the point where she was ignoring Khloe’s phone calls. And so Kim reminded Kourtney that Khloe was hormonal.

Of course, Khloe was going to be a little extra now that she was pregnant and it was up to her friends as well as her family to be understanding. Kim got that even if Kourtney didn’t. Kourtney believed that Khloe has been coming for her for the past couple of months and that she wasn’t distancing herself as much as she was finally standing up for herself. Kourtney had taken a lot of flak last season when she hadn’t wanted to mention her boyfriend on the show and when she had found her own passion project. Those things were close to her heart and Khloe kind of crapped all over it. Khloe had thought it was ridiculous that Kourtney would mention going on vacations and wouldn’t name who she was going on vacation with – so that’s where she brought up the boyfriend against Kourtney’s wishes.

The other part had been when Kourtney announced her interest in interior design. She had been trying to find her own thing for a while and so she thought her sister would be supportive when she mentioned she was approached by a magazine asking her to do a promo for interior design. Kourtney had thought that maybe that could be just hers and Khloe had crapped on it by saying that was if Kourtney didn’t grow bored of it. Kourtney had gotten upset by that and she began pulling away shortly after that because she said she couldn’t take Khloe’s abuse. Now, Khloe would disagree on the whole abuse part because both she and Kim had been burned by Kourtney. Kourtney would tell them that she wanted to do a project with them and then she would pull away from the project after everyone had done their best to accommodate her.

Kourtney was known in her family for pulling away and being noncommittal. She never wanted to be part of the planning and she wasn’t willing to help the others with their projects. Take, for instance, the Christmas Card. Kim had wanted to do a family Christmas Card for the longest time and she finally got everyone to agree to do it but she didn’t realize until afterward that she had put too much on her plate. She was focusing on her makeup line, throwing a baby shower for her youngest child, and was trying to put together a Christmas Card despite everyone’s hectic schedules. There were some like Khloe that offered to help with at least one of those things and Kourtney hadn’t offered to help at all. She had knowingly let that window close and so later she had a fight with Kim over this freaking card because she hadn’t liked how Kim did it.

Kim had had two meetings on the day of the photo-shoot. She had a meeting about packaging for her newest collection and she also had a meeting for the baby shower. Kim thought she could get through with the meetings first and then have a photo-shoot. She had scheduled everyone in for glam for that late afternoon (6) and the shoot itself to happen that night (10). Kourtney had taken a look at that schedule and hadn’t liked it. She said she could be home that late in the night and so everyone suggested she talk to Kim about it. Kim was at home during that time and Kourtney had gone to talk to her only it hadn’t taken much for their little talk to devolve into a fight. Kourtney wanted the photo-shoot to be earlier that day and had suggested that Kim moved around the meeting, And when Kim hadn’t wanted to do that, she told her sister that she would be leaving the studio by four.

Except Kim hadn’t wanted to rearrange everything for just Kourtney. She said those meetings were important because she had to work and, aside from that, she didn’t want to take her kids out of school early just to appease Kourtney. Kourtney, on the other hand, said that the day would be running too long and that she would much rather be putting her kids to bed. So the fight came about when Kourtney refused to budge because Kim thought the person that had the least to do should be the one most accommodating. Kim had even said those words and so she went full on ugly. She told Kourtney that she doesn’t have to be included and that she was the least interesting to look at. Kim also called Kourtney entitled and so Kourtney stormed out of the house in tears. She was crying so badly that Khloe called her to see how she was doing and Kourtney went full rant.

Kourtney said that she didn’t have another job because she just wants to be a mother to her kids. Her kids were the most important thing to her and Kourtney said Kim wasn’t like that because Kim was more superficial. In fact, the whole family was called disgusting for the way they prioritize things and Kourtney said she wasn’t like the rest of them because she didn’t surround herself with fake relationships. It got to the point where Kourtney was herself being hurtful and so the family did their best to move on from the event. Kim rearranged things for Kourtney and unfortunately, that ended up meaning some of the others had to be photo-shopped into the family photo. And while that had been annoying, things still weren’t the same between Kourtney and Kim because they literally didn’t talk the entire photo-shoot.

It had awkward and uncomfortable for everyone there however they all thought things would return to normal eventually and so it had come as shock when Kourtney didn’t bother to show up at Kim’s baby shower.

Everyone else had been there, just not Kourtney!

Kourtney had been the one to text Khloe and tried to have a conversation while Khloe was at the baby shower.