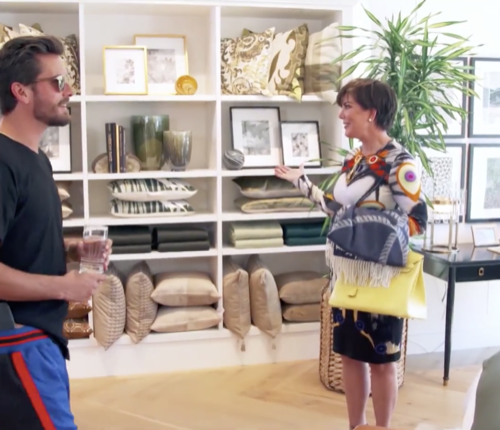 Tonight E!’s most-watched series Keeping Up With The Kardashians (KUWTK) returns with an all-new Sunday, January 21, 2018, season 14 episode 15 and we have your KUWTK recap below.  On tonight’s KUWTK season 14 episode 15 called, “Diamonds Are Forever,” as per the E Online synopsis, “Scott’s behavior takes a turn for the worse after learning that Kourtney officially has a boyfriend; Kourtney struggles to find her career passion; and Kris comes up with a way to preserve her memory long after she’s gone.”

Kris met with her old friend Faye Resnick to talk about OJ Simpson on tonight’s all-new episode because they knew he was coming up for parole. But while Faye was worried that he might actually get out, Kris wanted to remain in denial. She didn’t want to believe the man she suspected of murdering of her friend was going out. So Kris tried to hide from it. She tried to change the subject because she was willing to talk about practically anything else and luckily for her a fan came up wanting a picture.

The fans were really sweet and so Kris had no problem with taking a couple of pictures. But Kris noticed that one of the women had a ring that didn’t seem like an opal and it turns out it wasn’t. It was actually the young woman’s grandmother. The grandmother’s ashes had been input in a ring for her and so now she got to walk around with those ashes on her finger, but the whole thing had given Kris an idea. She was never afraid to talk about her own death happening one day and so she wondered if she asked her family turn her own ashes into one big diamond – would they do it? They weren’t in the macabre as much as she was and they hated every one of her suggestions.

Kris had suggested a family mausoleum and she had even gone coffin shopping. But she thought becoming a diamond would be preferable to be put in the ground and so she brought the idea to Kim. Kim was the one that would handle these things in the family and Kris knew that she was the one to convince so she showed her the case. It was a glass case that could be lit up and so Kim thought it looked the rose from the “Beauty and the Beast”. So Kris liked that because then she could be the beauty and so all Kris had to figure out was how to do it.

Kris wasn’t sure if the diamond angle could be pulled off. She just knew that she wanted to do it and so she was going to do her research on that when her daughters came to her. Kim and Khloe had wanted Kris to talk to Kourtney because Kourtney wanted to create her own interior design collection and they all knew she couldn’t do it. They said Kourtney likes to start projects and just never follows through. But Kourtney kept telling her sisters that she found her passion and that she could finish it because she was excited about it. She figured it wouldn’t be like work.

Except her sisters knew that work was always going to feel like work in the end. That’s why they didn’t believe in Kourtney’s collection and thought she eventually gave it up because that’s what she’s always done. She gives up on things because she was so used to working with her sisters that she didn’t bother with finishing anything on her own and so the sisters brought in Kris. Kris met with Kourtney and talked about everything Kourtney wanted to do which included accessories and maybe a show that would introduce her to that scene.

Kris said that it was going to work on top of work and that’s never been Kourtney’s top priority. Her priority has always been her kids and unfortunately, she couldn’t always rely on Scott to pick up where she left off with them. Not when he’s acting erratically at the store with Kris or calling Kourtney at two am to see if he could work things out with her! He was a mess and was unraveling as Kourtney was trying to get her own business off the ground. So Kourtney stopped trying with Scott altogether and she told him to not bother her because she has a boyfriend.

Kourtney used those words and so its official now. She has a boyfriend and she needed Scott as well as the rest of her family to respect her boundaries. But strangely it was Scott that came around first. He talked things out with Kourtney and he knew that they should work at becoming friends rather than anything else because they had kids together. So Scott said he was trying to get better and hopefully he sticks with that yet Kourtney decided to go ahead with finding out whether or not the interior design was for her.

Kourtney did a photo-shoot of her house and she talked to some experts. But while she wasn’t sure if that was her passion or if she was still looking for one, she knows now that she has to do things on her own. She couldn’t rely on her sisters for help on whatever she chose to do and so she did at least admit that she had been dependent on them. So Kourtney getting better and her family moved on. Kris went back to thinking about becoming diamond and she eventually decided to just leave the decision to her children for how they want to handle things after she’s gone. And so the diamond thing was firmly off the table now!