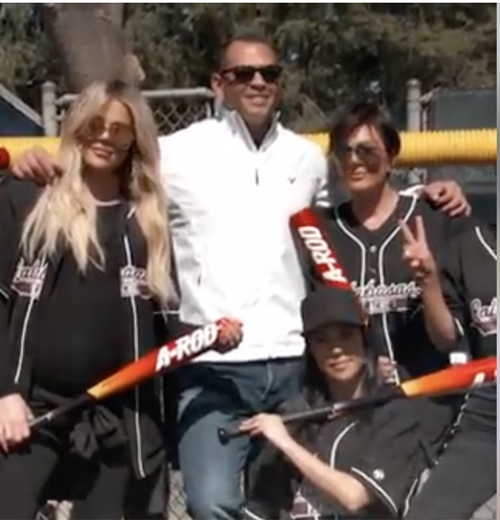 Tonight E!’s most-watched series Keeping Up With The Kardashians (KUWTK) returns with an all-new Sunday, October 9, 2018, season 15 episode 10 and we have your KUWTK recap below.  On tonight’s KUWTK season 15 episode 10 called,  “Let’s Play Ball!” as per the E! synopsis, “The Kardashians take on the Jacksons in a charity softball game. Meanwhile, Kris pools her resources to renovate the Watts Empowerment Center, and Khloé and Scott devise a clever plan to reveal Art Vandelay’s true identity.”

Kris has always been charitable. She gives to charities each year and she taught her own children to do the same because Kris knew how privileged they were. Only Kris had wanted to do something different for the Watts Empowerment Center. The community center needed some renovation as we as well funding if it was to remain open however it was imperative that the community had someplace like the center. The center offered a safe place in gang territory and so Kris hadn’t wanted the community to lose that. She heard from her friend Justin Mayo who was the Executive Director of a nonprofit organization called Red Eye and he told her about how much the center was going to need on tonight’s all-new episode of “Keeping Up with the Kardashians”.

Kris knew that she would have to pool all of her resources to get something truly worthwhile, but her daughter Kim had had an idea and it had been a good idea. Kim suggested they have a charity sports event. She and her sisters had talked about which sport they felt most comfortable playing and they came to the conclusion that they should go with softball. The sport seemed easy to the Kardashians and they figured they wouldn’t embarrass themselves. They also realized that they should make this game interesting and so they decided to call up their old friend TJ Jackson to see if his family would be willing to play against theirs. The Kardashians basically grew up with Tito Jackson’s older sons and they’ve all been friends for years. And so they asked TJ for this favor.

TJ knew that this was for a good cause and so he agreed to do it. He also said he’d talk to his brothers for them and they were sure that all the Jacksons would be good for the game. The sisters also thought they should practice for their upcoming game and so they went to a nearby field. They all assumed that they would just get things and it turns out they weren’t all that good at softball. The only person that showed some talent was Kourtney. Kourtney had hit a home run and she hadn’t injured one of their team members like Kim did. Kim nearly hit her mother with the ball and Kris’s dive to get out of the way had also injured her. Kris hurt her wrist and it took her out of the game against the Jacksons.

Thankfully, there had been others there to take Kris’s place. The Kardashians had plenty of friends and so what they still lacked was the talent. Their team was dismal at the softball. People either couldn’t catch or hit the ball and so the family brought in experts. Khloe heard from a friend about a coach who played in the Olympics and the family had this coach come out to see what they were doing wrong. They were later given tips about what could change and they tried doing them yet they were still some areas that needed work. Kris could see that for herself and that’s why she reached out to Alex Rodriguez. He was a famous baseball player and his skills could come in handy for Team Kardashian.

Kris also went ahead with making some calls and she got many people interested in the community center. Adidas came through and did all of the outside courts for the center. Meanwhile, the money was coming in and it went towards the kitchen renovation, the inside basketball courts, and even gave the whole building a much-needed facelift. Kris and her family truly did everything possible to make the community center bigger and better. They also got around to their softball game and had Alex Rodriguez. He too did everything possible and unfortunately, nothing worked for Team Kardashian. They were still horrible at the game! And no one thought they could have or score anything by the way they played.

The first half of the game had looked good for TJ’s team. They had been up by seven to none and no one thought the second half would be anything different, but somehow Team Kardashian had a small comeback during the second half. They actually scored points and they were almost tied with the Jacksons. Unfortunately, their comeback had come a little too late in the game and the Jacksons did end up winning. They had finished with a score of seven to five and so they hadn’t done too bad. They also didn’t mind donating towards the Jacksons’ charity and so some lucky organization received fifteen thousand dollars because of this game. And it didn’t hurt that everyone had had fun because they did enjoy themselves.

And afterward the family went to the grand reopening of the Watts Empowerment Center and they saw for themselves how much they place had changed. It now offers an opportunity for education and it still is a safe place within the community.

The Kardashians had been proud of their mother for what she and in the end, Khloe had begun feeling better about tricking her mother. She let Kris believe that there was a famous painter by the name of Art Vandelay and Kris had even been gifted some of the artwork from this alleged artist though when Khloe admitted she was the artist all along – Kris had been a good sport about it and had laughed.