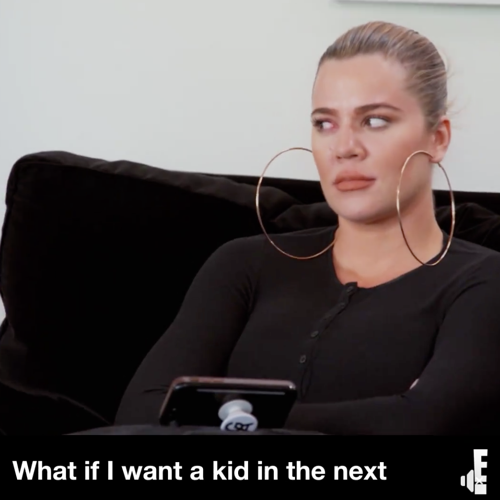 Tonight E!’s most-watched series Keeping Up With The Kardashians (KUWTK) returns with an all-new Sunday, February 25, 2018, season 14 episode 19 and we have your KUWTK recap below.  On tonight’s KUWTK season 14 episode 19 called,  “Trimester Trouble,” as per the E! synopsis, “Khloé attempts to keep her pregnancy a secret while dealing with some complications; Kourtney questions whether she’s done having kids; and Kris debuts a loud new hairdo.”

There was already some buzz about Khloe being pregnant on tonight’s all-new episode of “Keeping Up with the Kardashians”.

Khloe and Tristan had recently old friends and family, but that’s all they told. They hadn’t mentioned to anyone else that they were going to have a baby or that planned on starting a family and so the fact there was buzz had been worrisome. Khloe had wanted to find out how the news had gotten out and she had put her people on the case. She had them reach out to TMZ, who were responsible for the buzz, and her people had then tried to grill the organization. They asked TMZ where they were getting this news from and TMZ had surprisingly been tight-lipped. They hadn’t mentioned where the buzz was coming from and was in effect sitting on the news until they could get an actual confirmation.

Except Khloe wasn’t confirming anything. She realized TMZ hadn’t been sure if her pregnancy news was real or not and so she tried backing away from the situation because she had wanted the chance to tell people on her own time. So Khloe had tried to hide her pregnancy for a little bit longer when she ran across her first complication. She started to notice some spotting and had gone to the doctor that told her she lacked a certain substance that her body was supposed to develop on its own. The fact that it didn’t mean Khloe had to get injections several times a day or risk suffering a miscarriage. And so that just assured Khloe that she had been right about not revealing she was pregnant until she was out of her first trimester.

Khloe didn’t want to risk telling everyone that she was pregnant when she wasn’t sure if she could carry to term though, while Khloe was worrying about her pregnancy, her sister Kourtney was questioning what steps she should take for her own future. She had thought she was done with having kids because she has three as it is and so when she thought about having another baby it was because she was questioning if she would want a child with the new man in her life. He was younger and didn’t have any kids of his own so there was always the chance that he would want to try for a baby. The problem was that Khloe wasn’t young anymore and so she would have to think about the alternative of getting pregnant. Like freezing eggs.

Kourtney thought if she froze her eggs that she could then always use them at a later date if she decided to have another baby and so she talked the decision over with everyone. She talked about it with her sisters and they were so giddy about her getting serious about the guy in her life that didn’t take what she was saying seriously. Kourtney’s friends, on the other hand, had a lot to offer. She knew someone that had frozen their eggs and who told Kourtney that it had been an ordeal. The hormone injections had left her reeling and the friend had admitted that she had been depressed for a while afterward. So that got Kourtney thinking. She didn’t like taking medications because she was a firm believer doing things naturally and so she second-guesses her decision to freeze her eggs.

Kourtney figured her own mother had no problem with getting pregnant after forty and so she didn’t need to freeze her eggs, but Kris had thought differently. Kris has been trying on a blonde wig and has been channeling her own “Devil Wears Prada” so she had been goofing off until she found out about Kourtney. Kourtney has access to technology that hadn’t been around when Kris was pregnant and so Kris thought it would only be wise to take advantage of what’s out there. She told Kourtney to go ahead with freezing her eggs so that no matter what she would always have them just in case. And so Kourtney was getting a lot of feedback that she just wasn’t sure about because all she knew at the moment was that she didn’t want to close that door on having another baby.

Kourtney later decided to hold off on freezing her eggs because she didn’t think her body was ready to go through all of that and so she’s treating this like she treats her other projects – she stalls. Khloe, on the other hand, had followed her doctor’s orders to the letter till she safely moved past her first trimester and so she was finally getting the chance to be excited about having a baby. She now couldn’t wait to find out the sex because she knew that she would be happy with whatever and that Tristan was sort of rooting for a boy even though it was the man that determines the sex of the baby and so Khloe already has a fighting argument if it turns out she was having a girl. But TMZ eventually ran the story on her pregnancy and confirmed that she was going to be having a child in 2018.

That had upset Khloe because again she had wanted to tell people on her own time and so there was nothing she could really do once the news got out.