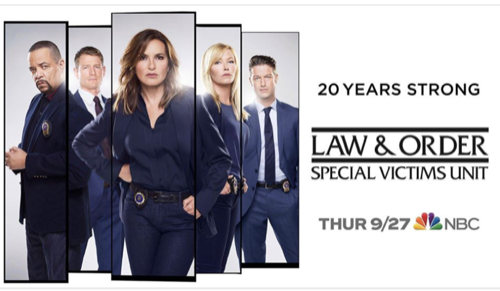 Tonight on NBC Law & Order SVU returns with an all-new Thursday, September 27, 2018, double episode and we have your Law & Order SVU recap below.  On tonight’s Law & Order SVU season 20 episode 1 and 2 premiere called “Man Up – Man Down,” as per the NBC synopsis, “In the Season 20 premiere, teenager Sam Conway shows evidence of rape but refuses to name his attacker. Meanwhile, Benson and Rollins confess to some major life changes. In the second half, ADA Stone blames himself for the shocking verdict in Sam’s case, and before Benson can offer help, Sam makes a tragic decision.”

The police were called when a teenager was found with blood on his pants on tonight’s all new episode of “Law & Order: SVU”.

The teenager’s name was Sam Conway. He was fifteen-years-old and he said he got blood on his pants after he fell however neither the teacher nor the principle believed him. They saw where the blood stain was locked and it looked like he had been assaulted. There was no reason to assume such assault could ever occur accidentally and so the police were called. Both Rollins and Carisi were the responding officer and they tried talking to Sam. Sam was unfortunately still claiming it was an accident and therefore the detectives decided to go around him. They asked his mother if she could talk to her son into going to the hospital and that’s where the truth came out. Sam had been sodomized and it happened fairly recently. And so the detectives decided to ask Sam’s family about his movements.

Only Sam hadn’t gone anywhere alone because they said he had been with them the whole time. Sam had gone on a hunting trip with his father and brother and they had just gotten back, so that raised the alarm with Benson. She knew of cases in which the offending party was a family member and she later decided to keep digging into this case even as Sam still refused to talk. The teenager was eventually sent home with his family and so the detectives looked into Sam. He was a quiet kid that had friends and was liked by the teachers but one of his friends had come forward after the police tried to contact her and she said that Sam had called her from a bar the night before. The police had looked into it and it turns out Sam had gone to a bar.

Sam went on to very drunk and he met a much older man there only nothing happened. The man found out how young Sam was when the drunk teenager started rambling. The teenager had been upset about the hunting trip and that’s why he felt the need to get drunk in the first place. Something happened on that trip and, while his date that night wasn’t interested in what happened to the rabbit, the detectives wanted the full story. They went back to the school to ask the brother, Brian, and the moment they mentioned they mentioned the rabbit he had freaked out. He rushed off before they could ask him anything else and the next thing the detectives heard the school was once again having a problem with the Conways.

Brian reportedly attacked his brother. The two were still fighting by time the cops arrived and Brian was heard yelling at Sam to keep his mother closed. Then when Benson asked Brian why he didn’t want his brother talking, he tried to run and was caught soon after. The police took both boys down to the station and only Brian was put in an interrogation room because they believed Brian might have raped his brother. The police were still under that assumption when the parents arrived and Sam was suddenly telling the cops that he was gay. He said that met another teenager and that they had sex. The parents or really more the dad had said that was that. John said his son being gay wasn’t a crime and that they wont be pursuing any charges. And so the cops waited the mother was home alone.

Molly had seemingly agreed to everything that happened until the police got her alone. They believed that she knew something because nine out of ten the mother always knows and so Molly soon began telling them exactly what happened. She had walked in right after the rape and she had seen who hurt Sam – it had been her husband John. John had zipped up his pants and walked out of the room like nothing happened. He event told her later that night that she should remember to wash Sam’s things and that was all he was going to say on the matter. Molly went on to do as he asked and she washed Sam’s underwear that had blood on them yet she was willing to tell the truth and hand over the underwear. She knew that her husband was dangerous and she wanted to protect her kids.

John was arrested soon afterwards. He was put through a trial even though Sam refused to come forward and so ADA Stone had to get creative. He found a way to Molly’s testimony included and he knew right off that the case was wavering. The wife said she only saw her husband do his belt and her testimony wasn’t much. Especially as the defense put Sam on the stand. He was adamant that he had just had sex and that his father never raped him. He stuck so close to the story that the jury decided that he was the most believable. They cleared John Conway of all wrongdoing and, when Molly was along again, Benson went to talk to the mother. Molly said that its best if she kept the family together in order to be there to protect her sons and so Benson begged her to call if anything ever happened.

Molly ignored all of Benson’s pleadings. She thought she knew what she was doing for her family and that her husband would never do what he did again because he admitted to her that he went too far. Molly thought that they could go back to being a happy family again if she ignored what happened and so she hadn’t made the least attention to the fact that Benson said Sam was going to need therapy. The teenager had been traumatized and he needed to be able to speak to someone, but that never happened, so he only got worse. Sam had believed his father about manning up. He thought he was too weak to kill the rabbit and so he wanted to prove that he was a man by killing something like his dad.

John had allegedly killed a moose when he was twelve and Brian had killed an animal of his own when he was fifteen however Sam thought the only way he could man up was if he took his hunting rifle to school. He began killing his classmates and he only stopped when he ran into his brother. Brian hadn’t been afraid to confront him and Sam ended up repeating to him everything Brian told him on that damn hunting trip. Sam was telling his brother that he wasn’t afraid to pull the trigger now and he left the school right after that. The police eventually found him at the baseball field and he had a gun to his head. He would have killed himself if it hadn’t been for Carisi. Carisi told Sam that his father was heartbroken and so worried about him.

It made Sam believe that his father cared about him and the truth was his father was ashamed. He struck Sam the moment he saw him and the police had to separate them though the police weren’t the only ones that believed Sam snapped because of his father. John must have been thinking the same thing too because not long after Sam received his first therapy session the family asked to speak to Stone. Stone had wanted to know what was so pressing and they said that Sam was going to be pleading guilty. John said “a man takes responsibility for his actions” and that Sam needed to do the same. And under different circumstances, John saying that would have been laughable only no one could laugh after seven kids were shot and two were killed.

Stone had gone to see Sam for himself because he wanted the teenager to understand how he would be tried as an adult and spend the rest of his life behind bars. Sam got all of that. He just no longer cared because his family was broken and so all he could say was that he hadn’t even wanted to go to school that day. His father had told him that a man wouldn’t hide and when that hadn’t worked he said he should never have wasted his time with Sam. Sam then internalized that to mean the rape hadn’t worked because he still wasn’t a man and so that’s when he put the gun in his baseball gear. He mentioned all of this to Stone in passing because he was angry with himself and that means he never suspected that Stone would use what he said.

Stone believe Jon Conway pushed his son into taking a life and he wanted to go after him. First, he had the detectives talk to Molly and that proved a dead end. The woman blamed herself for what happened because she didn’t think her son would have did it if she hadn’t gone to the police and so there was no chance she was going to talk again. Her other son also wasn’t going to talk. Brian had already lost his brother and his mother had checked out. So Brian was never going to say anything that would cost him the last person he believes he has left. The police were left nothing but Stone still wanted to take the risk. He had John arrested and he put him on trial because Stone wanted to prove that toxic masculinity had more to do with the shooting than just Sam being crazy. The kid was only that way after being pushed into being something he wasn’t.

Stone questioned John and all he could say was that he hadn’t treated his son any differently. He kept going on and on about how he wanted them to be men yet he never said that he wants his sons to grow up to be good men. He ignored that part and so Stone called Sam to the stand. The teenager spelt out his childhood, clearly. Sam was called a girl because his father refused to see him as a son and he mentioned the last thing he heard before he started shooting was “be a man”. Sam had gotten so upset testifying about that he stood up and asked his father what about now. He mentioned how he didn’t even flinch and does that make a man now? The testimony had been very moving and it was enough to get the jury to see how toxic that household was. They found John guilty for the part he played in the mass shooting and so Sam finally got justice.

It was just heartbreaking that it took so much for Sam to be heard.