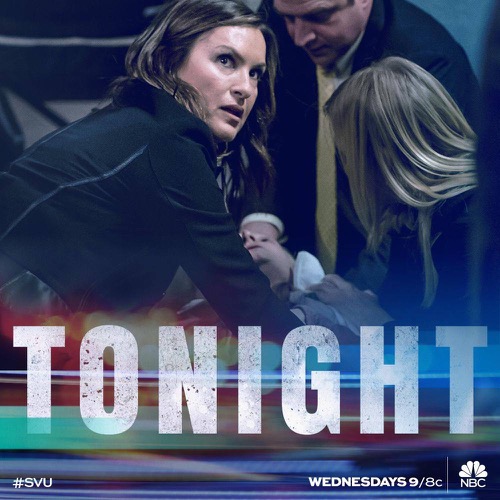 Tonight on NBC Law & Order SVU returns with an all-new Wednesday, January 10, 2018, episode and we have your Law & Order SVU recap below.  On tonight’s Law & Order SVU season 19 episode 10 as per the NBC synopsis, “When the SVU investigates a case involving two students in a special needs school, Rollins discovers that one child’s medical issues stem from a surprising source.”

Noah still has nightmares. He cared for his grandmother and had wanted her to be alright though he was still just a kid and she frightened him when she kidnapped him. It made him believe that any minute he could be in danger and so he’s been spending a lot of time sleeping with his mom since everything happened. Olivia had tried to slowly move him back to his own bed and unfortunately, nothing she did worked because he always woke up from nightmares needing her by his side. Therefore, Olivia hasn’t even been sleeping. She kept thinking about the incident as well as so if it wasn’t Noah’s nightmares then it was her own keeping her awake.

Olivia however still gets some calls from work because sometimes her people needed her help and they clearly needed that with the latest case. The case was shaping out to be unusual if not difficult he said/she said because both parties involved in the incident suffered from learning disabilities and so it was up to the detectives to explain to the difference between consensual sex and rape. Mariel McLaughlin had first stated that she was raped by Cody Hill after the staff at her school caught her with Cody in the supply closet. So Mariel was asked if she knew what rape was and she said she overheard being what happened when a boy put his genitals on her genitals.

Problem was that Amanda then had to ask Mariel if she knew what consent meant with all this confusion and the fifteen-year-old did know what it was. She even said that she wanted to be with Cody because they were in love and that was a sentiment he had also shared with Carisi. Carisi had asked Cody the same questions and he had a better understanding of what sex was and said that he had sex with Mariel because they were just like the Little Mermaid. The Little Mermaid was a mermaid that didn’t have legs who fell in love with her prince. So Cody told Carisi that Mariel was just like Ariel because she was in a wheelchair and couldn’t use her legs.

Cody had believed himself to be Mariel’s Prince Eric and so it hadn’t crossed his mind that while Mariel may have consented she wasn’t exactly in the place to do so what her being underage. He was nineteen years old and it was technically illegal for him to be with Mariel in that way. Even if neither of them understood the consequences of those actions. So finding out they were dealing with statutory rape rather than what they all feared should have been a form of relief, but Amanda noticed something when she followed Mariel and her mother to the hospital. The mother, Dawn, seemed to hover over her daughter in a way that made Amanda believe Dawn was hiding something.

Amanda had initially thought Dawn was just a protective mother and that she was hovering because she cared so much yet she noticed how Dawn refused to allow the doctor at the hospital to check her daughter because she wanted Mariel’s pediatrician to check Mariel and even then she was issuing orders to the doctor that didn’t make sense. She had convinced the pediatrician that Mariel was scared and needed to be sedated when Mariel had been fine. Mariel had actually been calmer than her mother and so Amanda later asked Melinda for her expert advice. She asked Melinda to glance at Mariel’s chart and Melinda ended up sharing her concern.

Melinda had found out the chart was more or less incomplete and that what Mariel’s doctor currently had had also been based on Dawn’s input. Dawn and her ex-husband had traveled from place to place looking for doctors that could help their supposedly sick daughter though the ex-husband had given the files to SVU and it spelled out something much more sinister. It showed that Dawn had purposely moved so many times to claim she had lost her daughter’s records and that way she could feel in the blank for whatever new doctor they were seeing. So that coupled with the tox screen Melinda had also run on Mariel had shown that Dawn had made her daughter sick.

Dawn had fed Mariel drugs over the years to help fake the muscular dystrophy, epilepsy, and that Dawn faked several cases of cancer by using drugs that Mariel lose her hair and puke all the time. So Amanda brought everything to Barba and they forced Dawn to undergo a psych evaluation. The mother as it turns out was suffering from a condition called Munchausen by proxy. She thought her daughter was sick and so she made her exhibit physical signs of being sick so that the doctors could finally take Dawn was saying seriously. And so Dawn didn’t understand that she was hurting her daughter.

Dawn truly believe that she was helping her and that she was the only one that could keep Mariel safe so Dawn had freaked out when they took Mariel away from her. She genuinely thought her daughter would die without her and so Dawn went to go see Mariel at the hospital the moment she was released on bail. Except Mariel hadn’t wanted to her. Mariel had learned the truth by then and had known that her mother was purposely making her sick because it was Dawn that was the sick one. So Mariel had yelled at her mother to stay away from her and that her mother had been the one robbing her of her childhood when the police finally arrived to escort Dawn away.

The police had tried to get a restraining order put in place afterward to protect Mariel, however, Mariel ended up going to see her mother. She went to her mother’s place with her father’s hammer and had later claimed that she tried to reason with Dawn first. Mariel said that she wanted Dawn to understand what she did and why Dawn couldn’t be around her anymore. So Mariel explained to the police that she snapped when her mother said she was never going to let Mariel go and that she hit her mother with the hammer to get Dawn out of her life. And while they all sympathized with Mariel, they knew she killed her mother because of what her mother did to her.

So Barba did put her on trial for murder and he even got Mariel to admit how much she hated her mother to the point where she was now glad Dawn was dead, but Barba realized later on that he was close to sending an abused girl to prison for life and so he came up with a plan. Barba talked about the case in the elevator when he knew three of the jurors would be able to overhear him and that caused a mistrial. And so Mariel was going to have been tried again, only that time she was tried in family court which agreed to give her three years on probation which was what she deserved after everything she’s been through.

Mariel eventually understood what she did was wrong and she admitted that she had even missed her mother now that it was all over.