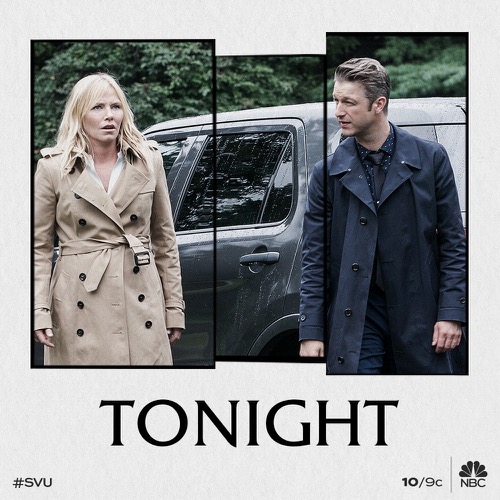 Tonight on NBC Law & Order SVU returns with an all-new Thursday, October 18, 2018, episode and we have your Law & Order SVU recap below. On tonight’s Law & Order SVU season 20 episode 5 called “Accredoe” as per the NBC synopsis, “A member of a women’s empowerment group is found murdered, leading the cops to the group’s charismatic male leader. Meanwhile, Rollins keeps her pregnancy under wraps to avoid going on desk duty..”

Benson called to the scene of a rape/homicide on tonight’s all new episode of “Law & Order: SVU”. The victim was Vicky Parson. She was living in an expensive apartment that she borrowed from a friend and was found on the night she was murdered because her bathtub began overflowing. It seems the perp either knew the victim or persuaded Vicky into letting him in and then from there it became particularly gruesome. She was sexually assaulted with a table leg and was stabbed several times to the point that perp was able to piece of her flesh with him as a souvenir, but with the rape and the overly sexualized crime, this became a case for Benson and her squad. She had taken Rollins with her to the scene and unfortunately the detective had gotten sick when she was saw the victim.

The sight of all that blood had been horrible for her hormones. Rollins was pregnant and she knew that she was supposed to be takings things easy however she hadn’t wanted that to interfere with her work and so she made sure to see the scene despite everyone telling she should stay back. She came to regret her foolishness for rushing it when she became sick and so Carisi was helping her while the others got informed on their victim. Vicky had complained about an ex-boyfriend that was stalking her and the friend that owned the apartment said she saw the ex outside of the apartment. This friend also said that Vicky had joined a women’s empowerment group in order to get her life together and she said this group might know about the ex-boyfriend.

The group was called Accredo. They were all letting their inner-goddess free and were led by someone called Arlo Beck. Beck was apparently hosting a gathering when the police came and he had been very interested in Rollins. Her pregnancy was evident by then and Beck said she was overflowing with nerves because she had been hurt in the past. She hadn’t wanted to talk about herself because that’s now why they wanted to talk with him and so Rollins and Carisi informed Beck about Vicky’s death. The news had shocked Beck. He said he couldn’t imagine anything happening to Vicky and had asked how she died though finding out she had been murdered had something they desperately asked about.

Beck and his second-in-command Lilah had asked the police if they knew who killed Vicky and they were told that the police were suspicious about this ex-boyfriend. They needed a full name for this guy and Lilah had been happy to offer it. She said the ex-boyfriend was Brad Simon and that he recently posted photos onto Vicky’s Facebook page. Lilah had showed them the pictures and there had even been a quote under one of them that stated that Vicky deserved to die. The police had gone to see Brad once they saw everything he posted and he hadn’t had any real alibi. He said he meant someone at the bar and that they had gone back to his apartment. And because he hadn’t known who this woman was, the police arrested him.

They got a search warrant to check his apartment and there they found something very interesting. They found Brad’s clothes with blood all over them and so they thought that was it because they found the killer. They didn’t know until they checked out Brad’s alibi that he had been telling the truth. He had met a woman at the bar and the woman was someone that went to Accredo. Her name was Gina and she later claim that she had no idea that Brad was the same Brad Vicky used to talk about. She said she went to that bar to see if she could face her fears about rejection and that she had gone back to Brad’s apartment, but that he had passed out and she had to call an Uber to get home.

The detectives weren’t sure if the believed Gina and so they asked the young woman about her tattoo. She had a tattoo in the same place that had been cut off of Vicky and the police wanted to know what that was about. Gina said that it was an empowerment symbol and that Vicky had thought of it. It was the tattoo of the letters AHM and it had looked like a brand more than anything. Gina had denied that and so did Lilah and Beck. The two had “joined” the interview and they quickly found a way to shut it down. And that’s what alerted the police. They looked into the group and they found Beck’s ex-wife who left him when he started cheating on her with Lilah. The ex-wife said that Beck had even tried to make her think that the cheating for her own good and she said no one was that charming.

This was Beck’s problem. He used his charm to manipulate people (mainly women) into doing what he wanted and so his ex wasn’t surprised when she learned that he had taken to branding people. Beck probably told the women that it was for their own good and it wasn’t. He didn’t care about empowering them and so the police tried to get Lilah on her own. She ran a yoga class and the police tried to talk to her only she said they were warned about talking to the police. None of them were going to be cooperative any further and the detectives wanted to convince her differently when they noticed a guy watching the yoga class with his camera. The detectives went to go speak to this guy to get him to move on when he said he wasn’t interested in the women and that he just wanted his money back for what they did to his wife Gina.

Gina had paid through the nose to join Accredo. The money would not be refunded and his wife had joined a cult, so the husband showed the detectives what pictures he’s taken as evidence and they ultimately asked to borrow his SD card because they found a photo of Vicky. This photo of their victim showed her on the ground and with Gina stepping on her neck. It was so incriminating that the police brought Gina back in for questioning and Rollins had even thrown Gina on the floor. It turns out scaring her had been enough of a wakeup call that Gina revealed that she had taken the blood from Lilah and had put in on Brad’s clothes. And she also admit that the tattoo stood for “At His Mercy”.

Gina had been convinced of everything because she was told that Vicky was leaving and that she would have ruined everything, but then the police arrested Lilah and Lilah saw for herself that beck wasn’t coming to her aid. He didn’t bother to get an attorney for her much less call her and so she came to the light as well. She told the police that Beck ordered her to kill Vicky and so then they arrested Beck. Then he had gotten bail. His was planning on leaving the country on his private plane and ex-wife for company only his lawyer turned him in. She had also gone to Accredo and she thought Beck was helping her to respect herself. She didn’t see him for what he was until she talked to Rollins and Rollins admitted that she was a hot mess only that didn’t mean either of them should allow a bad guy to get away.

And so the lawyer turned her client in and there went the chance of him ever being free!