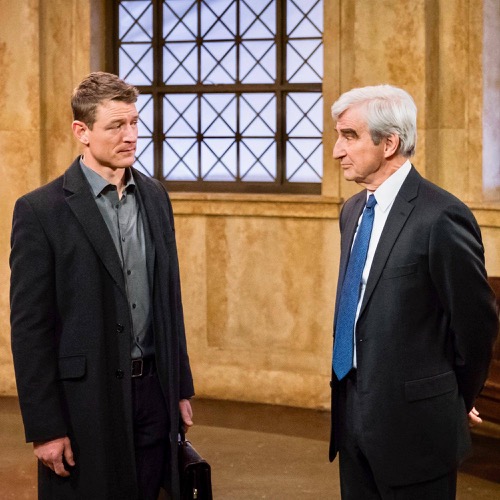 Tonight on NBC Law & Order SVU returns with an all-new Wednesday, February 7, 2018, episode and we have your Law & Order SVU recap below.  On tonight’s Law & Order SVU season 19 episode 13 as per the NBC synopsis, “When an infant goes missing, the SVU finds themselves taking sides in a family’s right-to-die court case. Meanwhile, Barba’s interference in the case puts the entire DA’s office in jeopardy.”

Lt Benson and her team were called to the scene of a familial kidnapping on tonight’s all-new episode of “Law & Order: SVU”.

Maggie Householder had gone out to do some light grocery shopping and had asked the teenager down the hall to watch her ten-month-old son Drew. However, Maggie’s husband Aaron came home early and pulled a gun on the babysitter. He then tied her up and left her in the cupboard though not before kidnapping his own Drew. Drew unfortunately suffered a genetic condition that meant he needed to stay near his breathing mask or risk dying and still his father kidnapped anyways. He hadn’t bothered to pack any of the things that the child would need and so his mother, upon learning he had been kidnapped, had demanded that her son be found immediately. She no longer trusted her husband.

Maggie was her son’s primary caregiver and she admitted that she spent most of her time at Mercy Hospital with Drew than she did at home, however, the fact Aaron had taken him the way he did had made her suspect him and his motives. She suspected her husband wanted to harm their son and she wouldn’t explain why she thought so or the state of her marriage. Aaron could have taken his son out of revenge and so Benson needed to ask some difficult questions even if she did find Maggie sometimes stonewalling her. The lieutenant just assumed that Maggie was in the state that she was because she was scared and that was emotion Benson understood. Benson’s own son had recently been kidnapped and that too had been a familial kidnapping.

Her son had gotten kidnapped by his grandmother that refused to accept Benson’s rights as his mother because Ben had only been her son’s adopted mother. So Benson sympathized with Maggie and she hadn’t wanted baby Drew to miss out on knowing his mother or his father. That’s why she didn’t want too drastic actions when they did find Aaron. Aaron had taken his son to a bridge or even out of the state. He merely brought his son to a house that had had its own equipment for his son and so seeing that Aaron still cared was what helped Benson make her next move. She called the house and she asked Aaron if she could come in. She told him that she wouldn’t bring a weapon and that it wasn’t a trick.

All Benson wanted was the opportunity to talk face to face and so Aaron later allowed her in. He too had wanted to talk, but first, he wanted Benson to see his son because he wanted her to understand why he had taken him from Maggie. Maggie, it seems had withheld a few things. Like how she had asked the courts for the right to euthanize their son. Their son was blind, deaf, couldn’t breathe without a tube, and was in a tremendous amount of pain that wasn’t ever going to get better because he was dying as it happens and Maggie had wanted his passing to be peaceful while her husband still remained hopeful. Aaron believed that modern medicine was coming up with new things all that time and that it wasn’t fair to euthanize their son when a cure could be found.

That’s why he had taken his son! Aaron had told his wife that he would respect whatever decision the judge made and had changed his mind because he couldn’t look at his son and see nothing. He thought that was what his wife was doing and so he asked Benson not to hand his son back over to her because he thought his wife was the one that was going to hurt Drew. But Benson had to take him in and she also had her detectives bring Maggie in as well. She had withheld crucial information and no one was honestly sure who was right or wrong. The team had been split down the middle on whether Maggie had the legal right to kill her son and ADA Rafael Barba wasn’t sure if he should prosecute her husband.

The husband hadn’t done what he did out of spite. He had done it because he had been scared and not because he didn’t love his wife. He still loved her and she still loved Aaron. They just disagreed on how to handle their son’s passing and so Barba was torn. He had later talked to his old mentor Jack McCoy to ask him what he should do and McCoy said he should offer Aaron probation. That way he could do community service and wouldn’t have to be far from his family when the worse finally happened yet Barba couldn’t just leave things at that because he remembered another case some years ago when he had argued against euthanizing some deemed brain dead. He had told the jury at the time that where there was life, there was hope and he had won the case.

Barba now doubted that decision to take that case because he realized he had never cared about the man’s suffering or whether it would have been better for him to die. He had only cared about keeping the man alive no matter the cost. So he visited the hospital to talk to Maggie Householder and he found her in pieces. She had recently gotten word that the judge claimed he needed to appoint an advocate for Drew and she knew the judge had done to prolong the case. Neither that judge or any other judge had wanted to make a decision on such a delicate issue and so Maggie blamed herself for what Drew was going through.

Maggie had been warned when she was pregnant that her son had a small chance of inheriting the genetic disorder and she had ignored her husband at the time that had said she go ahead with the abortion. She had thought her baby could have beaten the odds and unfortunately he was wrong. He was born sick and now no one wanted to go ahead with ending his suffering, but Barba had been in the room with her and he told her that he wouldn’t judge her if she turned off the baby’s support. It was right there next to them and she simply couldn’t do it. So Barba told her to leave the room and he did it.

Barba pulled the plug on baby Drew and his old office took him to court for it. They even brought in a special counsel to try him for second-degree murder, however, the jury found him not guilty and he realized that his place was no longer at the District Attorney’s office. Barba quit his job tonight because he finally saw that the world was more than black and white so he knew he had to say goodbye he had paid for himself in order to start over.